Posted on 29 October 2018 by Jon The Blogcentric One comment 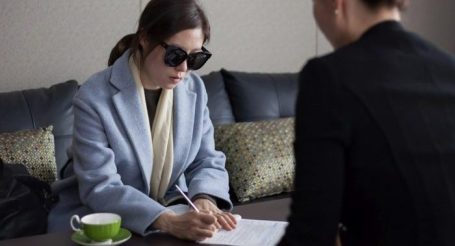 The Running Actress is about actress Moon So-Ri and her coping with ageism and her ‘yesterday’s news’ status.

I’m not too familiar about the Korean movie industry. However The Running Actress does offer some interesting insights.

The film is divided into three acts. Act 1 consists of Moon going on a hike with two friends. Then they soon run into producer Won Dong-yeon and two of his colleagues. Later all six of them go on a dinner together. However the dinner is discomforting to Moon as all they focus on is her looks and having her work in their film for free. She’s unhappy about it and on the way home, she has the manager stop the car and she runs out!

Act 2 is all about the discomforts of fame, especially past fame. She has to deal with past images of her in the limelight. She also has to deal with the fact she hasn’t had a role in so long, and the first role to come in recent times is for her to play the mother of an adult child. At her age? She tries to get a loan, but is turned down. She tries to use a sick estranged in-lay for assistance, but it comes to no avail. Home life with her husband and small child is no escape from all the pressures. At the end of it all, she is back in the car with her manager and again demands he stop the car. She runs out screaming again!

Act 3 is at a wake for a director she worked with during her young-and-famous days. She doesn’t plan to stay there long because she wasn’t on good terms with the director. However noticing the small size of the wake — just her, his wife and son — she stays there longer. She even starts up a conversation with an old acting acquaintance.  Then a younger actress who the director has last worked with comes in and mourns out loud. She later joins in a conversation with all and it turns ugly as the director’s widow has a lot of wrath towards her. The film ends with Moon and the young actress walking together in friendly conversation.

The funniest thing about this film is that it makes the Korean film industry so bitingly close to that of Hollywood. I may not be very familiar with the Korean film industry or how it operates, but this film is a reminder that judging an actress by age isn’t simply a Hollywood-only thing. I can see that happening in Korea especially since we have this whole K-Pop phenomenon. Young singers handpicked mostly for their youthful looks and then trained for four years as an act together to top the charts. I can easily see how the Korean film industry can be very youth or young-adult oriented. I don’t know what types of movies they shell out in Korea but I can see it happening.

In the meantime there’s Moon So-Ri. She had it big for so many years and then she lost it. She’s so starved for money, she has to rely on an estranged ailing in-law for help to get it. Her slate of film roles dry up because of her ‘yesterday’s news’ status, and her only chance is playing a mother of a young adult. Interesting that Hollywood wouldn’t be the only film industry to be as judgmental as that in terms of an actress’ age.

At the same time, it not only tackles the dark side of the entertainment profession in a humorous way. It also pokes fun at the emotional reactions of those involved too. Moon herself has her moments where she just can’t hold it in and just lets it out. Even at the funeral for Director Lee, there are the over-the-top emotional reactions from those as well. It really shows how interesting the people in entertainment are like.

The star of the film is Moon So-ri. She wrote it, directed it and stars lead in it. In actuality, this film was actually three short films Moon did as she was completing an MFA program at Chung-Ang University. I think she did a smart thing by putting the three together and creating a feature-length movie. It’s humorous and smart. It draws on some of Moon’s own experiences, but also includes some fictionalizations too. She does a very good effort as a whole here. The supporting players also do a good job in their own acting here. She even has her own real-life husband Jang Joon-hwan play himself in the film. It’s also interesting real-life producer Won Dong-yeon agree to be in it. I think he probably agrees with the message.