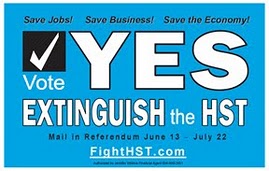 Some of you may remember a while back I did my own personal rundown and observation of the HST referendum in British Columbia. It was done just a few days after the last mail-in day. However the wait to find out the final result seemed to take forever.  Nevertheless the result was made public since Thursday. The citizens of British Columbia voted ‘Yes!’ to extinguishing the HST. The decision was 55%. However there are many economists that believe that reverting from the HST back to the GST/PST system will have both positive and negative impacts.

On the positive side, many businesses will like the reversion back to the GSTR/PST system. I myself have heard of many business owners talk of how unhappy they are with the HST system and how it cost their business. In fact a recent article in the Vancouver Sun written by Don Cayo said that restaurants and the builders of high-end homes should the most notable businesses to win big with the reversion. The total tax customers pay retailers will definitely boost sales businesses. Customers themselves will now have to pay less like they did in the days of the PST/GST.

Even though it was noted a while back that businesses should will big on the customer end of things, they will face higher costs as the PST they pay on the items they buy to run their business will either be swallowed or more likely passed to customers. Even back in the original days of the PST, there were some mind-boggling complexities like in the case of tax exempt items like children’s clothes or for women’s dress fabric. Also one economist pointed out it will cost $30 million to reinstate an infrastructure that was split. Also under the HST, businesses could report and remit taxes twice a year instead of multiple times with the split tax system. There’s even the case liars may take advantage of the old system again. Even in the case of manufacturers, costs they used on materials are rebated with the HST but weren’t in the PST days.

As a BC citizen, I too know about experiencing the HST. As annoying as it is to pay 12% on things that used to be only 7% or 5%, I am open to insights on both sides of things. I’m glad Cayo repeated those points that were commonly spoken by economists and business people. Whatever happens in the future, it will be a gradual process. BC Premier Christy Clark promised that the HST will be extinguished by March 31, 2013. What it paves for the future of British Columbia, only time will tell.