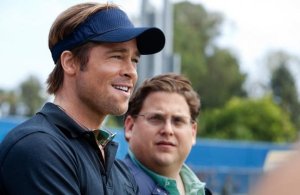 We are all told at one point in our lives that we can no longer play the children’s game. We just don’t know when that’s gonna be. Some get told at 18, some get told at 40, but we’re all told.

I don’t know about you but I don’t understand the whole deal about sports and the dollar. One thing I do know is that the mix of sports and money has sure changed professional sports in the last 40 years. It’s the reason why a franchise stays in a city or moves. It’s the reason why stadiums and arenas are now named after corporations. It secures broadcasting rights and merchandising marketing rights. It’s led to numerous league strikes; two of which either prevented a season from happening or ended a season prematurely. Most of all, it has the biggest bearing on how far up the league a team excels. Major League Baseball player-turned manager Billy Beane was the subject of the book Moneyball on his experience as a manager and introducing the use of sabermetrics in managing the Oakland Athletics team of 2002. It’s been made into a movie starring Brad Pitt, Jonah Hill and Philip Seymour Hoffman and it’s worth seeing.

The movie begins just after the Oakland Athletics were eliminated from World Series play in the 2001 American League Division Series by the New York Yankees; a team with three times the money as the A’s. After losing its three star players to teams with bigger money, general manager Billy Beane tries to assemble a winning team with Oakland’s limited budget but is irritated with his scouts’ decision making. Billy does have a personal issue with baseball scouts. When he was 18, he was scouted out as a phenomenal talent and was signed up with MLB, foregoing a promising college education. His career as an MLB player didn’t pan out and his promise was never realized. After retiring from baseball having played his last game with the A’s in 1989–ironically the last year the A’s won the World Series–Beane became GM of the team years later.

Upon visiting the Cleveland Indians, he meets Peter Brand, an economics grad from Yale with radical ideas in scouting baseball players but is very inexperienced with the business of Major League Baseball. Billy is so impressed with Pete’s thinking and choosing–including how Pete would draft Billy– he hires Pete as assistant GM. Pete’s assessment of players via sabermetrics, statistical analysis of players, and his ability of noticing qualities in players most MLB scouts overlook impresses Beane and helps him make some good player choices. However the scouts at the A’s and manager Art Howe are unimpressed with their use of sabermetrics and believe it’s effectiveness is trumpted by team play on the field. Despite it all, Beane has hope in Pete’s influence on his choices.

The beginning of the 2002 season does not look well. Oakland finds itself in the lower rankings at the early part of the season. Mostly it’s because Howe’s roster decisions conflict with that of Beane and Brand. Even as the A’s find themselves in last place in their Division, Brand still believes his prediction that the A’s will make a huge turnaround in July. This comes as a problem as Howe is still stubborn in his choices. This leads Beane to make tough trading choices for his more struggling players while Howe favors. Beane even gets Brand to tell a player he’s traded.

Now with the new set-up happening in Beane’s favor, we do see a turnaround. The A’s start winning, winning and winning. After winning their 19th straight game, they’re poised to break an MLB record for longest winning streak. One thing Beane notices is that whenever he’s at an A’s game, it’s bad luck for the team. This is the first game of the streak he attends. They have an 11-0 lead when suddenly things go wrong. Error after error happen and the game goes into extra innings. Nevertheless the miracle happens and the streak record is there’s. But it doesn’t stop there. The A’s find themselves back into the running for the World Series playing the Minnesota Twins in the ALDS. They hope it’s not a repeat of what happened to them against the Yankees the year earlier. This also appears critical since this could be whether Beane is kept on as the A’s GM. The game doesn’t go as expected and the aftermath doesn’t either as Beane rejects an offer from the Red Sox to stay with the A’s. I’ll wait for you all to see the movie to find out how much the BoSox offered Beane.

Without a doubt the biggest theme in the movie is money and how it’s changed the sport forever. It plays a role in how it makes certain teams excel further than others. It plays a role in how new players are selected and often enough it’s about their marketability instead of skill. When I saw that scene at the beginning when Oakland’s scouts are choosing players based on image, I asked: “Since when did playing sports become showbiz?” It plays a role in how players are hired, traded and terminated. It even tempts young players, like Billy himself back in 1979, into making an all-or-nothing decision where only time decides if it’s the right choice or not. Sometimes it pans out and sometimes, like in Billy’s case, it’s the deal with the devil. It even causes a power struggle between the managers and the coaches. Often the biggest team issues are more off the field than on the field.

As much as the mix of sports and money is the predominant theme of the movie, it’s also trying to introduce something new into Major League Baseball. Now Major League Baseball has to be the sports league most reluctant to change. While every other baseball league uses aluminum bats, MLB is still strictly wood-only. Drug testing was only introduced in recent years. Even decades ago, video relays and the lights at Wrigley Field caused huge debate. Now for Billy and Pete to introduce sabermetrics via computer into use on their team, even that comes into question with the men with traditional mindsets. I’m sure sabermetrics has attempted to make its way in before even without computers but it never really left much of an impact. Even after it helps the A’s break the winning streak record, it’s still debated after the A’s were eliminated from World Series play. Eventually it does become accepted by some, but not in a way expected.

Another theme that gets overlooked in this movie is about personal relations in such a cutthroat business. Billy has to be a cutthroat fiery worker if he’s to be a manager of a Major League Baseball team. Nevertheless in this fierce business, he’s able to befriend Pete. Interesting since Billy is fierce and cutthroat while Pete is shy and reserved. The movie is also about how Billy comes off as a father to his daughter. You can tell how much of a bond that means to him.

The best quality of the movie is how it’s able to make a story that’s very smart very winning on screen. It’s able to take a very intelligent and very popular topic and create a story about it that’s able to entertain audiences and keep them in suspense. It’s able to have an ending that’s different from your typical Hollywood ending and still come off well. Scriptwriters Steve Zaillan and Aaron Sorkin did an excellent adaptation to make a story thrilling with unexpected turns. Bennett Miller also did an excellent job of direction. Mychael Danna delivered and excellent accompaying score. However the movie’s best quality is its acting.  Brad Pitt did a very good job in paying a role that wasn’t your typical Brad Pitt role. Jonah Hill was also excellent in a role that was different from the ‘big goofball’ roles he’s been known for. Philip Seymour Hoffman again becomes the character in his latest role and again pulls it off excellently. It’s this type of work that has to make Moneyball the best baseball movie in years.

Moneyball is definitely this fall out-of-leftfield surprise winner. Even if you’re not a baseball fan, it will open your eyes about sports and actually get you hoping for the A’s. Even if you don’t like baseball, or movies about it, you’ll find something to like about it.