Posted on 26 November 2012 by Jon The Blogcentric 2 comments 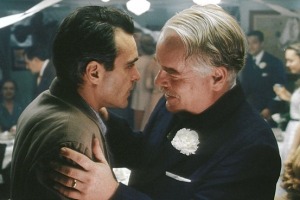 The Master looks like it’s meant as a depiction of a religious leader of a controversial religion. The question is how true is it? And does it succeed in getting the message across?

Freddie Quell is a Navy veteran who returns home from World War II with an uncertain future and unsettled behavior. How unsettled? He gets violent at the drop of a hat. He’s an easy drunk whose favorite drink is a personal mix of alcohol and other various chemicals. He’s sexually obsessed with sex to the point he masturbates frequently and loves making women out of beach sand just to seduce. Life back in the US is not easy for him to get back to normal. He loses his job as a photographer after starting a fight with one of his customers. He loses a farming job after one of the elderly farmhands gets poisoned from his drinking concoction. Is there any chance for him?

One day he stows away on a ship but it’s not just any ship. This ship is a yacht owned by Lancaster Dodd, a religious leader of a philosophical movement called ‘The Cause’. Dodd allows Freddie to watch the marriage of Dodd’s daughter as long as he makes his mysterious brew for him. Dodd sees a way of getting Freddie into the movement. Dodd asks some deep questions about Freddie and his past, called Processing, which he hopes to heal Freddie’s traumas. Freddie tells Dodd some dark truths about his past and Dodd doesn’t flinch like most. Freddie is blown away by Dodd while Dodd takes a liking to Freddie. Dodd agrees to make Freddie part of The Cause and Freddie becomes an active member in it recruiting other people.

The one problem is that members of The Cause are hoping to improve Freddie’s irrational behavior and he shows no signs of improvement. One example is Freddie assaults a man at a hotel some time after he questions Dodd for his beliefs. Dodd’s wife Peggy tries to make a deal with him that he quits drinking if he wishes to stay. He agrees but shows no intention to quit. Freddie even criticizes Dodd’s son for rejecting his father’s teaching but the son believes he makes it up as he goes along. Dodd is later arrested for practicing medicine without a license and Freddie is arrested for assaulting the officers pursuing Dodd. The time in the jail cell is hard as Dodd and Freddie are in opposite cells. Dodd tries to calm a violent Freddie down but Freddie questions him in a tirade and accuses him of being a fake. Both trade insults in the end. Freddie and Dodd reconcile upon release but those in ‘The Cause’ become more suspicious of him.

Freddie continues with The Cause and its exercises but becomes more frustrated when the results don’t work. Freddie helps Dodd in spreading the word on the street and on the radio. However things turn nasty when Freddie assaults a book publisher who criticizes Dodd’s book. Dodd himself event becomes temperamental around critics of his books.

Already there are strong signals that Freddie is ready to leave The Cause. It came when Dodd gave his colleagues an exercise of motorcycling in the desert to an object in the distance and Freddie cycles away. Freddie returns home to rekindle his relationship with Doris, his girlfriend he wrote to during the war, but learns she married and started a family in the seven years since she lost contact with Freddie. However Freddie has a dream of Dodd telephoning him in a movie theatre and telling him he’s in England and Freddie must join as soon as possible. Freddie goes to England and finds Dodd with wife Peggy. Peggy believes Freddie should leave The Cause since he’s made no improvement. Dodd agrees but still taking a liking to Freddie and gives him an ultimatum: stay and devote his whole life to The Cause or leave and never come back. Freddie leaves and is left to follow his own path.

Once again Paul Thomas Anderson writes and directs an excellent effort. Ever since he burst onto the filmmaking scene with Boogie Nights, he was continued to impress with Magnolia, Punch Drunk Love, There Will Be Blood and now again with The Master. One thing Paul Thomas Anderson succeeds in doing again is captivating a svengali-like character. We’ve seen it before in There Will Be Blood where he was able to capture Daniel Plainview and his desire to use and manipulate his way to the top and ultimately face a downfall. We see it here again in Lancaster Dodd who succeeds in being the one in control and convince his followers to his sayings, even if they know they’re a lie. Philip Seymour Hoffman does his own part in making this svengali-like character come to life. He fills the character up with the charming controllingness very common in many svengali-like figures or leader-like characters. That’s a common trait of Philip Seymour Hoffman to embody the character completely. He’s done it in the past to exceptional results and he does it again here.

Just as good at capturing a character is Joaquin Phoenix. He did a good job of playing a very lost character: a navy officer returning from World War II disturbed and uncoothed in behavior. This movie is just as much about the controlled as it is about the controller and Joaquin did a great job in holding his own well despite the easy upstagings of Hoffman. Also good at stealing the scene was Amy Adams. She did an excellent job of playing the wife who was both a controller and the controlled. Another standout effort of the film was the original music of Radiohead’s Jonny Greenwood. He has done music before for There Will Be Blood and he does another excellent work.

As for the movie, it wasn’t that big of a hit at the box office. That’s one of the difficulties of films around the Oscar period from now leading up to the beginning of the new year. Most of the top contending movies for the Academy Awards consist of movies with standout efforts in acting, directing and  scriptwriting. However they face the difficulties of trying to win a crowd at the box office which is loaded with mostly commercial fare and the stuff to attract big crowds. It’s trying to compete for that attention amongst the noise. The Master hasn’t been so fortunate. It has only made $15 million at the box office. That’s part of the trials of putting serious fare out.

The Master is a very intriguing movie resembling a popular religious movement and its founder. It could shed a light on the movement and even capture what the founder may be like but it does more, and that’s its best quality.