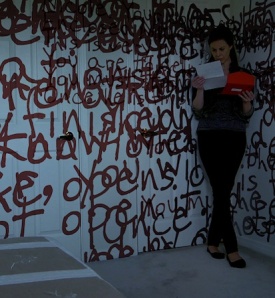 Michelle Giroux reads a letter from a secret ‘friend’ in the Canadian-made Blood Pressure.

Even though I’m excited about the summer fare in movies, I’m also interested in what the independent movies have to show. Blood Pressure is one. Shown at the VIFF Theatre in Vancouver, it’s Canadian-shot, Canadian-produced and Canadian-made. But is it one film for those who want to get off the beaten path?

The film begins with the reading of a letter addressed from ‘a friend.’ It’s to a woman named Nicole. The letter from this ‘friend’ appears to be one who knows a lot about her. The ‘friend’ knows she’s a pharmacist and married mother of two living in a Toronto suburb. The ‘friend’ even knows where she graduated from. The friend also knows she’s not too happy with her job and her family life. You’ll soon see the friend is right. She’s not happy with her marriage or her job at a pharmacy. The one person she can confide to is retiring from the pharmacy.

Interestingly the ‘friend’ knows what to give Nicole as this ‘friend’ gives her a card for a complimentary massage and a manicure. The friend even knows of her wishes as just days after talking to her husband about a vacation to Mexico, she follows a set of lights to a chair with a plane ticket to Mexico. And the friend gives her shooting range sessions and martial arts classes. The ‘friend’ then asks of her to do things to prove her loyalty such as set up a flyer in the mail a certain way. Then the requests get bigger as the ‘friend’ asks her to observe a young man with a cane in a cafe at a certain time. Then the requests become even more voyeuristic as the ‘friend’ asks Nicole to observe the man while talking on the phone without being noticed. It didn’t work and the friend asks her to view the man in his bed at a certain time and be very observant.

However this fixation of these letters starts to bear down on Nicole’s life. The shooting sessions and martial arts classes work for her and even improve her relationship with her daughter. However it’s leading to difficulties in her marriage and even disputes with her boss on the job. Then the moment when she can finally find out who the friend is: a request to give the man an envelope at the cafe. It’s there she finds out that he’s the friend but it’s at his hotel suite she finds out why. At the suite she learns of this man, Darryl Saunders, and of his debilitating physical handicap. He is impressed with her loyalty to him and gives her one last request: kill him.

Nicole doesn’t know how to take this request. She tried looking up his medical information only to learn of a Daria Saunders instead, who is Darryl’s deceased wife. Meanwhile she develops feelings for the man and has simultaneously won over the attraction of her pharmacy boss. This even has her husband suspecting an affair. This all leads to a surprise decision from Nicole which leads to finding out another surprising truth about Darryl. The end result is one that will surprise you and the movie ends on a note that can leave the audience deciding for themselves how it all ends.

This film is a very good example of a creative idea paying off. It all started with an idea from scriptwriter Bill Fugler from an idea while talking with writing friends at a café bookstore. Co-writer and director Sean Garrity added narrative elements to bring the story to the big screen. It was originally to be filmed in Winnipeg when a sudden career change with his wife led to shoot it in suburban Toronto: Richmond Hill to be exact. Jonas Chernick was cast to be Darryl. Michelle Giroux, a friend of Jonas Chernick, was a stage actor and originally only read with the male actors during pre-production. Garrity was so impressed by her reading, she was cast as the lead. It was an excellent choice as Giroux owned the film. She was given a very complex lead role that spoke volumes even when she wasn’t speaking at all and she delivered excellently. Jonas was also good as the hurting Darryl as was Jonah Katz as the struggling husband. Tatiana Maslany did an excellent job of portraying a teenage daughter despite being much older.

After seeing Before Midnight, I was tempted to think that Blood Pressure was about reaching middle age in today’s world and the emotions that run through people. Even though Nicole possessed a lot of feelings and frustrations one would have at middle age, it’s not what this movie’s about. It’s more of a psychological thriller that uses human emotions to keep the audience thrilled instead of special effects.

One thing unique about Blood Pressure is its surprise success. The film made its big screen debut at the Busan Film Festival. It was screened in Garrity’s home city of Winnipeg in February 2013 to sold out shows at Cinematheque cinema which led to a screening at the Grant Park Cinema weeks later. The film would soon have popular screenings in Toronto in March. Its success in Toronto and Winnipeg has led to other screening nationwide including Calgary screenings and a Vancouver debut on June 29th. I actually thought something like this would make its Vancouver debut at the VIFF. looks like its buzz made it happen faster.

Blood Pressure is a surprise for the summer but not on a large scale. Those interested in Canadian film will like this. This is an excellent triumph for Manitoba filmmakers.