Disasters In Canada: Three In One Month

Even though it is a good thing, Canada is not normally famous for its disasters. Yes we’ve had the Halifax Explosion, Hurricane Hazel and the Winnipeg Flood of 1950 but they don’t come that often. These past few weeks were a rare exception as Canada had three sudden disasters to deal with.

Much of Calgary’s downtown including the Stampede racetrack and saddledome was flooded out in  the worst flooding in Alberta’s history.

Alberta’s rivers are not known for their floods. However heavy rainfall throughout the province of Alberta from June 19th to 22nd led to the worst flooding in the province’s history. Seven major Alberta rivers including the Bow and Elbow Rivers were filled hard and were over flooded to the point they caused huge damage to surrounding cities. The damage done to the city of Calgary received the most coverage especially since the flooding damage hit the downtown core bad. That and the fact that the annual Calgary Stampede was about to start. The stampede grounds endured considerable damage. Even venues like the Scotiabank Saddledome reported flooding up to the tenth row. In fact 26 surrounding neighborhoods around the Calgary area were placed under a mandatory evacuation order for three straight days. The 75,000 evacuees made it the largest evacuation in the city’s history.

It wasn’t just Calgary. The town of High River had to evacuate. The Siksika First Nation east of Calgary had to declare evacuation. Even towns of Banff and Canmore had to be cut off after floods and mudslides cut off much of the Trans-Canada Highway. Even cities like Lethbridge, Red Deer and High River had to declare their states of emergency. The flooding resulted in four fatalities in total.

The towns and cities continue their clean-up in the aftermath. One thing that did happen is that the Calgary Stampede went on as planned. Events planned for the Saddledome however were either cancelled or relocated to other locations in the city. 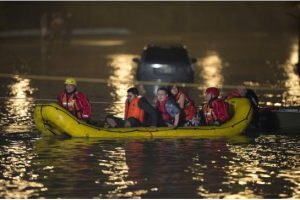 Monday July 8, 2013 was expected to be like any other day in Toronto. If there was to be a thunderstorm, it was expected to be brief and pass by. However the afternoon provided some of the most serious thunderstorm activity faced by Toronto. Rain was delirious. Rainfalls ranging from 97mm in downtown Toronto to 126mm at Pearson Airport caused major flooding in many areas including the freeways and the subway stations. In fact news images showed a GO train with 1400 people that was caught in the floods. Power outages were rampant as 80% of Mississauga was without power as was 300,000 other people who received Toronto Hydro. A big surprise for a city that normally gets an average of 74mm of rain in the whole of July. Fortunately the floods have subsided and fortunately there were no fatalities.

I saved to worst for last. Until a week ago, Lac-Megantic was a simple small town in Quebec close to the Canada/U.S. border. Since the early morning of Saturday July 6th, it’s the centre of possibly the biggest train accident of the year and continues to make more bad news with each day.

It was a simple train trip done many times before: a trip transporting oil from the United States to New Brunswick. Lac Megantic was just simply a town where the train was to pass through without disturbance or incident of any kind. The train set consisted of 72 tanks each filled with 113,000 litres of crude oil and had been transferred from train system to train system. 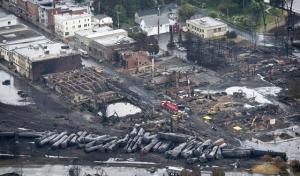 Burned out buildings and burned out oil tankers lay in the aftermath of a train derailment in the downtown of Lac-Megantic, Quebec.

Two hours before the incident while the train was parked in Nantes, the engineer left the train as he was done his shift. He felt however that it was unsafe since it was spitting oil and thick black smoke and wanted to call an American official about directives for the situation. Actually drivers who were driving along the train 40 minutes earlier complained of thick black smoke coming from the train. The Nantes Fire Department put out the blaze at 11:30pm and the train company employees confirmed the train was safe. However one failed to notice that the locomotive was tampered with. The train tanks, detached from the locomotive, started moving downhill at witnesses considered a dangerous speed. Then the unmanned train derailed in an area of downtown Lac Megantic, the tanks collapsed spilling crude oil on the ground and cause a huge fire 91 to 121 meters in diameter. Between four to six explosions were heard and heat from the fire could be felt as far as two kilometers away. Over 1000 of the town’s 6000 residents had to be evacuated. People in the third floor of burning buildings jumped to avoid being caught in the blaze.

Even as of now, there are no final statistics and new information is being gathered every day. 35 people have been confirmed dead but 15 remain missing. Thirty buildings in the downtown of Lac Megantic have been destroyed by the blaze. Information has surfaced that the locomotive is believed to have been tampered with. I’m sure more clues will come up in the future.

With every disaster comes action. Not just action from emergency crews but action from all those involved including officials from the various industries affected. Here’s some of the action that has been taken so far. Remember these incidents happened three weeks ago at the most so there is still more action to come:

-The province of Alberta has started to create new flood-mapping standards such as categorizing high-risk flood areas. Some homeowners in high-risk areas are offered to move from their current location with financial assistance from the province or risk being ineligible for any future Disaster Recovery Fund assistance. Homeowners will be given new regulations in the future such as notating homes for sale being in a possible flood-risk zone. Even developers will be made aware of high risk areas.

-The City of Toronto will have to do some rethinking and reassessing certain aspects of the city. Especially the drainage system. Also Toronto transit will have to organize a better system of escape from its trains and subways to avoid a worse scenario. One thing is train riders who had to travel on the still-wet trains the following day were given a $100 credit to cover whatever dry cleaning costs. Hydro One had most of its equipment underground. It will soon review its standards and practices in the aftermath including bringing some equipment above ground.

-Once the clean-up and other activities from the Lac Megantic derailment are completed, you can be sure there will be a full inquiry on this incident. Even without the death count being finalized, this has already become the deadliest train accident in Canada since 1864. Montreal, Maine and Atlantic Railway (MMA) will definitely face the biggest heat from this as well as Transport Canada. Already the Transport Safety Board of Canada has started an investigation on this. The Red Cross has started emergency efforts in the town. Lac Megantic will have to make efforts to rebuild and have makeshift locations for businesses that used to exist before the disaster. You can be sure that certain people will be prosecuted for criminal negligence and the government agencies will set new regulations for dealing with petroleum-filled tanks.

It is a shock to see all of this happening in Canada in the span of one month’s time but it was possible. Nevertheless it is Canadian nature to take immediate action towards something like this. In fact a roof collapse in an Ontario shopping mall last year that caused the deaths of two people made national news and brought fast action. In some countries, you’d need a bigger fatality result to get major action happening. Only time will tell what the end results are and what actions come of these incidents.