By Jon The Blogcentric on 8 October 2013 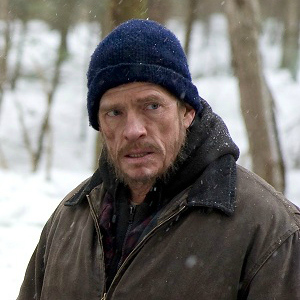 Every VIFF I have a goal of seeing at least one Canadian film. On Friday I chose to see Whitewash, a Quebec production. I didn’t get too big of an accomplishment of a movie but it was suspenseful.

The movie starts with a man walking down a street and a snowplow driving down the road. Then the shocker: the snowplow hits the man. The driver is shocked to see he’s dead. The driver then drives far north to drop the body off into a ditch and cover it with snow. Then the driver travels as far north as he can only to find him stuck in a forested area. The most he can do is make the plow his home and his shelter.

Soon we learn that collision was not a collision between strangers. It was his neighbor Paul. We also learn of the driver’s name: Bruce. Bruce does the first thing he can with whatever money Paul has. Go to a diner to eat. Unfortunately he learns that both he and Paul are in the news as missing people. It becomes apparent Bruce would have to use his stuck plow as a hideout. Over time, Bruce would use other places too like a store to buy all sorts of supplies and a house of a snowmobiling family whom he accidentally scares the daughter and pisses the father off.

It’s in flashbacks that we learn a dark secret of Paul. Paul has a gambling problem and he lost $15,000. He can’t tell his wife. Bruce has problems of his own. He lost his wife to cancer. He also lost his job as a plowman as he drove his plow into a building one night while drunk. He spent time in jail and was suspended from driving anything for one year, His only chance for making money right now are from wholeselling a set of decorations he owns.

It’s after Bruce steals a snowmobile that he accidentally spots a body of a woman frozen to death. Another body to hide, underneath a lake of breaking ice. Then we learn through a flashback of what Paul was doing inside Bruce’s house the night of the accident. This paves way to an ending that is surprising and gets a lot of people guessing their own end to Bruce’s situation.

I don’t think there’s any real social point to make in this film. All it does is tell the story from the protagonist’s point of view of how he’s hiding out and what events led to the fatal collision. Over time there becomes more that meets the eye. The film is mostly about Bruce but it’s also about Paul too. Sometimes it gets one questioning if that was an accident at all or an accident waiting to happen. Did Paul mean to avoid Bruce’s plow or did he think this was his chance for his suicide? The film has us asking.

Another thing to say about the ending is that it is unpredictable. Subtly humorous but unpredictable. We’re all expecting it to end either one way or the other. Instead it ends on a different note. Some will accept the ending for what it is but some will try to draw their own conclusions of what will happen later on. The unpredictable ending is one of the top highlights of the movie. Actually I believe that the unconventionality is the biggest quality of the movie. We all expect that this is one thing but it’s not. We think that the fatal collision was random but it was between two neighbors. We think that it was accidental but it’s possible Paul had a death wish. We all expect Bruce to face some sort of consequence in the end but it ends on a different note.

One thing about the Canadian film industry is that its in a confusing state: a state that’s been like that for decades. There’s the films of Quebec that have been able to chart its own territory and create its own legacy. Then there’s the films of English Canada which has a long way to catch up to Quebec’s level. English Canada knows how to hold its own in music and in television but it’d not able to do as well in film. All too often if they want to create a movie to get attention, they’d have to hire a big name even if it’s American or British. They do hire Canadian name actors but many who had their time in Hollywood that’s past. This is a unique situation where a Quebec director creates an English-language drama/comedy. He hires an American who’s made a name for himself–Thomas Haden Church: most famous for playing a villain in SpiderMan 3 and his Oscar-nominated performance in Sideways– as the protagonist. The rest of the cast are Quebec actors. Even the director and his brother play minor roles.

I don’t know how this will help cinema for English Canada. This may take things forward or this may be a repeat of what’s happening now. I will say it is a very good film in its own part. Emanuel Hoss-Desmarais does a very good job of directing this film. The script he co-wrote with Marc Tulin was very good, very honest and full of moments through both present moments and flashbacks that help make the film very good. In fact Hoss-Desmarais won an award at the Tribeca Film Fest for Best New Narrative Director for his effort. Thomas Haden Church gave a very good performance as Bruce that was very honest. Marc Labreche’s performance as Paul was also very good and honest but the writers could have made more of it. Supporting performances were also good too.

Whitewash is a very good film that may not do anything too new for film from English Canada but it’s a good story all of its own and will keep the audience intrigued from start to finish.