DISCLAIMER: I admit this review is one month old since I saw it back in June. However as you noticed, I’ve been very active in World Cup blogging and I’ve been taking a break from movie reviewing. I’m back to reviewing movies but there’s still one or tow World Cup blogs yet to come. 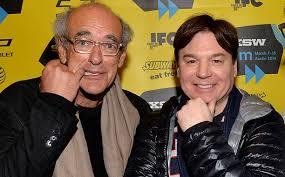 Who is Shep Gordon? Even I didn’t know until I saw the documentary. Nevertheless I decided to give Supermensch: The Legend of Shep Gordon a try after someone gave me passes. Wikipedia lists Shep as a talent manager, Hollywood film agent and producer. The film however presents a more closer look at what he’s done and the life he’s had.

Shep may have a degree in Sociology from back in 1968 but as far as talent and entertainment go, he was the right person at the right time. He was around with some of the biggest names of the late 1960’s. However it was his work as a promoter with Alice Cooper that things really got off the ground. The ‘chicken incident’ of 1969 was what kicked Alice’s fame off but it was Shep who brought the chicken there. Did he know Alice would throw it off?

The thing is Shep always had a way of picking them. His next promotion was Anne Murray once Alice started an alcohol problem. It was unusual for Shep to go from promoting a shock rocker to an innocent Canadian country girl but she worked out too. He also knew of next waves on music as he helped promote Blondie into the limelight. He also helped promote soul singer Luther Vandross to R&B success and even helped him cross over to pop successfully.Interesting how he was able to promote so many musicians from so many genres to stardom.

Another aspect of Shep’s success was not just about his success in music. He also had a hand in working on some of the more critically renowned films. He helped produce The Duellists which was director Ridley Scott’s first feature length film and that catapulted Scott’s directing career that included three Best Director Oscar nominations. Another film he helped produce, the Brazilian-American production Kiss Of The Spider Woman, helped William Hurt win the Oscar for Best Actor and was nominated for Oscars in three more categories. Gordon also created Alive Productions, the first independent film production company in the U.S. He’s also helped on some popcorn movies too like Wayne’s World which is where Mike Myers who directs this documentary first met Shep. In addition to movies and music, he also helped catapult the wave of cooking celebrities in the past couple of decades including Emeril Lagasse with his company Alive Culinary Resources. It seemed like he not only knew how to pick winners but how to make them winners. He could rank up there with the likes of Saul Zaentz or David Geffen.

The interesting thing of this documentary of Shep is that it’s not all about entertainment. It’s also personal too, especially coming from a man who saw a lot of people either damage themselves over success or even destroy themselves. Shep also was known for being quite the debaucherous one. In fact he had a lot of involvement with a lot of showbiz debauchery back in the 1960’s and 1970’s, back when debauchery was possibly the most shameless. However Shep does have a spiritual side. Born Jewish, he devoted himself to Buddhism in the past few decades and has even been a private guest of the Dalai Lama. Another aspect the documentary showcases is that despite his hand in debauchery, and boy was it legendary to those who knew him, he has had a deep desire to be a family man and father a child of his own. He shows that he has it in him to be a father when a female he worked with died young and willingly fathered her children to adulthood. His desire to be a father also had a lot to do with why his two marriages didn’t last long: conflicting feelings with the wife. The film ends with him speaking his desire to be a father of his own.

One thing about this documentary is that it portrays many sides to Shep. One minute he’s this typical brutal conniving Hollywood bigwig doing whatever it takes to get his acts famous. Another minute, he’s a family man to others. Another minute, he’s out starting the celebrity chef craze. Another minute, he’s being spiritual. It shows Shep’s complexity in a unique manner. We see that and we hear it from those who’ve worked with him and with those whom have had him as part of their life.

Another thing about this documentary is that it does show a lot of sides to Shep but it does not piece the puzzle together or weave together in a straight manner. There are times when I felt the documentary bounced around from Shep being a showbiz exec to being this family man to focusing on his desire to have a child. It didn’t really string together to well and it felt like it shift topics too often. Even seeing at the end how Shep talks about wanting to be a father one day makes me wonder what the whole point of the documentary is. Like what’s the main point? Is it about Shep? About his entertainment pursuits? Or his desire to have a family? It was either too much for a biographical documentary or it was unevenly done. I know this is Myers’ first documentary but he could have been done more organized.

I also confess that I first thought this documentary was more of a mockumentary along the likes of This Is Spinal Tap. There were times I questioned: “Was Shep the one behind the whole Alice Cooper chicken incident?” or “Did Shep really discover them or promote them?”I especially questioned Anne Murray because I thought she was Bruce Allen’s promotion. Later on I learned more so I’m more comfortable with believing what I saw.

Supermensch is an interesting and intriguing documentary about the life, times, successes and even the heart of Shep Gordon. However it was not unevenly organized and didn’t make sense to what the whole point of the documentary was about. Sure it had lots of points, but what was the whole point?