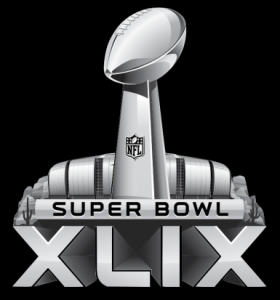 NOTE (Added Jan. 18/2016): Thank you to all the visitors to this post. I didn’t know I’d get so many all of a sudden. To thank you all for hitting this blog, I published my preview of Super Bowl 50 sooner than planned and it’s ready for you here.

Yes, Sunday February 1st will be Super Bowl Sunday. The game that’s both a major event for football fans and a media hype will feature the Seattle Seahawks against the New England Patriots at the University of Phoenix Stadium. Here’s what’s expected:

The XLIX Super Bowl was originally planned to be held in Arrowhead Stadium, home of the Kansas City Chiefs. However this was reliant on the installation of a retractable roof dependent on two sales taxes up for vote. That became something the Kansas City Chamber of Commerce and several civic and business groups voted against. It took until 2011 to decide the host site of the University of Phoenix Stadium with an expandable capacity of 72,000. Idina Menzel, or ‘Adela Nazim’ as John Travolta pronounced it, will sing the national anthem.

The halftime show was a bit of a struggle to assemble performers together. Their original choices for the show sponsored by Pepsi Cola were Coldplay, Katy Perry and Rihanna. However difficulties arose when league representatives asked their agent if they would provide financial compensation in the form of an up-front fee or a cut from their post-Super Bowl concert revenue. At least that’s what the wall Street Journal tells us, as was the ‘chilly’ response from those involved. And NFL spokeswoman denied this but Katy Perry was the only one of the three who has agreed to perform at the halftime show. She will be headlining the show along with special guests Lenny Kravitz and Missy Elliot.

AND NOW A WORD…

With the Super Bowl comes the tradition of their one-of-a-kind commercialfest. It’s been a buzz for three decades possibly starting with Apple’s 1984 ad. Airing a 30-second commercial will cost $4.5 million: $500,000 more than last year and the year before. Although it’s to be expected for auto advertisers to have much of the air time, there will be a lot more first-time Super Bowl advertisers like Skittles, Carnival Cruise Lines, Loctite, Morphie and Wix.com amongst the ten newbies. Movie previews will be another major advertising commodity as Paramount, Universal, Walt Disney, 20th Century Fox and Lionsgate will be showcasing trailers for movies like Terminator Genesys, Jurassic World, Minions, The Fantastic Four and Tomorrowland. 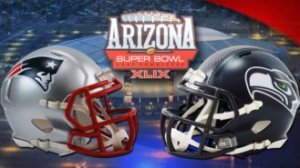 One team is the last to win back-to-back championships back in 2005. One appears poised to become the first team since. Here’s how they fared this season:

The Patriots began their regular season with a loss and ended with a loss. In between was an excellent season consisting of a total of twelve wins and four losses. That put them on par with the Denver Broncos on game stats but came out on top of the AFC because of point differentials. However they didn’t have as many decisive wins as the Seahawks did. Their playoffs started with a close 35-31 win over the Baltimore Ravens but their AFC Championship was a very decisive 45-7: their most decisive victory all year. That was enough to send a message to the Seahawks that they could just block their path to being repeat Super Bowl champions.

The Hawks were last year’s winners with the most decisive win since 1993. As for 2014, like the Patriots, the Seahawks had twelve wins and four losses. So did two other teams in the NFC but the Hawks came out on top because of point differentials, just like the Patriots. Their wins in the regular season have had wider margins than that of the Patriots. However things were different for the Hawks during playoff games. They had a 31-17 win over the Carolina Panthers for the Divisional championships and a 28-22 win in overtime over the Packers for the NFC Championships. That could put the Seahawks consistency in question and have people wondering if their luck.

MY PREDICTION FOR THE WIN

I’ll admit this is hard. It’s not like the CFL where all the teams play each other at least twice during the regular season. This is the NFL that’s loaded with more teams and is most often the case that the two Super Bowl contenders never met during the season, just like this year.

This is often the case where I would have to do a lot of reading up to decide. One thing to take note of is that both teams have had some key losses of players. Seahawks have lost Percy Harvin to trades and both Brandon Mebane and Jordan Hill to injury. Their replacement players don’t have the same defensive tackle and that could hurt if the Patriots are strong in the offense. The Patriots lost Jerod Mayo and Stevan Ridley to injury but have backup players can fill their shoes. On top of it, LeGarrette Blount has returned to the Patriots, giving the team a much-needed boost. I will have to give the win to the New England Patriots but I believe it will be a tight game that could result in low scoring. I predict the score to be 15-12.

So there you have it. My thoughts on tomorrow’s Super Bowl. The champion will be decided tomorrow night. Stay toond.