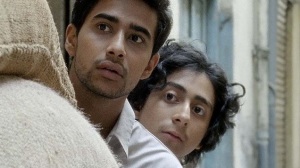 Suraj Sharma, left and Tony Revolori, right, go on a mission in Mumbai of truth and lies in Umrika.

After the VIFF ended on October 9th, I managed to take in a few film festival repeats immediately after. The day after, I saw Umrika and I thought it was an amusing story.

The film begins with Udai, a young adult from India in the 1970’s, leaving his family and younger brother Ramakant for a better life in the USA. The whole village says their goodbyes to him. The family wait a long agonizing time for his first letter. When it comes, the whole village is excited. It’s a letter with pictures of how life is in ‘Umrika.’ The letters with pictures keep coming for years and they’re filled with more exciting stories and pictures. It gets the whole village dreaming. Then suddenly in 1985, Ramakant’s father is electrocuted to death. Shortly after, Rama learns that the letters are all forgeries created by his father and uncle to keep his mother from agonizing. The truth is Udai vanished without a trace in the port city of Mumbai. Ramakant is determined to find him, even if it means his own trip to Umrika.

Rama learns the best person who would have knowledge of the whereabouts of his brother is the man in charge of illegal immigration. However to reach him, one would have to be like a delivery driver or messenger. Rama is opportunistic enough to steal a bike belonging to a delivery driver of a sweets bakery. Rama is the new driver. He’s able to deliver as well as win the favoritism of the man with each delivery he makes. Rama also learns of the dark secret of him, that he’s involved in a crime ring. One deliver Rama made was of a gun used by one of his men to shoot wrongdoers.

Soon Rama finds himself living in an area owned by a restaurateur and his family. The youngest daughter who’s a waitress takes a big liking to Rama. Soon Rama’s friend Lalu comes to visit Mumbai to catch up with him. Lalu has been concerned with Rama since he left. Lalu agrees to help despite film making ambitions of his own. Soon Udai is discovered. He’s a barber working in Mumbai and married to the Himalayan girl of the village, something his mother never would have approved of. Udai revealed he never would have left because of how much it would break his mother’s heart. But the truth cannot be revealed to their mother as it would cause disgrace to the whole family and the village. In the end, Rama, Udai and Lalu devise a scheme to ‘make things right.’ It gives the impression the story ends on the right note.

The film is an impressive comedy-drama. It captures a lot of moments in the right sense. In the first half, it captures the essence of the excitement upon reading the ‘letters’ and it giving American dreams to the village children. It even captures some light humor as they insist on believing the wieners in the hot dogs are actually barbecued carrots. The film switches to drama at the right moment starting with the father’s death and then the truth revealed. I feel the film made good choices in setting the stage for the pursuit when the mother says: “It hurts me to know your brother wasn’t here to light the flame. It should be the oldest.” Despite switching to drama, it does keep the viewer intrigued with Rama’s each move from taking on a delivery job to trying to find his brother. At the same time, it highlights what it is to be young and full of dreams even when it’s faced with stiff opposition and challenges.

I don’t think the film was trying to make too huge of social commentary. However I do feel it did a good job of displaying the corruption and the shadiness happening in the big cities of India like Mumbai. I also found the time setting for the story interesting. Writer/director Prashant Nair starts the story in the 1970’s and then moves to 1985-1986. I thought that was intriguing and wondered why he chose that time period. One thing I especially noticed was the scene inside the restaurant where Rama and all the others saw images of the Space Shuttle Explosion as it happened. Looking back I think Nair was trying to say even devastating moments for the US like this doesn’t stop people from India from having their American dreams.

I feel this is an excellent comedy-drama from Prashant Nair. This is only his second feature-length film and it was very entertaining. It kept your hopes up but ended not how one would expect but on the right note. It’s unique as it becomes a story where Rama doesn’t just search for his brother but chart a path of his own. Suraj Sharma was excellent as the protagonist Ramakant. I will admit it’s not as good as his performance in the Life Of Pi but he played his part well and very believable. Tony Revolori was also good as Lalu and made a great supporting player.

Umrika has had impressive results since it debuted at this year’s Sundance Film Festival. At that Festival, it won the Audience Award for dramas and was nominated for the Grand Jury Prize in the world Cinema categories. Shortly after its premiere, the film was sold by Beta Cinema to a wide variety of countries and became the most widely distributed Indian movie ever.

Umrika is a delightful Indian film that mixes both comedy and drama well. It captures a positive essence and even keeps it alive during its negative moments.