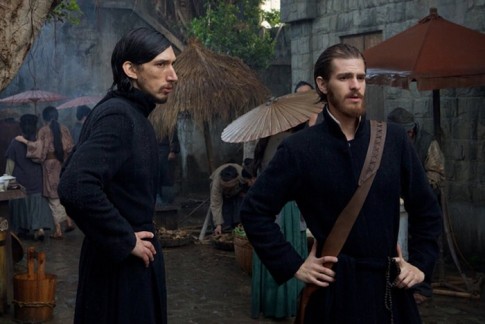 Adan Driver (left) and Andrew Garfield are Portuguese missionaries in Japan whose mission is a huge test of faith in Silence.

Learning of Martin Scorsese doing Silence caught my intrigue: Scorsese doing a film about Catholic missionaries. The big question would be how would it turn out? Would it be pro-Catholic or anti-Catholic? Or something else entirely?

It it the 17th Century. Portuguese Jesuit priests Rodrigues and Garupe  are sent to Japan to spread the faith and to find Father Ferreira. Ferreira was sent as a missionary from Portugal, but has been forced to watch the brutal executions of people he helped convert to the faith and has since apostatized. In their first stop in Macau, they came across one of the converts who himself watch executions happen. He’s now a paranoid alcoholic.

Once they arrive in Japan, they arrive in the village of Tomogi. They learn that Catholics have resorted to an underground church. The people are relieved to see they have a full priest available but the priests learn of the samurai searching out Christians to execute: commonly called ‘The Inquisitor.’

Both priests go to different islands. Garupe goes to Hirado Island to avoid having the village threatened and Rodrigues goes to Goto Island in search of Ferreira. He comes across the man from Macau who betrays him in front of an old samurai. The samurai has Rodrigues and the Catholic converts arrested and taken to a prison in Nagasaki. The samurai warns Rodrigues to renounce his faith or else the other captured Christians will be tortured. The samurai give the Christians a chance to step on a rudely-carved crucifix to renounce their faith. One man refuses and he’s beheaded on the spot. Rodrigues has to witness this from his prison cell. Later, Rodrigues is taken to a shoreline where three Christians from Hirado and even father Garupe are to be executed by drowning. Even though Garupe refuses to apostatize, Rodrigues is horrified by what he witnesses.

Finally Rodrigues gets to meet up with the apostate Ferreira. Ferreira tells him after 15 years in Japan, Christianity is futile in Japan. It’s best that he apostatize. They day before Rodrigues goes on trial, he hears the torture of five Christians who had apostatized. Then the day comes. Rodrigues is brought to trial by the shogun and is presented the chance to step on the crude carved crucifix to apostatize. Rodrigues appears to hear permission from Christ and steps on it. He is distraught. Rodrigues spent his remaining years in Japan married and searching out goods from ships incoming from Europe. His job was to identify Christian items from non-Christian items. The ending will definitely lead to a lot of conversation.

We should keep in mind this is not exactly a true story. Instead this is a film adaptation of a book of the same name written in 1966 by Japanese author Shusaku Endo. Whatever the situation, this is a film that presents a huge challenge to one’s faith. Even one with the strongest of faith and convictions can find themselves questioning what they would do in a situation like this. We should remember this is not a case of Christian martyrdom where the priest is the first to be executed. The followers are executed first as a pressure to get the priest to apostatize. The methods of execution are also horrific such as slowly dousing prisoners in hot spring water slowly and painfully to burning them alive wrapped in grass. I’m sure some would ask what would they do in this situation? Is it a selfish thing to hang on to one’s faith while the others are tortured and killed?

I’m sure a lot of people would be suspicious of a film like this coming from Martin Scorsese. Scorsese has had a reputation of a lot of negative and even blasphemous depictions of Catholicism and the Catholic faith. The biggest controversy was in 1988 when The Last Temptation Of Christ hit the theatres and there were protests galore. This film does not give a negative depiction of the priests. Instead it presents the challenges of faith such as the pressure to apostatize or the treatment of sacred images. One thing about the film is that the ending of the film is sure to give a lot of discussion of the final fate of Rodrigues. They say endings should have you asking questions rather than give you answers. It sure worked here as a lot of debate of the ending has sure come about. Even the end scenes after Rodrigues apostatized prompted a discussion between me and another person. This film will have you talking.

One thing it goes to show about this film is that it shows just how difficult it is for a director to make a labor-of-love film. No matter how many hit movies a director may produce, they still have stories deep in their heart they can only dream of putting on film. Even a renowned director like Scorsese would face such challenges. It’s not just in the amount of time it would take to develop such an idea on film– this film is 25 years in the making– but also the willingness of executives to allow it. We forget that film making is a business first and foremost, and business is ruthless. Even after all is completed, it’s then up to how the general public will receive it. In the end, Silence became Scorsese’s lowest-grossing film since 1997’s Kundun. It is a shame because the film is wonderful to watch and showcases a lot of excellent aspects. The film did make the AFI’s annual Top 10 list of the best films as well as the Top 10 list of the National Board of Review.

Martin Scorsese does another good job of directing, even if it’s not his best. He works the film very well and presents it well without his usual trademark of over-the-top blood-and-guts. Sure, there were torturous scenes, but they were a far cry from what you’d normally see in Scorsese film. I feel the adaptation he wrote along with scriptwriter Jay Cocks included the right parts and right moments from the novel as none of the scenes seemed pointless. Also he did a good job of maintaining the dignity of the priests and of the Catholic faith. Maybe this is a change in Scorsese.

Andrew Garfield did a very good job in his portrayal of Rodrigues. This was one year where Garfield played roles of people with strong faith. First was Hacksaw Ridge and now this. He did a very good job in presenting a man with a huge spiritual struggle. Adam Driver was given less screen time and it didn’t allow well for his part to develop. He did do well with what he had. Lia Neeson was also good in his part despite how brief and how limited it was. If there was one supporting actor who could steal the film from Garfield, it’s Issey Ogata as Inquisitor Inoue. He came off as cartoonish at the odd time but he succeeded in making you hate him. Other great works in the film include the cinematography from Rodrigo Prieto. He did a lot of good shots in creating the drama and even capturing the beauty of the scenery. Also worth noting is the excellent production design from Dante Ferreti in both the natural and man-made settings and the costuming also by Ferreti which were top notch.

Silence will most likely go down as Scorsese’s most overlooked masterpiece. It was a labor of love of his that didn’t pan out at the box office. Nevertheless, it’s a good think he made this film as it features a lot of cinematic qualities and gives a lot to marvel at.