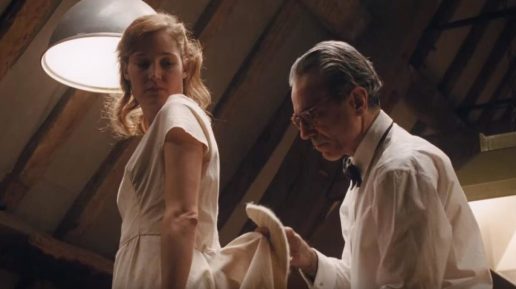 Fashion designer  Reynolds Woodcock (Daniel Day_lewis) is about to be swept away by his ‘assistant’ (played by Vicky Kreips) in Phantom Thread.

This year, there have been some good romances and some not-so-charming romances. Phantom Thread is one of those romances that is quite off the wall, but also one of the most beautiful of the year.

Reynolds Woodcock is a top British fashion designer of the 1950’s. His fashions attract the high society with its charm, originality and impressive design. Reynolds, however, is unmarried in his 50’s. His sister Cyril, who manages his business in a very controlling manner, knows this too well. She knows it may have to do with his pride, but she senses it may be to do about his mother’s death, which he constantly thinks of. Reynolds is also noted for stitching hidden messages into his fashions.

One day, he drives off from his business and goes to a restaurant for breakfast. He meets a charming young waitress named Alma. He asks her out and she accepts. As the relationship grows, Alma moves in, but wants to act as his muse and his assistant as well as be his love interest. Reynolds is mistrustful at first, but he grows to earn her trust.

Alma actually becomes one of his best helps to his business and helping to put on fashion shows. She also works well as a cook, dealing with Reynolds’ hard-to-please picky demands. However, Alma wants more than just to be a cook and assistant. She wants Reynolds’ love. She cooks him a romantic dinner, but Reynolds just lashes out how the meal is prepared and insists he will not put up with any deviations.

Alma is hurt, but knows just the thing to get back her control. Just while Reynolds is getting a wedding dress prepared for the Belgian royal family, she takes some of the poisonous mushrooms, crushes them, and mixes it in with his tea. Soon Reynolds begins to hallucinate the ghost of his mother and collapses over the wedding dress. Alma agrees to take care of him, despite the chance the mushrooms may be revealed. As Reynolds recovers, he is deeply moved by Alma’s devotion and asks her to marry her.

Alma and Reynolds are married. The marriage begins wonderfully, but it soon leads to bickering and fighting. Reynolds even makes it clear he feels Alma is becoming an interference to his business. Not even Alma leaving the place to go to a New Years Eve ball changes his mind. One day, Alma creates an omelet made with the poisonous mushrooms. Reynolds knows they are poisonous. Alma confesses to him she wants him to be weak and vulnerable so she can take care of him, help him recover, and then poison him again. Reynolds accept. She then envisions her future with Reynolds as he’s sick in bed and she’s confessing everything to the doctor.

This is definitely a bizarre romance. It’s about the feelings of love and love-sickness. It’s about a young common woman wanting to win the love of a fashion designer who’s a control freak and a man of immense pride. It’s about the battle of control between the two. Those don’t exactly sound like the elements of a winning romance, but Paul Thomas Anderson makes it work.

He sets it in an atmosphere of high society and high fashion. He creates the appropriate atmosphere for both the romance, the tension and the madness. Despite all that happens, in all the craziness and the differences between the two people, the movie ends with you feeling this love is so right. The two were actually made for each other, even though he’s poisoned and in bed. I think that’s it. I think Anderson wanted to create a romance about love sickness and make it oddly charming and oddly fitting. Sure, she’s going to poison him constantly from then on, but she seems like the right woman for him. She’s definitely the one woman who knows how to take his immense pride away from him. It’s very odd how a woman as sinister as her ends up being his fitting soul mate! The film even gives an appropriate ending where Alma envisions the future of the two together. Perhaps it’s for us the audience to envision our own future of the romance.

Top credits go to writer/director Paul Thomas Anderson. I’ve never thought of a director like Anderson to be able to create a good romance. Here he doesn’t simply create a good romance, but also a story loaded with charm despite its eccentricities. He does a good job of capturing the feelings of romance as well as the feel of tension within the marriage and makes it work on screen. Also excellent is the acting from Daniel Day-Lewis of a fashion designer torn between love and his pride towards his status. Some say this may be Day-Lewis’ acting role as he is talking of retirement. If that holds out to be true, this role will definitely be one of his best portrayals of an original character. Vicky Krieps is very good as the sinister yet charming love interest, but the one actress who upstages Day-Lewis is Lesley Manvile. Playing the sister, she works well both when she’s the observant one who says nothing and when she’s one who has something to say. She does a lot with a part that appears to be very little at first.

For technical credits, top credits go to costume designer Mark Bridges. For a romance about a big-name fashion designer, you need to have dresses that stand out and show why he’s the best in his field, and Bridges delivers! Also excellent is the composed music of Radiohead’s Jonny Greenwood that captures both the dramatic elements and romantic elements of the film.

Phantom Thread does make it look odd for a story like this to work as a romance, but Paul Thomas Anderson made it work. He makes the sinister side of love sickness work.