Hard to believe it’s finally about to start. The very first World Cup game starts at 8:00 on Thursday June 14th in Luzhniki Stadium and it ends there too on Sunday July 15th. And at the end of it all, only one country is left smiling! Anyways on with my last group review: Group H. How do they stack up?

-Poland (10)- Poland has a football success that usually is strong one quadrennial, weak another. This time around, it looks like Poland has its strongest team in decades. They topped their World Cup qualification en route to Russia. They’ve even produced a superstar in Bayern Munich striker Robert Lewandowski.

Poland is not just Lewandowski. There’s also midfielder Jakub Blaszczykowski and defender Lukasz Piszczek. The team features a good mix of young and older talent. They were very impressive in World Cup qualifying. The team has had some notable wins in the past year against Lithuania and South Korea, but they’ve also had 1-0 losses to Nigeria and Mexico. Russia 2018 is yet another chance for Poland to seize the moment.

-Senegal (28)- 2002 seems like a memory. It was Senegal’s first World Cup and they surprised defending champions France in the opening game of that World Cup and en route to going to the quarterfinals. They’ve failed to return to the World Cup scene until now. They hope to show the world they still have what it takes.

After 16 long years, The Lions Of Teranga come back via coach Aliou Cisse who played for that Senegalese team in the World Cup. Most of the players play for teams with the Premier League or France’s Ligue 1 or Ligue 2. Senegal have had some noteworthy wins in the last year such as to South Africa and South Korea. However they’ve also lost recently to Croatia 2-1 and also had a scoreless draw against Bosnia. Senegal returns to the World Cup stage here in Russia with lots to prove.

-Colombia (16)- This appears to be a new era in Colombian football. They first had a chance in the 90’s to make a name for themselves at the World Cup, but poor performances marred by political strife in their country prevented that from happening. Then they made a return to the World Cup scene in 2014. There they made it to the quarterfinals for the first time ever. On top of that, striker James Rodriguez won the Golden Boot for scoring six goals.

Rodriguez is back, along with midfielder Carlos Sanchez, striker Radamel Falcao and Arsenal goalkeeper David Ospina. Colombia has had some recent noteworthy wins such as 3-2 against France and 4-0 against China. However they’ve also lost 2-1 against Paraguay and 2-1 against South Korea. Chances are Colombia can go further than they ever have here in Russia 2018.

-Japan (60)- Japan is one Asian country that has been struggling to show how talented their team is. The Samurai Blue have made it to the Round of 16 in 2002 (which they co-hosted) and 2010, but that’s as far as they’ve ever gotten. Japan has produced a boom in football back with the boost of the J-League in the 90’s but they’re still waiting for their big moment. Sure, they’ve won many AFC Asian Cups in the past, but they feel they have more to prove internationally.

This past year has had its ups and downs for Japan. They recently won against Paraguay 4-2 and won against Australia 2-0. However they’ve had some notable losses to Brazil 3-1, Switzerland 2-0 and Belgium 1-0. Remember anything can happen in World Cup play and Japan could just surprise everybody during Russia 2018.

So that’s my summary of the Group H teams. As for the two I feel will advance, I will have to go with Poland and Colombia.

Situated on Krestovsky Island in St. Petersburg, this stadium is not just known for its design, but its enormous cost to construct: an estimated $1.1 billion! It is considered one of the most expensive stadiums ever built. The high cost had a lot to do with a delayed civic loan, wind damage and flooding to materials and a withdrawal of a major corporate funder. Its opening in 2017 is nine years later than expected. The design of the stadium is based on Japanese designer Kisho Kurokawa’s ‘ Spaceship’ design. The stadium is situated where the old Kirov Stadium used to be. After the World Cup, the stadium will be the host venue for FC Zenit St. Petersburg. 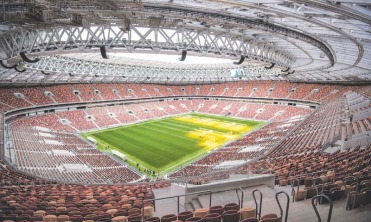 This stadium has an immense amount of history with it. Actually during the days of the USSR, it used to be known as Central Lenin Stadium. After the collapse of the USSR and the doing away of Communism, the stadium has been named after the Luzhniki district it’s situated in. During the days of the USSR, the stadium was the centrepoint of the national Spartakiad sports celebrations. It was also the host venue for the 1980 Summer Olympics, 1973 Summer Universiade and 1986 Goodwill Games. Since the fall of Communism and the emergence of the Russian Federation, the stadium has hosted the 1999 UEFA Cup Final, 2008 UEFA Champions League Final and the 2013 World Championships In Athletics.

The stadium has had three renovations in the past. The most recent being before the Confederations Cup in preparation for the World Cup. World Cup renovations include a demolishing of the old stadium to have a new stadium with enclosure. The self-supported wall and facade of Lenin Stadium was maintained. New construction allowed the stadium to be connected to a main building. After the World Cup, the stadium will be the host venue for the Russian national team.

And that does it! This is the last of my group previews for the 2018 FIFA World Cup. Hard to believe the opening ceremonies are 24 hours away, give or take. One thing for sure is that it will deliver a full month of excitement and surprises.