2019 FIFA WWC: My Prediction for the FINAL, And Third-Place Playoff Too

I have to say this Women’s World Cup has been excellent. It won’t break the attendance record set by Canada back in 2015 but it has already surpassed the 1 million mark. The support for the teams has been outstanding with the various football federations shouting their support and some of the biggest male football stars supporting their teammates. Play has also been excellent as there’s American Alex Morgan and England’s Ellen White chasing the golden boot with six goals each. Also there’s only been four expulsions: only one of which was an instant red. So this is a Women’s World Cup France should be very proud of.

Few people are willing to make a prediction for the Third-Place playoff, or the match I call the ‘bronze medal match.’ However I’m one who is willing. Here’s how I look at it:

England: Women’s football has really grown a lot since England finished third at the last Women’s World Cup. The team they fielded looked like one that could pose the best challenge to the United States. Unfortunately it was not to be as the US beat them 2-1. To add insult to the injury, the US’s Alex Morgan appeared to do a tea-sipping gesture after scoring the winning goal. Many have taken this to be an insult to the English.

It’s difficult to say if England will win. They will have a lot of their top stars like Ellen white and Lucy Bronze ready to play for the game, but Millie Bright won’t be after her double-yellow red card. Phil Neville knows that he will have to get his team ready for the match on Saturday. England have already gotten this far. Perhaps they can give their team one last feat.

Sweden: Before the semifinal, I’m sure most of you predicted Sweden to beat the Netherlands. I mean Sweden had the clout. They’ve been to every Women’s World Cup since it began in 1991. They’ve finished in the Top 3 three times before. They’ve even beat the Netherlands way more often than they lost to them. However things did not go according to plan. Before the match, Fridolina Rolfö received a second yellow card during the match against Germany which meant she will miss the next match. The Netherlands turned out to be a more formidable opponent than they expected. Regulation play resulted in no score. Then there was the goal from Jackie Groenen in the 99th minute. Then there was the shocking injury to Kosovare Asllani where she was carried off on a stretcher.

Sweden came to the tournament with a lot of energy. They won big and were able to rebound after a loss to the United States. Their trip to the WWC semifinal was not easy as they overcame teams like Canada and Germany that had bigger expectations. However they were brought to a halt by the Netherlands in the semifinals. They could win the third-place match or they could lose it. It depends if their players are all in top condition and they attack more than they did on Wednesday.

My Prediction: England have the star strikers, while Sweden has a strong team unit. Sweden will have a one-woman advantage in this game after Bright’s expulsion. Asllani may not be recovered from her injury, but Rolfö can be brought back in play. I will predict Sweden to win 2-0. 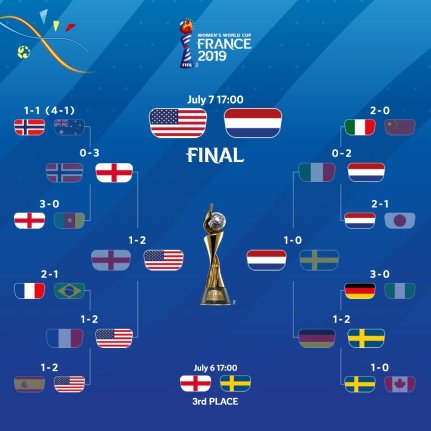 This is it. The final for the Women’s World Cup. One team has been their four of the previous seven times and won three times including the last contest in Canada. The other team is only competing in its second Women’s World Cup and won its first-ever knockout match right here in France. So this is quite the quantum leap for the team. So here’s the low-down:

The USA and the Netherlands have met only seven times before. The only time the Netherlands won before was their first meeting all the way back in 1991. The last time the two squared off against each other was in 2016.

United States: The United States is the team that is most expected to win this Women’s World Cup. They’re the defending champs from 2015. They’re ranked #1 in the World. They have some of the biggest stars in women’s football who are seen as trailblazers. However they have also earned naysayers too. It all started when they won 13-0 against Thailand and celebrated after each goal. Many thought it was disrespectful. Then Megan Rapinoe made headlines for taking a knee during the play of the Star-Spangled Banner. She followed that by saying she won’t be going to the White House to a reporter. Most recently, Alex Morgan made England fans mad when she celebrated her game-winning goal by doing a tea-sipping gesture. Despite the negative press, they’ve delivered each time. They’ve won all their games, scoring 24 goals and only conceding three.

The only barrier I can see the US would have en route to winning the Cup is them being overconfident. They’ve played very well: better than any other nation. However they showed in their Round Of 16 game against Spain they could give it all away. They won 2-1, but on two penalty kicks from Rapinoe. They did come back in the QuarterFinals against France winning 2-1. However they should not go to the Final thinking they’ll roll over the Netherlands. The Netherlands has surprised all their major opponents here in France. For the US to win, they have to be on the ball and take the Netherlands seriously.

Netherlands: Before Women’s Euro 2017, people did not expect much of the Netherlands. Why should they after they finished in the Round of 16 in Canada 2015 and failed to qualify for the Olympics? However they surprised everybody by winning all their games and would win the final by beating Denmark 4-2. This made it the first Women’s Euro since 1993 that Germany didn’t win! Here at this Women’s World Cup, expectations were good but not that big. Canada was expected to top Group E, but the Netherlands did it by winning all their games, including beating Canada 2-1. Then in the Round of 16, they were pitted against Japan whom they lost to in Canada 2015. This time the Netherlands won. They were pitted against Italy in the quarterfinals and won 2-0. Then came Sweden who was more expected to win the game. It started with nil-nil after regulation, but a goal from Jackie Groenen in the 99th changed it all. Now it’s the Netherlands in the final.

What can I say? The Netherlands have silenced their critics. Especially those who dismissed their win at the Women’s Euro as host-country luck. These past six matches show that the Netherlands have earned their place in the WWC Final. However the United States team has more seasoned players and have consistently shown to be a stronger team unit with more know-how of the game than the Dutch players. Now don’t get me wrong. I think the Netherlands can win against the USA, but they will have to play like they’ve never played before, both as individuals and as a team unit, and take advantage of any American weak-spots once they find them.

I hate to side with the majority so instantaneously, but I think the United States will win this 4-1. I hate to peeve off Oranje fans, I could be wrong, but the Netherlands simply making it to the final already shows how much women’s football has improved there.