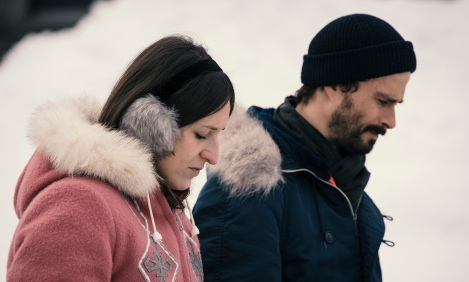 A Brother’s Love is a comedy about a brother-sister relationship in danger right after the brother meets the love of his life.

I know it’s my goal every VIFF to see one Canadian feature film. That was achieved during the opening gala with Guest Of Honour. The second chance I had was with the Quebecois film A Brother’s Love. This was a film that presented a bizarrely intriguing story.

The film begins with a college looking for a new professor for their philosophy department. They think they find it in Sophie: a recent PhD graduate. Sophie lives with her brother Karim in the same apartment. She appears to be co-dependent on him. She struggles going from job to job, but he is doing very well as a psychologist. They appear to be the thinking-people’s type. Then they have dinner at their mother’s place. Their parents are divorced, but not estranged. The parents appear to be the more free-wheeling type compared to the children. Karim enjoys seeing them dance, but it appears like something is eating at Sophie’s head.

One day, Sophie goes to her doctor with Karim escorting her. She seeks an abortion. This is her second one and Sophie has no intention of having children. Sophie goes about her professor job soon after, but is constantly late. She is soon fired. Soon Sophie learns that Karim is dating her doctor Eloise. Sophie is shocked about this and doesn’t know how to take it. Sophie feels she has to lose her frustrations while watching an episode of the Kardashians or the latest in trash TV.

While Sophie still struggles with getting a new job, Eloise introduces Sophie to a man: a male midwife named Jasmin. The meeting between the two of them go well and there’s the potential of meeting up again soon. Karim, Sophie and Eloise then have dinner with the parents. During the dinner, they talk about their future plans together including marrying and having a family. Soon Sophie has an outburst at the dinner table and takes it out on everyone. Eloise and Karim especially.

Sophie needs time alone from them. She finds it in a date with Jasmin. She finds Jasmin to be a man she can finally feel comfortable around and have conversation with, even her most philosophical. She later apologizes to Karim and learns that the closeness between the two is still there despite both going different directions.

The film doesn’t just focus on the complications of relationships, whether they be about intimate relationships or even family relationships, but also of the personal traits and personal mindsets that create such friction. Sophie has a doctorate in philosophy and possibly because of it, she overthinks a lot. That’s evident when she tells her new boyfriend her thought on monogamy. She always speaks her beliefs about her issues and about life. Sometimes it appears like she creates her own troubles of the mind or she doesn’t know what to think. Most of her insecurities seem unnecessary. Everyone else appears like they’re mostly well-balanced or carefree. She does try to adopt the common carefree attitudes of others at times, but it’s a personal struggle. The struggle reaches boiling point at the dinner table when she takes out her frustrations on Karim and Eloise. However it’s Jasmin who’s the one who can truly teach her to calm down and learn to live life well.

It’s a bizarre story. We have a philosopher sister and a psychologist brother. The brother’s there for her during her troubling times and even gives her a place to stay. The brother falls in love with her doctor which leaves Sophie feeling she’ll be lost. On top of that her temperament and philosopher mind-set causes friction with those around her. Basically Sophie is a confused person. The brother/sister relationship between her and Karim appears to be more than a relationship. She appears to have a reliance on him as she fears she can’t make it out in the outside world. Once Karim dates Eloise, she fears she might lose him. The story is very much a psychological comedy as it does involve a lot with human behavior and people’s thinking patterns.

This is the first feature-length film written and directed by Monia Chokri. She has had a good career as an actress in Quebec and has acted in two films by Xavier Dolan: Heartbeats and Laurence Anyways. It’s an impressive debut. It’s imperfect, but it does tell a lot and show a lot. One would have to know these personality types in order to fully understand them. Knowing that Xavier Dolan has delivered stories of people with crazy mindsets, it’s tempting to think he may have had some inflence on the film. He is actually not credited with anything here. Anne-Elisabeth Bosse, who also acted in Heartbeats, is great as the main protagonist. The film is all about Sophie’s personality. The personality has to be all there for the story to work and make sense, and Sophie delivers. Patrick Hivon is also good as Karim as well as Evelyne Brochu as Eloise. Coincidentally, Brochu acted in the Dolan film Tom At The Farm.

A Brother’s Love has had its acclaim. It won at the Cannes Film festival the award of Un Certain Regard – Jury Coup de Coeur. It was also a nominee at the Hamburg Film Festival for the Best Young Talent award.

A Brother’s Love can’t be described in a single work. It has a lot of intellectual moments, it had intimate moments and it had moments of insanity. Nevertheless the film comes together at the end and makes better sense after you’ve left the theatre.