Posted on 1 May 2011 by Jon The Blogcentric One comment 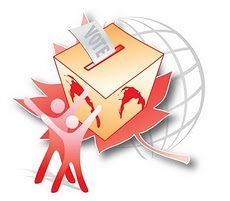 Okay, some of you who don’t live in Canada have heard that we have a National Election—the 41st Canadian General Election– in which we will be voting on May 2nd, but don’t know all the details of what’s going on. Here are the details about what’s been happening and what to anticipate.

For those unfamiliar with how Canadian elections work compared to American elections, Canadian elections are held on any given date instead of the first Tuesday of November. A Prime Minister’s term can be any length of time instead of the solid four years of an American President’s term, even though most Prime Minister terms are between three to five years. While Presidential Elections are decided by electoral votes based on which Party wins the most votes per state, Canadian Prime Ministers are decided by the most won seats with each voting district or region deciding its own winning Member of Parliament per Seat. In other words, while citizens vote for electors in the Presidential election and the winning Party in the state wins all the state’s electors, Canadians vote for MP seats in the Prime Minister election. While an American President is decided by the most electoral votes, even if he doesn’t have the highest total of votes, A Canadian Prime Minister can be declared upon winning the most seats even if they don’t have the highest total of votes. So there are some similarities between Canadian elections and American elections but a lot of differences.

Now for the current political scenario in Canada. Politics in Canada has gone through a lot of chaos over the past few years; so chaotic this is the FOURTH National Election in seven years. The most recent National Election was declared in the aftermath of a political scandal. Stephen Harper’s Conservative party was long considered to be in contempt of parliament at the beginning of March upon refusing to meet Opposition requests for details of proposed bills and their cost estimates. The Liberal Party responded by declaring a motion of non-confidence against the Government and on March 25, 2011, the House voted agreeing 156-145 to the motion. This marked the first time in the history of Canada or any nation in the Commonwealth of Nations that a cabinet has been found in contempt of Parliament. Following a meeting with Stephen Harper, Governor-General David Johnston agrees to dissolve the 40th Canadian Parliament and a Federal Election was declared.

Even before the most recent election was declared, Canadian politics has already been known for its chaos in the last seven years. Back in 2005, the Liberal Party under then-Prime Minister Paul Martin faced a sponsorship scandal of what would be documented in the Gomery Report. Even though Paul Martin had been Prime Minister for less than a year, an election was declared and in January 2006 Conservative Party Leader Stephen Harper won the election with a minority of seats. The Conservative Party victory was considered an arrival for political conservatives in Canada who struggled during the 90’s after the eventual decline of the Progressive Conservative party upon the resignation of Brian Mulroney.

Another national election was held less than three years later in October 2008 and Harper’s Conservatives again won the election with a minority with Liberals, Bloc Quebecois and NDP making up most of the remaining seats. Shortly after the 2008 Federal Election, the Liberals and NDPs banded together for an overthrow of the Conservative government through a unified vote of non-confidence. Some may call it the right thing, others political mutiny. Whatever the situation, the coalition didn’t succeed and the Harper-led Conservatives remained the leading party of Canada. Since then, many Liberals have tried to distance themselves from the coalition.

Now it’s Stephen Harper’s try for a third term as Prime Minister. He comes in the election with the scandal creating baggage for him, but not a lot. Before the scandal, the Conservatives were tops in the polls and they still remain on top. One thing Stephen Harper is hoping for is a Conservative majority, especially with the 2008 attempted coalition still in his Party’s memory. The most surprising fact of the polls is that the Liberal Party is not the party with the second-highest ratings but the NDP. The Jack Layton-led NDP surpassed the Liberals in the April 20th poll and the most recent polls have the NDPs at an average of 31.4% in comparison with 3% for the Conservatives and the Liberals at 20%. This has many believing that the NDP could be setting up for a possible upset for Monday’s election; maybe even a Prime Minister Layton. Mind you the polls only represent popular voting patterns. It will all be decided when the ridings vote for the MP’s and their parties.

Win or lose, Jack Layton appears poised to have the biggest National Election result for the NDP party ever. The biggest ever result for the NDP Party is 43 seats in the 1988 election while the Party was led by Ed Broadbent. Even its founder, Tommy Douglas, never experienced the success Ed received. One difficulty of Layton’s, especially after the coalition, is for the NDP to distinguish its political platform from that of the Liberal Party. Too many voters label the NDP to be like the Liberals since they are on the same left stance. This may be seen good for liberal-siding voters but not so good for the NDP’s own identity. Whether Jack Layton wins or loses, he will have to prove the NDP’s distinction from the Liberals politically. Otherwise voters will continue to believe the NDP and Liberals are two choices of the same stance.

Then there’s the Bloc Quebecois. The Bloc was started in response to a resurgence of Quebec nationalism felt after the decline of the Parti Quebecois and after the Meech Lake Accord, which was intended to grant Quebec distinct constitutional status, was overturned in 1990. The party has attracted Quebec nationalists and even prompted a second referendum in 1995 in which Quebec nationalism lost again. Despite Quebec nationalism being voted down, the party has always won at least 50% of the Seats open to Quebec. The Bloc had 49 Seats in the last election–47 are still current– with 10% of the popular vote in Canada and 38.1% of the vote in Quebec. However recent polls have them at 7%. Could this mark a decline of the Bloc?

Party aspects aside, One thing about the election is that the parties are hoping for a better voter turnout than what happened during the 2008 election. Then, the voter turnout was 58.8%, the lowest turnout percentage ever for a National Election. Parties have been making the effort to urge voters out. Even campuses have had young people out to drum out support. Interesting how around the time I first became an adult, MTV started a ‘Rock The Vote’ campaign around the time of the 1992 Presidential election and MuchMusic started ‘Vote With A Vengeance’ for the 1993 Federal Election. This election, there’s no ‘Vote With A Vengeance’ campaign. Funny. Doesn’t Much care anymore?

The big day is May 2nd, tomorrow to be exact. Canadian history will be decided by the people. The election results and its aftermath will further shape Canadian democracy in the years to come. Stay tuned. As for Canadians, get out and vote!