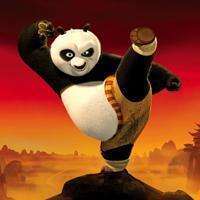 Yes, I’m playing catch-up with my movie reviews of the summer. Hope you like this late review.

I’m sure you remember the first Kung Fu Panda. Po was the lumpy clumsy Panda who came from nowhere to become the Dragon Warrior. It charmed audiences, made people laugh and even rivaled Disney/Pixar in making 3D animated movies. Now Po’s back in Kung Fu Panda 2. But does this new version of Kung Fu Panda still have its kick?

We begin the movie learning of the clash between the peacock clan and their son Lord Shen stealing the power of the fireworks and using them as weapons. When Shen learned from a soothsayer that a warrior in black and white would defeat him, Shen exiled the pandas from the village. Shen’s parents exiled him soon after to which Shen swore revenge.

Flash forward 20 years, we see Po as the Dragon Warrior protecting the Valley Of Peace with the Furious Five who are now his friends and allies. Master Shifu senses Po lacks inner peace. At first Po doesn’t know what he meant until the five attack a band of wolf bandits. During the fight, Po is distracted by a symbol on the head wolf’s armor which causes a flashback to memories of his birthmother. He then learns from his father, the goose Mr. Ping, that he found him as a baby in a radish basket and adopted him since. Learning that truth leaves Po frustrated and upset.

Later Master Shifu learns that Master Thundering Rhino has been killed by Lord Shen with a cannon he build and plans to use to destroy kung fu tradition and conquer China. Po and the five go to Gongmen City to end Shen’s control. They come across two imprisoned council members and try to chase down Shen’s wofl pack, only to be captured. Upon being brought before Shen, Po and the Five break free and destroy Shen’s cannon. However Po is again distracted by the symbol that caused flashbacks of his mother which allows Shen to escape and destroy the tower with an arsenal of cannons. After escaping, a concerned Tigress confronts Po of his distraction. Po knows of Shen’s presence on the day he was separated from his parents and has to ask him about his past

Despite Tigress fearing for him, Po breaks into Shen’s cannon factory and confronts him. Shen tells Po his parents abandoned him before blasting him out of the factory and capturing the Five. Po finds himself rescued by an exiled Soothsayer in the city he was born in. The Soothsayer guides him to embrace his past where Po learns his village was raided at the time he was born as Shen’s forces killed every panda and burned the village. Po’s father was fighting the war and told Po’s mother to run and escape with their baby. Po’s mother ran throughout the snow and left him in a radish box at a place she knew he’d be safe, Mr. Ping’s place. It’s upon returning to his old home and finding his childhood toy that he learns he was given up out of love and raised out of love. Finally he attains inner peace.

Po then returns to Gongmen City to save the Five and stop Shen from conquering China. Po and the Five along with Ox and Croc block the gates to shop Shen but Shen’s cannon clears the way and lands them all in the ocean. While Shen attacks Po with his cannon, Po is able to use his inner peace to redirect Shen’s cannon fires to Shen’s cannon, destroying it. He then urges Shen to let go of his past, but Shen refuses and attacks Po. In the fight, Shen accidentally cuts the ropes to his own cannon and is crushed to death. Po achieves victory and freedom for Gongmen City. He returns to Mr. Ping and lovingly declares him as his father. The very end may hint to many that there may be a Kung Fu Panda 3.

While I’m not a big fan of most Holywood sequels, I have to say that I was impressed with Kung Fu Panda 2. It managed to have a story different from the first movie. Its fights and special effects were just as dazzling as the first. The characters still had their charm from the original and especially kept the appeal of Po. The movie had an excellent range of voice-over talent with renowned actors like Jack Black, Angelina Jolie, Dustin Hoffman, Jackie Chan, Michelle Yeoh and many others. The animation graphics were excellent and top notch to the slightest detail.

For the most part, I believe the movie would be fine for parents of children but not for most adults. It is a movie that doesn’t have the same level of adult appeal as a Disney/Pixar animated movie would. Some things that may appeal to parents is the actors doing the voiceovers. Overall, the movie, storyline and humor are more tailor made for families of young children.

Overall Kung Fu Panda 2 makes for an enjoyable night out at the movies for families of young children. Even some older children or teenage fans of the first movie will enjoy it.