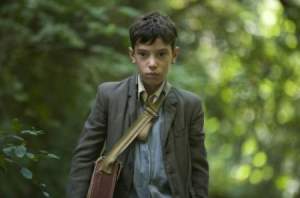 On Friday October 14th, the Vancouver International Film Festival came to a close. The film shown at the Closing Gala in the Visa Screening Room at the Vogue Theatre, where all the festival’s awards were given out, was the French-language film The Kid With A Bike. The very last film to start running at the film fest was the 9:45 showing of The Kid With A Bike again at the Visa Screening Room.

However the last film to finish at the festival was the Catalan-language Spanish film Black Bread (Pa Negre). It was actually at the former location of the Visa Screening Room; Theatre 7 at the Granville 7. Fortunately for me, I had a ticket for Black Bread. I have to say I’m very glad I had a chance to see it. It’s an intriguing story of innocence lost and of the scarring of hard truths.

The film starts with a murder taking place. A man and his son are killed as their coach falls off a cliff led by their horse who had been slapped by a rock. The film’s protagonist, young Andreu, discovers the wreckage and sees the wounded boy utter his last words: “Pitorliua.”

We soon learn that the victims were Dionis, a bird dealer, and his son. Dionis was a bird dealer who raised and dealt birds with Farriol, Andreu’s father. Farriol is suspected of the murders by the town major. He’s an easy target for his Marxist beliefs and supported the Second Spanish Republic whom Generalissimo Franco opposed, and because he rivaled the major for the love of Florencia who’d eventually marry Farriol. Things take a turn in the family as Farriol flees across the border into France, Florencia starts working in a fabrics factory in another town and Andreu is sent to live with paternal relatives. The house he lives in consists of his grandmother, a widowed aunt who has a son slightly older than Andreu, an unmarried aunt who’s pressured into marrying a man she doesn’t love and Nuria, an orphaned cousin of his who lost her hand while playing with a grenade. He and Nuria would develop a friendship and it’s his time with Nuria that would most change his life forever.

Now Andreu is a smart boy with a very promising future but the surroundings he lives in are unpromising. His father is on the run, his mother works in a factory, the village teacher is an alcoholic who teaches the wrong things, and the relatives he lives with work as servants to the wealthy Manuben family. Soon over time, the first dark secrets about Andreu’s family would be exposed. His unmarried aunt is having a secret affair with a civil guard. Nuria is engaging in sexual games with the teacher. Meanwhile he also meets a teenage boy naked in the woods: a sickly boy living in a monastery who believes he has angel wings. Andreu befriends him and even sets food aside for him daily.

Soon Andreu accidentally learns his father was hiding inside his relative’s attic raising birds, instead of fleeing to France. The major eventually searches the house, finds Farriol, and imprisons him. Farriol tells Andreu to convince his mother to ask the Mrs. Manubens for help. Mrs. Manubens, childless herself, is impressed with Andreu and writes a letter to the major interceding for Farriol. When Florencia tries to deliver it, the major makes a sexual advance to her.

Soon a secret about his mother would be exposed with the unraveling of the truth about Pitorliua. Since the coach crash, Andreu had been told by villagers that Pitorliua was a ghost that believed to live in a cave. However there was a person many years ago who would be given the name Pitorliua after death. He was a delicate young man whom his mother befriended in her youth. When Andreu and Nuria go to Pitorliua’s tomb, they encounter Pauletta, the half-demented widow of Dionis. Pauletta exposes that the man known as Pitorliua was Mrs. Manubens’ only brother and a homosexual who was castrated in ‘punishment’ for his orientation. The two children discover the cave where Pitorliua was castrated and discover the names of the culprits on the wall: Farriol and Dionis. As Andreu confronts his mother, Florencia reveals that they were paid by Mrs. Manubens to scare Pitorliua off but things went too far.

Farriol is sentenced to death. Florencia and Andreu visit him the day before he is executed. Andreu shows him the bird he raised. Farriol tells Andreu to never forget his ideals and to go with his heart. After the execution and burial, Pauletta reveals to Florencia with Andreu listening that it was Farriol killed Dionis and her son. Farriol was instructed by Mrs. Manubens to get revenge on Dionis for blackmailing her. In return, Mrs. Manubens bought Farriol’s silence in exchange for Andreu to get an excellent education. Angry at all the lies he had heard of his family, this was the last straw for Andreu. He immediately rejects his family and even goes as far as trying to kill all his father’s birds. After, he and Nuria bury dead birds and Nuria’s severed hand in a box. They first plan to run away together but Andreu accepts the education offered at the expenses of Mrs. Manubens. Even as Florencia visits Andreu at the school, Andreu still hasn’t forgiven his parents.

The major theme of the film has a lot to do with children’s innocence being exposed to the dark secrets of their family and learning the truth about the lies adults tell. Andreu is a carefree child at the beginning of the film but the coach crash would signal the beginning of the end. It is upon meeting Nuria, already insane from the grenade explosion and her ‘encounters’ with her teacher, that Andreu would be lead into ultimately unleashing his inner monster. Even though Andreu is innocent enough to reject Nuria’s sexual advance at first, Nuria would lead Andreu along that path as she would lead him to the cave where Farriol killed Pitorliua. As each additional lie and dirty secret about his family and village is exposed to him, his innocence withers away. It is when Pauletta reveals the truth about Farriol and the coach crash that it’s finally all over and Andreu explodes in rage. In the end, Andreu’s heart is so hardened, he still can bring himself to forgive his parents or even associate in any which way with his mother. I believe the death of the children’s innocence is best symbolized with the burial of the box with the dead birds and Nuria’s severed hand. In retrospect, it seems as though the children, even the crazy and deluded ones like Nuria and the teenage boy, are more trustworthy than the adults.

The motif of birds is key in this film as it is birds or bird-like people that are linked to the unraveling of events. It is the last words of Dionis’ son ‘Pitorliua’ that would start the unraveling of truths to Andreu about his father and village. It is the father’s raising of birds that connects Andreu with his father in both Farriol’s life and death. It is the real Pitorliua who is the exposure of truth behind the myth claimed by the village and the truth of Farriol exposed to Andreu. It is how the crash where the boy uttered Pitorliua where the hardest truth about Farriol would be exposed to Andreu some time later. It is Andreu’s killing of his father’s birds that would symbolize his severing of ties with his family and his inner monster breaking out. Even the statement Nuria gives him; “That would be your portrait: portrait of a bird killer” would symbolize the dead innocence in Andreu. It is the teenage boy that resembles the spirit of Pitorliua that Andreu would be the one connection to Andreu and his innocence. It is when Andreu hugs the boy goodbye that symbolizes the end of Andreu’s innocence.

What adds to the film’s story is the political situation in the time set. This is the 1940’s. Catalonia lost to Generalissimo Francisco Franco’s Spain in the Civil War in the 1930’s and is under its tight rule. The Catalan language and culture is repressed under criminal punishment and Marxism is also grounds for arrest too. The rich Manubens not being punished for their role in the planned killing of Dionis and his son, and even paying people to carry out duties they wanted, can also be seen as something political too. I strongly believe director Augusti Villaronga is making a statement about the politics of the past. What made me nervous in the film was hearing the teacher teach the children “History is written by winners.” That made me nervous because Catalonia was on the losing side of the Spanish Civil War. I also feel Villaronga is making an additional statement as Farriol appears to be a Marxist to the end but is later revealed to be a murderer and one willing to commit acts of atrocity for a rich family in exchange for either payment or other favors.

The overall acting of the actors was excellent. Nora Navas and Roger Casamajor are excellent as the parents. Young actors Marina Comas and Francesc Colomer are also excellent and very believable in what is their acting debuts. Supportive roles from Marina Gatell and Laia Marull were also excellent. Augusti Villaronga did an excellent job in directing and adapting the novel to screen.

Black Bread already has a lot of buzz surrounding it. It was a big hit at the San Sebastian Film Festival. It won nine Goya Awards, Spain’s national film awards. Then the day before the VIFF began, news was made that it beat out Pedro Almodovar’s The Skin I Live In as Spain’s official entry in the Best Foreign Language Film category for this year’s Academy Awards. It’s especially ironic since The Skin I Live In was the film shown at the VIFF’s Opening Gala. Black Bread is one of seventeen films at the VIFF that are its respective country’s official entry into that category. It was the first time a film shot primarily in Catalan–the predominant language the northeastern region of Catalonia– was entered into that category As Spain’s official entry.

Black Bread was a great film to end my year at the Vancouver International Film Festival. It’s haunting story of innocence lost stays with you and leaves you thinking. The world does seem less truthful and less noble. The past seems more brutal and more chaotic than the images of peace and harmony that we often associate it with. A definite eye opener.