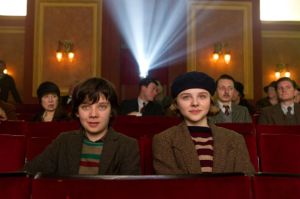 Hugo is a delightful movie based on the book The Invention of Hugo Cabret by Brian Selznick. It’s a unique story about how a chance stealing by a young boy changed everything forever.

It all starts in a train station in Paris in 1930. Hugo Cabret has a life no child would want. He lives in the train station completely orphaned and with nothing but a bed and an automaton from his late father whom he hopes to repair. He ended up there after his widowed father was killed in a fire and taken by his alcoholic uncle who would look after the station clock. After his uncle died, Hugo steals food and runs the clock himself from revealing the death of his uncle. If the truth is found out, he will be sent to an orphanage.

Soon Hugo catches the attention of Isabelle, the girl who frequently visits the train station. She is an orphan too who is being looked after by the toy store owner, whom she refers to as Papa Jacques. He notices the key she wears: it is heart-shaped. His automaton has a heart-shaped lock. Another link to the mystery. The two spend time together. She sees the clock area Hugo lives and the view of Paris. The two sneak into a movie theatre and see a movie, something Papa Jacques forbids her to see. Later Hugo uses Isabelle’s heart-shaped key on the automaton. The automaton draws a picture of the moon with a spaceship in his eye and the name Jacques Melies.

The two try and search further to see if Papa Jacques really is Jacques Melies. Upon a return visit to the house, they try to uncover the top drawer in his bedroom. Out comes a wide variety of imaginative artist images. Nevertheless Jacques is distraught to learn the children have learned of his secret. It’s only until the children bring a young film student to Jacques that Jacques finally reveals that he really is Jacques Melies, director extraordinaire of the early 20th Century. He explains to all why he became a recluse, because of his films failing as the First World War was taking place. He even burned most of the master copies of his films in a fit of rage during his downtime.  It is through Hugo and the film student that he’s able to receive an acclaim from a new generation of film enthusiasts. It is also where Hugo finally finds a family.

The movie is more than just a salute to Jacques Melies and his contribution to film in general. This movie is also a salute to moviemaking and movie watching. Movies achieved their greatness by making people’s fantasies come to life. They took them to worlds never before imagined. They took them to adventures and thrills they wouldn’t experience in their own lives. And to think it all started when a film of a train approaching the station made the audience duck for their lives. Nowadays movies face a lot of rivalry from many entertainment sources. Its biggest rival is now video games which allow the viewer to live the fantasy via an avatar, but movies still capture people’s attention and take them to worlds they never dreamed of.

Even though the movie is very much a salute to movies, it’s also a reminder that even then, great directors like Melies faced downtimes too. Jacques created hundreds of movies in his lifetime but as soon as most of the French public lost their liking for movies his fortune disappeared, his studio became useless, burned his films in anger and lived in obscurity for years. Nowadays we hear countless stories of people, especially greats, who had their moment but fade fast and die in obscurity without a penny. It happens to greats as often as it happens to ‘one-hit wonders’. Showbiz is cruel. Fortunately there does come a time long after their downfall when their achievements are recognized once again. It may be while they’re still alive or it may be post mortem but their greatness does become remembered and honored again.

Overall the movie was top-notch quality. That’s something you rarely see in most live-action family movies. There was no one acting performance that stood out or was spectacular but the performances of all worked excellently with the movie. Ben Kingsley was very good as Jacques. Sacha Baron Cohen who’s known for his comedic characters was great as the comic relief of the movie. The child actors of Asa Butterfield and Chloe Moretz did an excellent job in their lead roles. The story was very well-adapted and well-edited as it’s able to keep the audience excited, thrilled and interested from start to finish. Martin Scorsese did another excellent directing job. He’s tackled a lot of genres of film excellently and now he achieves another triumph in directing family movies. The score by Howard Shore fit the movie perfectly. The visual effects were also amongst the best of the year. The movie being shown in 3D worked. This was one of the rare times in which the 3D viewing appeared to be less in vain or for extra money and more for the delight of the crowd. It looked like Scorsese knew that if he was to have a movie in 3D, he should have the effects that make it work.

One thing that’s been unique in the film world of recent years is that a lot of well-renowned directors have started to make family movies. Seven years ago, Danny Boyle (Trainspotting, 28 Days Later, Slumdog Millionaire) released Millions: a story about a boy who encounters a bag of stolen money and consults patron saints for advice. Many years ago, Roman Polanski did his version of Oliver Twist to make a movie for his children who were twelve and under at the time. Two years ago, Spike Jonze directed the film adaptation of Where The Wild Things Are. Even Quentin Tarantino says he’s interested in doing a family film if the right idea comes around.

Now we have Martin Scorsese with a family movie out. It may come as a surprise since he has been renowned for his filmmaking of some of the grittiest legendary dramas. Nevertheless if Martin was to make a family movie, Hugo would be the perfect fit. The celebration of film in Hugo is something Martin would do well because Martin is known to have a love for film itself. Martin even did a documentary series for the BBC years ago where he narrated the history of film and its genres. In Hugo we see Martin’s love for film as much as we see the reasons why movies have become so beloved. Even Roger Ebert described the move as “in some ways, a mirror of his own life.” And the love of film started with Jacques Melies. Martin Scorsese does more than just make a family movie. He also makes a masterpiece that even adults can appreciate, especially those who love film. The film has been nominated for Best Picture and ten other categories at this year’s Oscars. It is the first live-action family movie since Babe to be nominated for Best Picture.