Movie Review – The Adventures of Tintin: The Secret Of The Unicorn 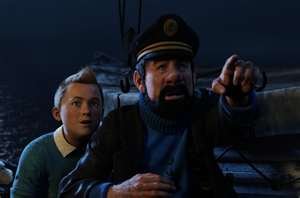 When you think of cartoon characters that have become pop culture icons, who comes to mind? Garfield? Snoopy? Calvin? How about Tintin: the freelance reporter with the funny hairstyle that was all the rage more than ten years ago who travels the world with his dog Snowy? You can bet he’s a pop culture icon in Europe, especially the French speaking countries. In fact his 75th anniversary was celebrated in 2004 with a special 10 Euro commemorative coin.

Tintin cartoons have been known the world over but has had only two live-action movies made of him made way back in the 60’s. Tintin comes to the big screen as a full-length animation feature in The Adventures of Tintin: The Secret of the Unicorn.

Tintin is out in an open air market and purchases a model of the ship the Unicorn. A villain named Sakharine wants to buy it off Tintin but he refuses. The ship is broken on the day Tintin buys it as Snowy runs around the house chasing a cat. The break also knocks out a small scroll inside a metal flask. Meanwhile incompetent detectives Thomson and Thompson are searching for a pickpocket in the city. Also we’d learn how skilled of a villain Sakharine is: with associated accomplices and eagles trained to fly on command and steal.

Tintin would later visit Sakharine where he would learn there are two model ships. Soon Tintin is kidnapped by accomplices of Sakharine and imprisoned on the SS Karaboudjan. He meet the Captain Haddock who has been made drunk by a first mate under Sakharine’s control and doesn’t know what’s happening on the ship. Tintin, Haddock and Snowy successfully escape on a lifeboat and are able to salvage a seaplane which they take to return home only to crash in the Sahara desert.

It’s while in the desert that Tintin learns of the secret as Haddock hallucinates from the heat and suffers from a sudden lack of alcohol. His ancestor Sir Francis Haddock was captain of the Unicorn in the 17th Century. The ship was treasure-laden and was attacked by a pirate ship led by the masked Red Rackham. Sir Francis surrendered the ship but sank it with the treasures rather than let it fall into Rackham’s hands. It becomes clear that the three model ships each had a scroll and the scrolls together would lead to the location of the Unicorn.

In the Moroccan town of Bagghar, Tintin and Haddock learn that the third modal ship is there and owned by a wealthy villager in a bullet-proof display case. Also there is to be a concert given by an opera singer known as the Milanese Nightingale. The reason why is to break the case open and retrieve the third scroll. It works: he has all three scrolls and he’s able to get away despite being chased by Tintin and Haddock. Sakharine returns on the Karaboudjian but Haddock also arrives on.It’s revealed that Sakharine is a descendant of the Red Rackham and the two, Haddock and Sakharine, get involved in a fight that replays the swashbuckling swordfight between their ancestors. Even cranes are involved. In the end, Haddock is victorious and Tintin leads the ship to the dock allowing for Sakharine to be arrested by Thomson and Thompson.

Tintin and Haddock then use the scrolls to find the location. At the location, which is the hall built by Sir Francis, they find some of the treasure and a clue to the location of the sunken Unicorn. They both agree to continue the adventure.

This movie was a dream project of Steven Spielberg for decades. Spielberg took an interest in the cartoons when someone compared his Raiders Of The Lost Ark to Tintin. For years he’s wanted to bring Tintin to the big screen. Even Tintin cartoonist Herge became a fan of Spielberg’s movies and thought Spielberg was the only person who could bring Tintin to the big screen properly.  Herge died in 1983 but Spielberg could not purchase the full rights on Tintin until 2002. He even collaborated with director Peter Jackson to achieve this. Jamie Bell, who grew up reading Tintin comics, even came to Spielberg years ago about the idea. It wasn’t until years ago that this movie had started being made. Jamie Bell was Spielberg’s first and last choice to be Tintin. Even Peter Jackson recommended him after working with him in King Kong. The end result is the right mix for the movie.

The movie is very true to a Tintin cartoon. It’s set in the right time and features a lot of elements of European culture familiar in Tintin cartoons, like the artwork, the markets, the opera singer and the use of Interpol. The movie also has a lot of commonalities with a Spielberg adventure like Raiders Of The Lost Ark.  The animation was top notch. It features some of the best animation effects of the year. The story was kept in good taste and strayed away from cheap laughs and crude humor.  Simon Pegg and Nick Frost were also an excellent choice for being cast as Thomson and Thompson. Andy Serkis was also good as the drunken Captain Haddock. Daniel Craig was also good as the villain Sakharine. Snowy was always a reliable companion who had a liking for bones. John Williams was able to deliver a score that didn’t sound like your typical John Williams score.

Another big shock is that Tintin was heavily favored to win the Best Animated Feature Oscar leading up to the nominations. It had already won the Golden Globe and the Annie award. To the shock of almost everyone, the nomination didn’t happen. Instead Tintin’s only nomination is for Best Original Score for John Williams. I’ll never understand the Academy. I’m fascinated by the Oscar race and the biz’s pursuit of nominations and wins, but I’m still left confused even as I understand it more.

The Adventures of Tintin: The Secret Of The Unicorn is a pleasant surprise for animated movies. It’s not as cutesy or goofy as most of the animated movies this year or most years but it was a very enjoyable adventure. A refreshing alternative from one of those cutesy animated features.