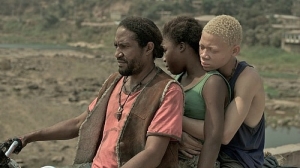 This is the third year in a row a film representing Canada has been nominated for the Best Foreign Language Film Oscar. The film’s title is Rebelle (English title: War Witch) and it’s a surprisingly good film.

The film is set in Southern Africa: possibly the Congo. Komona is a young pregnant girl at fourteen telling her life story to her unborn baby. It all starts at 12 where she is captured by the rebel army and ordered to become a child soldier. The first order she’s given is to kill her parents. Since then she’s now the war lord’s. She’s constantly on the battlefront with the rebel squad’s killing missions. Her killing prowess wins her praise from the rebel leader Commandant-Rebelle and he even names her ‘War Witch’. However she’s haunted by the ghosts of those she killed. Including her parents.

At 13, she meets Magicien: a boy with albinism who will change her life forever. The two fall in love and agree to escape. Magicien wants to marry her but she insists on the promise she made to her uncle; if a man is to marry her, he must give her a white rooster. It almost appears to be an impossible task until Magicien comes across a community of people with albinism. There he finds a man willing to give him a white rooster. There’s just one catch. The rooster has to be let free and he has to catch it. Magicien accepts the challenge with the villagers watching. After a lengthy try, he does catch it. Komoma is his.

Soon the solitude and hope for a better future is under threat. She still has images of the ghosts of her parents. And the warlords capture Magicien and Komona. They order her to kill Magicien but she can’t bring herself to do so. Magicien is then killed by the war lords and she is kept captive. She knows she would have to kill her way out. She succeeds so just after the ‘rape trap’ she created works on the soldier who almost raped her. She escapes after killing him to the help of her uncle and aunt. It’s after the birth of her child she has to find a way to make peace with the past and rid herself of her parents’ ghosts for herself and her child.

A common theme shown in films and movies is seeing the images of beauty and hope in the midst of ugliness. This film features a modern ugliness in the world: child soldiers in African countries participating in fighting. It may be a civil war or a rebel mission but it’s ugly. Many like Komona are ordered to kill their parents and are a permanent part of the army. It’s a childhood stolen. Even some of the girl soldiers end up being victims of rape amongst the leaders. This film does show the ugliness that Komona experiences but it also shows moments of hope that she can break free from her captivity. We see it in her romance with Magicien. It’s a unique moment when two children ordered to be killers drop their guns and fall in love. We see it in the birth of her baby. We see it in the end as she’s on a truck full of people cradling her baby. Moments of beauty in the ugliest of time is the film’s biggest quality. We see it and feel it.

Another accomplishment of the film is its ability to make what’s normally unwatchable watchable. No one wants to see a child soldier who’s forced to kill her won parents. No one wants to see a child being raped, even though the actual act of intercourse is hidden. Nobody wants to see a young girl giving birth in the middle of nowhere. It’s realities but the type of realities that we don’t want to know about. What redeems it is the images of hope I just talked about. It’s those qualities in the movie that makes a movie full of unwatchable realities be watchable.

The direction and writing of Kim Nguyen is the best quality of the film. Born of a Vietnamese father and a Quebecois mother, this is only his fourth feature film but this looks to be the one he’s able to make a name for himself. This film shows all the right moments and presents the story excellently to the point that the images of the ghosts are seen as an important part of the film instead of something ridiculous. Also good is the acting of actress Rachel Mwanza. Interestingly is that she herself was abandoned by her parts and was a street child in the Congo. She did an excellent acting job here with no phoniness. The acting of Alain Lino Mic El Bastien and Serge Kanyinda was also very good. The inclusion of both a score and African folk music also added to the atmosphere of the film.

Rebelle has already generated a lot of buzz outside of its Oscar nomination. It was in competition for the Golden Bear award at last year’s Berlin Film Festival and Rachel Mwanza won a Silver Bear for her acting performance as well as a Best Actress award at the Tribeca Film Festival. Other accolades it has received are Best Film from the Cambridge Film Festival, ranked in the Top 5 foreign language films for the National Board of Review awards and nominated for five Canadian Screen Awards; Canada’s own Oscars formerly known as the Genies.

Seeing how a movie situated in Africa makes for some interesting discussion how it can become an official entry in the Best Foreign Language Film category for Canada. It is because director Kim Nguyen is from Quebec. If you have seen the film, you’d notice that none of it is situated in Canada nor is there any mention of Canada in the screenplay. There’s some dialogue in French with the rest being in Lingala but that’s it. The Best Foreign Language Film category is a category that is always under frequent debate. First there’s the imposed limit of one film for every country submitting an entry into that category. Then there’s the language question. I guess it will continue to be a topic of discussion over the years.

Rebelle is an excellent story of finding hope and the survival of the human spirit in one of the darkest situations in the world around right now. Its story of love and hope is its best quality and makes it all that more memorable.