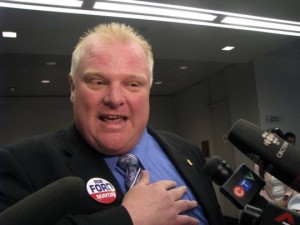 Rob Ford, always a controversial figure, faces his biggest controversy thanks to Gawker.

Most of you outside of Canada or even Ontario have a bit of an idea about the Rob Ford fiasco happening there but aren’t too clear who Rob Ford is. Us Canadians on the other hand can’t walk away from it. It’s here, it’s there, it’s everywhere. But what is it and why should it matter for all of Canada? Even for a Vancouverite like myself?

NOTE: I’m sure there are many Torontonians and Ontarians that will find my article too simple. Fact is I have many followers from around the world. The point is to explain the situation to those who don’t know who Rob Ford is and what the fiasco is about. Besides I’m from Vancouver so I’m not all too familiar with Rob Ford myself.

Rob Ford was elected mayor of Toronto back in 2010 and assumed office in December of that year. He was a Toronto City Councilor for Etobicoke North the previous ten years. Rob comes from a political family with his father owning the business DECO Labels And Tags (which Rob, his mother, and his other three brothers direct) and a former Member of Provincial Parliament and his brother Doug Jr. has assumed the role of Etobicoke North City Councilor upon Rob’s election of Mayor of Toronto. He’s a huge favorite of popular hockey voice Don Cherry who was at his mayoral inauguration in a pink suit.

Ask any Torontonian and they will tell of Ford’s controversial politics as mayor. At his best, he’s against excessive government spending and calls for the ‘end of the gravy train’. At his worst, he will make opposition to policies leaning more to the left much to the chagrin of many Torontonians. He’s been long known for voicing his opinions leaning towards the right, much to the annoyance of a highly liberal city like Toronto. However it’s been his attitude and his outspoken comments and actions that had already made Ford notorious even before the whole recent Crack-smoking scandal. Having his own talk radio show on Toronto air waves may have something to do with it. As for his political verbal outbursts and such, hmmm, where do I start:

Okay now you know what he’s like as a reckless politician. Now to see where all this crack-smoking fits in. Ford has had his brush with substances. He was arrested in 1999 in Miami for DUI and marijuana possession during his mayoral campaign. In 2006, Ford was accused of getting drunk at a Toronto Maple Leafs game and verbally assaulting the couple in front of him. In March 2013, former mayoral candidate Sarah Thomson accused Ford of touching her inappropriately and even suggested in a radio interview he was on cocaine. Even a Toronto City Councilor ask Ford to leave a function two weeks later because he appeared intoxicated.

Hard to believe all this that happened was just a forerunner to the ultimate, thanks to the website Gawker. Gawker claimed they had a video of Ford smoking crack cocaine from a Toronto Star reporter taken from a smartphone. Gawker said it appeared to show Ford in a clearly lit room although they also claim they can’t verify the authenticity of the video. Gawker even claimed the reporter asked for $200,000 for release of the video. Fact or fiction, the news sparked a heatwave of debate and talk all over Toronto. The heat could have come either because there’s so much opposition towards Rob Ford in Toronto or since it comes on the tails of another Canadian political scandal: senator Mike Duffy’s resignation after an expense controversy. Even Ford got into the act by claiming that the video is not true. Nevertheless this is rare for a scandal in Toronto politics to have all of Canada watching.

UPDATE: The last 48 hours have consisted of even juicier news on this. The man who reportedly showed Gawker the alleged video was recently murdered. Many councilors have since resigned over the controversy yesterday in which Ford called: ‘business as usual.’ This could lead to a bigger scandal than one thinks and could lead to Ford’s resignation in the future.

What will happen to Rob Ford after this incident and the aftermath remains unclear. He is still mayor of Toronto and shows no signs of resigning. The video is still unseen and still continues to make news. More news is expected to continue to unravel over the next days or weeks.

However the next election could tell the results. Ford might even resign before the election. I’m sure with Toronto having 2 1/2 years of experience with him, many thousands have already made up their minds should ford run for re-election. Also this incident shouldn’t really matter for all of Canada but it does show we can have some crazy politicians of our own.