Posted on 4 October 2013 by Jon The Blogcentric One comment 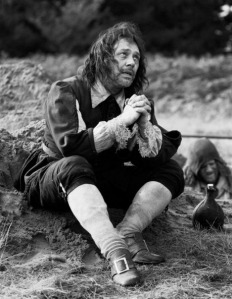 A Field In England is intended to be a historical drama/dark comedy. This makes for a unique and daring combination but does it work?

The story is set in the British Civil war of the 1600’s. Whitehead, an alchemist’s assistant, flees from his strict commander and meets a deserter from his own side and two other deserters from “the enemy’s” side. They all try to leave the war behind in search of an alehouse. Meanwhile they have a stew made with the mushrooms they found along the ground. Along the way they meet with an Irishman whom Whitehead had been sent to hunt down for stealing his master’s documents.

The Irishman however tries to get control over the group by letting them know of a treasure in the ground underneath. Whitehead is able to locate the area while the other three are digging or supervising. The exhaustion if digging takes its toll on the two diggers as they get into a fight and one is shot by the one supervising. After all the others run off, the one who did the supervising must now do the digging himself where he learns there’s nothing more than a skull. The Irishman then shoots him and then goes after Whitehead and the one surviving deserter. The two manage to escape and head back to the camp. However one of the deserters originally thought to be dead returns only to get embroiled in a shooting with the Irishman. After an ensuing shootout between the others, Whitehead is the one left standing and he buries the four. After burial, he returns to the hedgerow he originally deserted and finds the three soldiers still standing.

The thing about this movie is that it often appears clueless. All too often I’m sitting there in the theatre wondering what the point of the movie is or what the point of certain scenes were. Was his point about the British Civil War? Was his point about the warring factions: the Royalists and the Roundheads? Was it about the attitude the deserters shared? Was it to be experimental as noted by the many bizarre images? Was it another case of Ben Wheatley getting into his violence obsession? I was left very confused. The violence and even the alleged sodomy part really had me questioning. Even the special visual effects like the exploding sun and the strobe images had me wondering if Wheatley was trying to be experimental in his work.

I will admit that this is just my judgment from watching as I am unfamiliar with Ben Wheatley’s work. He has established a reputation in England with seven years of film making and video making under his belt. He is also primed and ready for the mainstream as he has already been slated to make an American-made film Freakshift and a sci-fi series for HBO in the future. Nevertheless I’ve been left assuming that A Field In England, which is directed by Wheatley and written by his wife Amy Jump, is an experimental picture for Wheatley. I saw nothing in the storyline involving any facts or factoids about the British Civil War and more of a focus on torture, violence and hallucinations. Even the language used in there didn’t sound like talk that would be used from the 17th Century but contemporary times.

The film has already received some acclaim. It has already won a Special Jury Prize at the Karlovy Vary Film Festival and was a Crystal Globe nominee at that festival. It has also made its round of film festivals and has already been released on DVD.

A Field In England appears to be more of a trip of psychedelia and violence than historical documentation or historical fiction. The best I myself can classify this film is an experimental work.