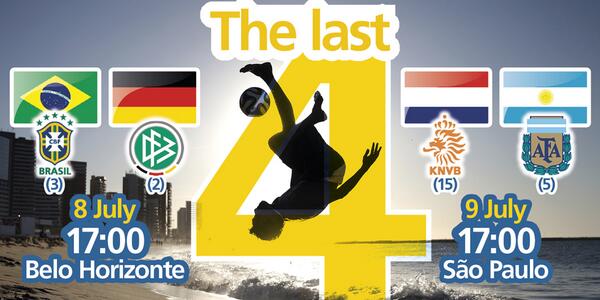 Well it’s getting closer and closer. We’re down to the last four countries standing. Tuesday and Wednesday will decide Sunday’s finalists for the World Cup. It’s a pair of interesting pairings as both look like rematches of a World Cup final from the past. And in both cases, both teams have played each other well to give a sign who has the advantage. So without further ado, I’ll look into the two semifinals and make my predictions.

Brazil: Oh yes, the pressures of being the host nation. Many times it’s been a plus as six host nations would go on to win the World Cup. However it can backfire and sometimes the host nation can miss. Even teams like Italy and Germany that have won World Cups in the past–even once before as host country– would miss. Brazil has performed very well in play and has delivered stellar wins such as 3-1 against Croatia and 4-1 against Cameroon. They have also shown their weak side with a 0-0 draw against Mexico and a 1-1 draw against Chile where they advanced after penalty kicks.

Their most recent match-up against Colombia ended with a good win of 2-1 but it was not without incident as Neymar had been injured terribly in the back. He was even carried of in a stretcher and is currently hospitalized at his home near Sao Paulo. Doctors say his spinal cord is broken but he is expected to make a full recovery within six weeks. They also said had it been an inch higher, he would have been paralyzed permanently. Not to mention Thiago Silva amassing two yellow cards and out of the semifinal.

With Neymar out and recovering and Thiago Silva sitting the semi out, Brazil is trying to get its team ready against Germany. Even Sports Illustrated have spoken about what Brazil needs to do. Brazil will face more pressure to win but it’s not to say they don’t have what it takes to do it. They have David Luiz, Hulk and Fred still active on their team. However David Luiz knows that he will have to step up his defense. Also coach Scolari knows he will have to make a wise choice for a replacement for Neymar. On a positive side, Brazil did demonstrate its defense after Neymar was injured and taken off with impressive results. So it shows it can be done.

Germany: Germany keeps on adding to their record of consistency. Their semifinal appearance here makes it their thirteenth time in their eighteen World Cup appearances they’ve cracked the Top 4. The biggest surprise of it all is that despite Germany’s consistency, they’re one of the least celebrated great teams of the World Cup. Sure, you’ll walk down the street and see a lot of people wearing jerseys of Brazil, Italy, England, Argentina, Portugal, Netherlands and  Colombia most of the time but how often do you see one wearing a Germany jersey?

Even now Germany continues to perform well and their achievements go quietly. Thomas Muller scored a hat trick against Portugal but that received less mention than the two-pointers from Neymar, Lionel Messi and James Rodriguez. Some may feel that it’s a bad thing but others, like possibly some Germans, may not feel that way. We shouldn’t forget that Germany has one of the most closely knit teams. Most of the players are less interested in individual glory and more interested in making wins happen. People like Muller, Miroslav Klose, Mesut Ozil and Bastian Schweinsteiger may have what it takes to be stars of the team but they’re top interest is playing.

Their unity as a team has paid off here in Brazil. They won 4-1 against Portugal and 1-0 against the United States. However it’s not to say they’ve had some strugglers here too. They did draw 2-2 against Ghana and had to go into extra time against Algeria after remaining scoreless in regulation. They did however win 2-1 in extra time. However a 1-0 win against France puts their chances of winning the World Cup, if not against Brazil, in question.

The German team appear confident after knowing of Neymar’s injury. Many people have already predicted Germany will win this match because of both Neymar’s injury and Thiago Silva’s expulsion. However it’s too soon to assume things. Brazil has won games before without their best players. Nevertheless this is a golden opportunity for Germany to seize.

My Verdict: Okay. This is a tough call since things can go either way. Some people will think this is a risky call for me but I’ll call it anyways. I think Brazil will win 1-0 in extra time. Brazil has performed well without their best players at times–heck, they won the 1962 World Cup while Pele was sidelined with injuries– but I’m confident they have what it takes to do it and a strong coach like Scolari to lead the way. Also let’s hope the spectators make it there safe and sound after the news of the freeway collapse in Belo Horizonte on Saturday that left two dead and 23 injured. One trivia note: whoever wins will set a World Cup record for the most finals appearances with eight.

Argentina: Argentina have not played as spectacularly as they have been known to do. They have won all their games but all their wins have been at a margin of just one goal: 2-1 against Bosnia, 1-0 against Iran, 3-2 against Nigeria, 1-0 against Switzerland and 1-0 against Belgium. Already this makes it the fifth time Argentina has made it as far as the Top 4 at the World Cup. This is especially relief for them since the last time they made it past the quarterfinals was back in 1990.  Argentina has been known to have a spectacular flavor about them but it appears missing this time around. One thing that is not missing is spectacular play from Lionel Messi. He came as one of the superstars with high expectations and he has delivered with a total of four goals and even delivered excellent supporting play. There has also been excellent supporting play from Gonzalo Higuain.

Here in Brazil, Argentina will have to pick up their game if they want to win. Sure, conservative play has paid off in the past like for Spain at the last World Cup. However it can be a risk as who knows how much the opposing team can score. And the Netherlands already delivered a big win with 5-1 against Spain. If Argentina want to have their first win against the Netherlands since the 1978 World Cup final, they have to pick it up and have all their players deliver more than what they delivered in the past. 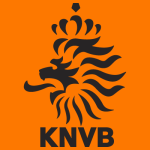 Netherlands: The Netherlands is considered by many the greatest team never to have won the World Cup. Three times the bridesmaid including the last World Cup, never the bride. Before this World Cup, not much was expected of Oranje. They had a disappointing Euro 2012 and they appeared like they hadn’t proven any improvements. However Louis van Gaal had a message to send the world. The team had already been made up of a lot of young players–nine of which were born in the 1990’s–and had top veterans like Wesley Sneijder, Robin van Persie and Arjen Robben. Boy did they prove a lot starting with their 5-1 win over defending cupholders Spain, a 3-2 win over Australia and a 2-0 win over Chile. They also continued well with a 2-1 win over Mexico in the Round of 16. Their 11 goals have made them the top scoring team of the Cup so far with both Robben and van Persie scoring three goals each and 20 year-old Memphis Depay a strong favorite for the Cup’s Young Player award.

However with all their spectacular play, they were given a reality check when they drew 0-0 against Costa Rica in regulation. Much to the teams relief, they won the penalty shootout 4-3 after substituting goalkeeper Jasper Cillessen with Tim Krul. If the Netherlands want to win en route to their fourth World Cup final, they should not rely on the facts that they’ve beaten Argentina more often. They should know Argentina can deliver when they have to. Also Argentina is better conditioned than the Netherlands at playing in the hot climates as seen in many games this World Cup.

My Verdict: I have to go with Argentina on this with the score 2-1. They haven’t been as spectacular as the Netherlands but they’ve been showing a lot of team unity and have delivered whenever they’ve had to. Also they know how to play hot weather better than the Netherlands.

Well that wraps up another set of predictions. I like how a lot of you like the predictions I’ve been making with the Group Stage and the first knockout games. All that’s left to predict is the final. Stay tuned Friday.