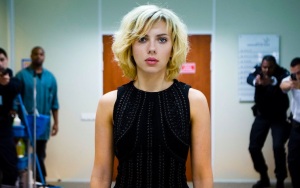 At first I was not interested in seeing Lucy. What got me seeing it was all the talk so many people who’ve seen it have said about it. I thought I’d check it out myself.

For those who haven’t seen the movie, it’s about a young woman who goes by the name of Lucy caught in a crime heist by surprise thanks to her shady and no-longer-living boyfriend. She then becomes a drug mule for a set of mind drugs that expands the brain’s use at one time from the alleged normal 10% to as much as 100%. This sets her up with getting even with her crime bosses, connecting with the other drug mules involved and making sense with the human race thanks to a college professor and her own mind’s supernatural ability to travel through time. Sound confusing? Well, you be the judge after you see the movie.

The funny thing about the movie is the whole plot of trying to make a connection between brain use at one time to the evolution of humanity coinciding with a criminal act. It’s a movie that tries to be humorous as in the case of Lucy telling her roommate of her health condition as well as action-filled in the story of as well as try and provoke thought about the human race and people’s ability to think. This is a complicated mix to try and create a good script that can entertain moviegoers.

One thing about the film is that it doesn’t make complete sense. Yes it’s a complicated story and yes there are parts that try to make it make sense over time. In fact the movie looked very ambitious at the beginning and appeared like it would deliver something to think about as the plot unraveled.  However there are many times in which I wonder if it could have been organized out better or even played out better. Like those parts where Lucy connects with the ape-like human from eons ago made me question its purpose and whether it really worked or not. This is one case when I leave the movie theatre thinking of what scenes could have been done better and how. I will give credit to the effort by director/writer Luc Besson given to make such a movie that includes an intriguing story. In fact I found the best thing about the movie is the fact we never know Lucy’s real name. But all the elements included in this story don’t blend together well as a whole. I felt it to be uneven and confusing at times.

The movie did have a lot of positive qualities. The best thing about it had to be the acting. I can’t complain about that. Scarlet Johansson and Morgan Freeman were good in their roles. They knew how to work their roles well otherwise the movie would have come across as completely ridiculous. They also knew how to keep our intrigue to the unfolding events. Choi Min-Sik and Amr Waked also acted well enough to keep the story intriguing and intact. The movies’ special effects were also excellent, and for not even $40 million. The score to the film by Eric Serra also fit the story well.

One thing I have to say about Lucy is that it was actually successful in getting people to talk about the movie’s topics. From the 10% brain-use hypothesis to the belief of evolution, that got a lot of people thinking, despite how disjointed the movie seemed. In fact I myself went to see it after two people I knew mentioned they saw it and gave their comments of what they thought of it. I find it interesting. That’s all I will say. It also paid off at the box office too. It’s still in theatres but it has made almost $125 million in North America and $378 million worldwide. I think the topic of the plot paid off in getting people to come. One feat it has achieved is this is Besson’s highest-grossing film to date.

Lucy is an ambitious science fiction movie that tries to make us think while keeping us fixated on the story and the action along the way. However it’s not all that together of a movie. Attention-grabbing, thought-provoking, but not really together.