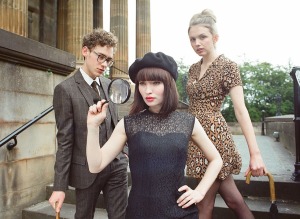 God Help The Girl is an original musical by Stuart Murdoch of three young Glasgow adults who form their own band.

Musicals are always very chancy in terms of putting them on screen, especially if they’re an adaptation of a legendary musical. Try putting an original musical on screen. That’s what God Help the Girl does. It comes off surprisingly well.

The film starts with Eve singing about the difficulties of being young. Mind you Eve does have her problems as she has an eating disorder which brings her to a psychiatric hospital. Her counselor there tells her she needs guidance to make it out in the world. Eve is defiant and breaks out of the hospital to head to Glasgow to make music.

Over in a Glasgow pub, she meets up with James who leaves his band after an on-stage fight with the drummer. James is an aspiring songwriter who works part-time as a lifeguard and teaches guitar to Cassie, a naive daughter of a rich family. A relationship cooks up with James over time. After meeting Cassie, the three of them spend a lot of time together and compose songs.

Eve is also looking for exposure and hopes to get it through Anton, a singer of the band Wobbly-Legged Rat who’s star is on the rise thanks to a local radio station promoting them. Eve gives Anton her tape hoping it will make it to the radio station and a relationship is brews between the two. The three form a band after James convinces Eve she needs a bass and drum for her songs. They call their band God Help The Girl and they perform a gig and knock the socks of the crowd.

However not all is well as Eve learns that Anton, who’s too arrogant for his own good, never gave the tape to the station, claiming her music lacks professionalism. The two argue and Eve walks off. To make matters worse James finds out about her relationship with Anton and is distraught to the point of distancing himself from her. That leads Eve back to taking pills and returning to the hospital. She meets again with the counselor who tells her she warned her about rushing out into the world on her own. Eventually Eve decides on her own path. The ending is not what one would expect but is fittingly appropriate for the film.

I have to say this is is a brave attempt from Stuart Murdoch to create an original musical and bring it to the big screen. It’s been a long time since there has been something like this. Musicals are always a risk to bring to the big screen whether they’re original or adapted. It’s obvious that God Help The Girl had some risks of their own. There are a few times that leave you wondering is the film lulls back into being a story and makes you forget it’s a musical until the next song comes on. Those who know big-screen musicals know about the feel of a musical on screen. There were a few times I felt the film lost its feel. The musical parts were very good and were able to stay away from crossing the line of  cheesy most of the time but I did notice some imperfections. Even having Eve with an eating disorder makes you wonder if that would make fans of musicals uncomfortable.

One thing I liked about this musical is that it had a lot of songs that gives one the look and feel of the excitement of 60’s rock ‘n roll. The songs for the most part are loaded with energy and really capture the essence of what it is to be young. Another unique thing about this musical is that it musically showed how a lot of the best songs are inspired. We see a lot of themes in God Help The Girl that are quite common in rock and roll songs such as the frustration of fitting in this world, feelings of love and the bizarre love triangles that arise. We also get another reminder about rock and roll. Just after Eve left for college to pursue music, James declares “I think she wrote her best music here.”

The funny thing about this film is that it includes the music from a group called God Help The Girl. For those who don’t know, God Help The Girl was an all-girl group formed by Belle and Sebastian lead singer Stuart Murdoch. They were formed for one time only in 2008 for an album that was eventually released in 2009. The film God Help The Girl is a musical set to those songs and is directed by Murdoch.

I don’t want to go into the subject of ego-tripping but Murdoch puts together a well-constructed and well-written musical that is entertaining. There are some noticeable imperfections in the choreography and editing but the film is mostly together. I also think this will be Murdoch’s only directing effort as I don’t see him directing any other movies in the future. Emily Browning is very good as the protagonist and is able to sing well in her first on screen singing role. Olly Alexander was also very good. He’s the opposite of Emily where he’s actually a singer in a band rather than an actor. Nevertheless he did very well. Hannah Murray was very convincing as the young naive Cassie. The three of them made an excellent trio full of chemistry. Pierre Boulanger was good but his role as Anton was underdeveloped and could have been more.

God Help The Girl was nominated at the Sundance Film Festival for the World Cinema Grand Jury Prize and won a Special Jury award for the ensemble. It was even nominated for the Crystal Bear award at the Berlin Film Festival. It has just been released in the US the last weekend of September and has just fizzled out with just grossing over $100,000. I blame it on the lack of promotion. I think it will develop a better afterlife as a Broadway musical. There’s no talk of a musical version of the film yet but I feel it has a lot of potential of being a hit in that format.

God Help The Girl is a flawed but entertaining original made-for-the-big-screen musical. Oddly enough I think I sensed a bit of Beatlemania there.