Oh man. If I would have known that yesterday as Woman’s Football Day, I would’ve posted this blog yesterday. Well the start of the Women’s World Cup is getting closer and closer. With it the excitement is building. I just walked into a local grocery store and I saw a display of soft drink cases saluting Team Canada. So upon the building excitement, here’s my look at Group B:

-Germany (1): Germany is like a lot of European countries that’s just slowly starting to accept women’s football. Actually Germany’s more welcoming than most and with good reason. As you know, Germany’s men, The Mannschaft, are on top of the world right now. Germany’s women, the Nationalelf (National Eleven), have a legacy of their own too. They’ve won two World Cups in the past and have won all Women’s Euros except the inaugural in 1993. They’ve even won FIFA’s Women’s Player of the Year these past two years: Nadine Kessler in 2014 and Nadine Angerer in 2013. However they have some imperfections of their own. One is that they’ve only won three Olympic bronzes. The second is that they hosted the last World Cup and were ousted in the quarterfinals on penalty kicks. Penalty kicks? The German men are penalty kick aces with a near-flawless record! That loss also meant they missed qualifying for the Olympics for the first time ever.

However the team really wants to have this World Cup as the one where they can rebound, if not win. The team consists of many members of female teams of the Bundesliga. Yes, the Bundesliga is one of many football leagues that includes female teams: 12 in total. The team looks like they have a very good chance to come out on top. Norway may be its closest threat to take #1 from them. As for winning the Cup, their chances look good too but they’re not perfect. These past twelve months they’ve had wins against Sweden, China, Brazil and England. However they’ve also had losses to Sweden and France. Canada’s the proving point. They have what it takes to win again but they have some weak spots. They will have to rise to the occasion.

-Ivory Coast (67): The Ivory Coast is another one of the eight newbies at this World Cup. The men have already made a name for themselves with three world Cup appearances and churning out big names like Didier Drogba and Yaya Toure. The women hope to follow in their footsteps. They’ve already won a bronze at last year’s CAF Women’s Championships. However it will be hard for me to predict how well they’ll do in the Group Stage since they’ve never played any of the other three countries before. Whatever happens will be a big learning experience for the team.

-Norway (11): Norway is another country that could easily be dismissed as a ‘blast from the past’ in women’s football. Winners of the 1995 World Cup and having won the only Olympic gold not won by the U.S.: back in 2000. They were definitely top when women’s football was starting to emerge but they’ve faded since. Failing to qualify for the 2004 and 2012 Olympics and being ousted in the Group Stage at the last World Cup. However they have shown signs of making a comeback. They were finalists at the last Women’s Euro back in 2013. Here in the Group Stage, Germany looks to be the only team that can beat them and even they have the ability to surprise Germany. Canada is the stage where they seek to redeem their reputation.

-Thailand (29): Thailand is one country which has never landed a men’s team at the World Cup but has landed a women’s team. And for the first time this year. It’s hard for me to predict how well Thailand will do in the Group Stage. The only team they’ve played before was Norway and that was all the way back in 1988. However Thailand has been impressive in their play over the past year. Sure they’ve mostly played Asian teams but they’ve delivered some very impressive wins even though they’ve also lost to China, South Korea and the Netherlands. Like the Ivory Coast, Thailand will also have a learning experience here as this will be their first World Cup.

MY PREDICTION: Without a doubt, Germany will come out on top in this group. Norway will definitely be second. Third will be a hard guess as both Ivory Coast and Thailand lack international experience. I’ll go with Thailand because of their impressive play in friendlies these past few months. 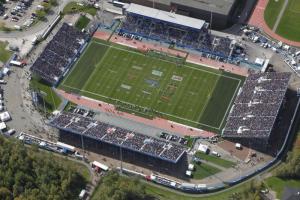 Of all the six stadiums that are hosting this year’s World Cup, this is the only one that is not a host site for a CFL team. Moncton was included as a host city for one of two possible reasons: either to include participation of a maritime city in the Cup or because Toronto couldn’t be a host city as they’re busy preparing for the Pan American Games later this summer. Whatever the situation, it’s good to have Moncton. This stadium was originally planned to have 28,000 seats in hopes of attracting a CFL team. Instead it was reduced for 10,000 for the current needs of a local football team. It has hosted the World Junior Athletics Championships and three CFL Touchdown Atlantic Games where expansion to 20,000 proved to be successful.

And there’s my focus on Group B. Group C is next and it’s coming hopefully Tuesday.