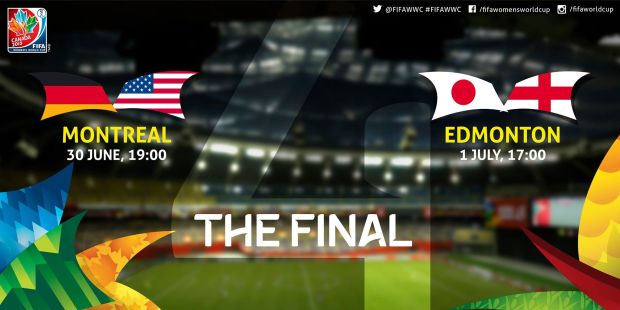 Okay, it’s getting closer to crown the winner. First the group play, then the Round of 16 and then the quarterfinals. Now we have four survivors. Three of which have already won the Women’s World Cup at least once. The other having their best WWC ever. It’s time to hold the semifinals to decide the two finalists and the two for the third-place match. Here are my thoughts on who should take the semis:

I really doubt FIFA.com has all the stats together on this. For the record, FIFA.com states Germany and the U.S. have met only three times before with the US winning twice. The US has scored a total of 8 goals in those matches with Germany scoring 7. Another website has stats from 11 years back and shows Germany has actually lost to the US three times in the seven times they’ve played each other in that time. The US’ only loss was on penalties. The US’s last actual loss to Germany was 3-0 at the 2003 World Cup semifinals.

The quarterfinal of Germany vs. France was something. Two teams raked both first and third in the world respectably playing a quarterfinal where it took penalty kicks to decide it. Now comes the semifinal and it’s also going to be something. The teams ranked both first and second in the world playing for a trip to the final. Adding to the drama is that both teams are the only ones to win two Women’s World Cups. So how do they stack?

In terms of play, Germany has been the stellar one in terms of scoring but it took France in the quarterfinals to send the message about Germany’s vulnerability. They may be #1 but they’re not invincible. The United States have been consistent en route to keeping their solid record of making the Top 4 of every WWC intact. They haven’t been scoring as big as Germany but they’re not making any losses happen and have only conceded a single goal. However playing to a 1-0 win against China in their quarterfinal may question their ability to challenge Germany in the semis.

This is a toughie. It’s even possible this game could end up being a 0-0 draw after extra time in which Germany would win on penalty kicks. I believe it could be as tight as Germany’s match against France on Friday. However I predict Germany will win 1-0 in extra time. Sure the Americans have the better history against them but Germany is the team that’s been playing with power.

Once again FIFA.com doesn’t provide too many reliable stats. They just mention Japan and England playing head-to-head twice with a 2-2 draw (2007 World Cup) and a 2-0 win for England (2011 World Cup). Actually another website helped me track down a game the two played in 2013 where they drew 1-1.

The Nadeshiko, as the Japanese women are commonly called, are defending champions and they are playing like the champions they’re reputed to be. They’ve had nothing but straight wins. Even if they are conservative in size, they’re showing themselves to be a team strong, ready and full of talent from Homare Sawa, their most capped player on the team, to 22 year-old Mana Iwabuchi who scored the winning goal against Australia. However the play here in Canada has showed that teams are capable of rivaling them. Australia gave an excellent challenge as did ‘lesser’ teams like Cameroon and the Netherlands. I know they haven’t really shown any vulnerability here in Canada but they will have to deliver more against England if they want to make it to the finals.

As a Canadian, I’m not too happy about England beating us in the quarterfinals. However this is a breakthrough for the Three Lionesses as this is England’s first-ever trip to the WWC semifinals. Having their own Premier League sure helps. I’ve often said that the women can teach the men a thing or two about winning. Sure, they’ve never lost to Japan but Japan has a record of strong play and a field with more talent and experience. England is still growing at their own pace. It’s a lot of growth but I don’t think it’s enough to make the World Cup winners. In fact their loss to France in group play is an example of how vulnerable England can get.

I feel Japan will take it 2-1 in extra time.

And there you go. My predictions for the semifinals. Stay tuned to see who two teams will be playing for the Cup on Sunday.