By Jon The Blogcentric on 3 January 2016 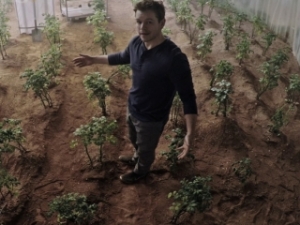 Matt Damon plays an astronaut stranded on Mars but determined to live in The Martian.

I’m sure by now most of you have seen the story of how Mark Watney got left behind on Mars. The sandstorm on Mars and the debris that hit him left everyone escaping mistaking him for dead. Mark would then have to survive by growing his own food and creating his own habitat. It would work to his advantage but NASA would eventually get the message he needed to be brought back home. It would take a connection with a mission, sheer determination and camaraderie with his fellow astronauts to bring him back to earth successfully.

The movie is based off the book by Andy Weir. I can’t judge for myself on how the film compares to the book. However I will say this is a very good adaptation of a story of a man and his fight to survive on a strange planet. One thing I will have to say is that even though this is a sci-fi fantasy, the film would still have to be true to fact in a lot of areas. It would have to know Mars’ oxygen levels or lack thereof, temperature levels, climates and terrain and even know how long transportation and even communication between Mars and Earth would take. Today’s audiences aren’t as welcoming towards cheap hypotheses of space like they used to be decades ago. Not only would they need those facts but they would have to be incorporated into the script and made to work into a story that was suspenseful but also entertaining. The Martian succeeds in doing just that and doesn’t lose its comedic edge in the process.

The Martian is a reminder of why films about space travel still fascinate us today. They remind us of why we like to imagine trips to outer space including domains humans have never set foot on. They even capture our intrigue when a mission fails and the astronaut’s lives are at threat. They get us wondering “Do they make it or don’t they?” You may remember how Gravity caught our imaginations just a couple of years ago. Now it’s The Martian with its story of an astronaut trying to stay alive yet eventually return back to earth.

Some may question the mix of humor into the story if it was a smart choice, especially with the inclusion of disco songs Mark hates but keeps him alive.  No doubt it was an entertaining choice as it entertained crowds. Comedy is all hit and miss and I feel it made the right choices in terms of adding in the comedic elements. In terms of drama, it didn’t make the more tense moments of life-or-death too tense for the audience. It kept us wondering and brought our hopes up with each positive moment but the intensity was not all that thick and that’s what made it win with the crowds.

No doubt it took the direction of Ridley Scott and the writing of Drew Goddard to make this film work. Ridley knows how to bring out the best in unique stories and make them win with movie crowds. The story however rested on the shoulders of Matt Damon. His performance where he mixes humor with the will to survive helped the film achieve the charm it needed. Despite Damon owning the movie, it’s not to say supporting performances from Jessica Chastain, Kristen Wiig, Jeff Daniels Michael Pena and Kate Mara didn’t have their importance. They helped too. Other top elements of the film included the music from Harry Gregson-Williams and the special effects team who were able to re-create life on Mars to a tee.

The Martian is a sci-fi comedy of the best caliber and has the best elements of a ‘popcorn movie.’ This is something only a director like Ridley Scott can pull off well. Very entertaining.