Posted on 8 October 2016 by Jon The Blogcentric One comment 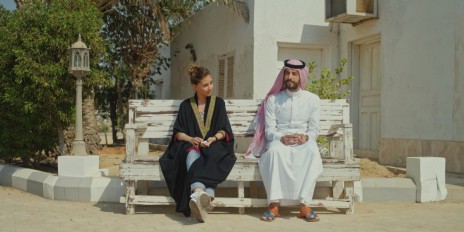 Barakah Meets Barakah is a Saudi film of a man and a woman from separate societies who fall in love.

On opening night of this year’s Vancouver International Film Festival, I had the good fortune to see Barakah Meets Barakah. It is Saudi Arabia’s official entry in the Best Foreign Language Film category for this year’s Oscars and proved to be an enjoyable film.

At the beginning of the film, we meet Barakah: a young man from a section of Jeddah full of tradition and religious values. However Barakah does have a liking for the arts and especially drama as he agrees to perform in a community production of Hamlet. We also meet Bibi: a young woman who’s a local celebrity in the city due to her popularity both on television and in social media where she commonly posts videos of her speaking a message. In fact her mother who adopted her is one of the heads of the network. Both are opposite personalities as Barakah is a civil servant obedient to tradition while Bibi is very liberal both in what she wears on television and what she says in her Instagram videos which feature just her mouth talking. Both however live in a time where religious law is strictly enforced in Saudi Arabia.

The two meet for the first time by a bizarre circumstance. Bibi has a modeling shoot out by the coast where her face, arms and chest are very visible. Barakah is commissioned to stop it because the shoot hasn’t been licensed on the property. However he does eventually compromise. The two later meet again by accident. This time it becomes something despite his dating skills being non-existent.

Despite their feelings for each other, dating would be next to impossible. Barakah lives in area full of common people and Bibi is more the high society of the town. On top of that, there’s the religious police who are very suspicious of unmarried unchaperoned pairs out on a date. There are criminal penalties for that under religious law. Their dates have to be completely secret. Over time, they become a lot more even with the help of Barakah’s friends.

Dating does become difficult as Barakah keeps his love secret from others. Even Bibi faces difficulties as her mother is disapproving. However the mother finds something positive out of this when she visits the townswoman in Barakah’s neighborhood, who plays a mother figure to Barakah, to ‘cure’ her of her infertility. It works as it is announced she will have a baby. Instead of it bringing Barakah and Bibi closer together, it causes more friction.

Eventually it does come to a point when the two do call it quits. They can’t handle it anymore. It’s not until Bibi learns a truth about herself and how her mother appears to treat her as ‘disposable’ that there’s the turning point. The film ends convincing us that it was meant to be after all.

It’s very obvious in this film writer/director Mahmoud Sabbagh has something to say about imposed religious values in Saudi Arabia. It’s not just about it causing a detriment to people’s daily lives but also how it has robbed the people of progress and hope they were anticipating in decades past. As a Catholic, I can understand this belief. I’ve seen how the Church has influenced strict moral laws on the people in a lot of countries in the past and now most people in those countries are sick of the Church. Just ask Ireland. I believe morals and values work better on people when they adopt them themselves rather than have them forced upon them.

Although the film makes Islamic law look more like a problem than a help, he is able to make his statement in a comedic way in this film. Yes, religious law in these countries has resulted in a lot of deaths and unnecessary imprisonments and has even led to a lot of friction and civil unrest. Nevertheless Sabbagh is able to make light of the problem by creating a romance that is both critical of imposed religious law in his country but also able to satirize it too. He satirizes it in the scene where Bibi is taking an Instagram photo of the henna tattoo of her belly by blurring her belly for all of us. He also sends a message when Barakah takes the mini-Koran dangling from his rear-view mirror and replaces it with the thing given to him by Bibi.

The film not only focuses on religious influence in Saudi Arabia but also about the classism there. The separation of the upper class and the common or lower class are commonly shown in films but Sabbagh shows what the gap is like in Saudi Arabia. It’s a common thing in most developing countries for the gap to be that much bigger. No wonder something like that would cause friction in a romance between Barakah and Bibi. Even knowing how her mother calls her Bibi instead of her real name Barakah possibly to hide Bibi’s poor past is there to send the message.

Sabbagh succeeds in delivering a comedy that’s both smart and thought-provoking. He does have a message to deliver but he delivers it in an entertaining way with the right moves and without it being overly preachy. The film has already won a special prize at this year’s Berlin Film Festival. Hisham Fageeh was very good as the common young man Barakah as was Fatima Al-Banawi as the progressive Bibi. There also good supporting performances from the actress playing the local townswoman and the actress playing Bibi’s mother.

Barakah Meets Barakah is a good comedy that will both make you laugh and get you thinking. Also in a time when ISIS has made a lot of bad news, it is welcome comic relief.