By Jon The Blogcentric on 1 November 2016 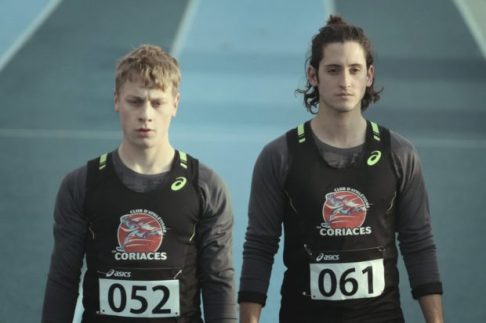 Antoine-Olivier Pilon (left) plays a gay teen who wants to settle a score with his bully (Lou-Pascal Trembley; right) in a track meet in 1:54.

As I’ve said countless times, Quebec is the leader in Canadian cinema. 1:54 is one of the latest to come from la belle provence and this is not your typical teen story.

The film begins with 16 year-old Tim returning to high school. The first back-to-school moment comes from Jeff, who has taunted him since the age of 12, throwing food at him and later posting the video of it on YouTube. It’s not easy for Tim to make new friends. He’s a gifted student who’s great at chemistry but it doesn’t attract too much appreciation despite the chemistry teacher’s encouragement. Life at home is difficult for Tim as he has been distant with his father since his mother died four years ago.

If there’s one escape from Tim’s problems, it’s with his friend Francis. He’s able to share Francis his second-biggest secret: he’s able to create a bomb. However Tim’s unable to share with Francis his biggest secret that he’s gay and attracted to Francis. Francis has been developing more security in being gay himself but that all changes after Jeff bullied Francis into admitting he’s gay. It upsets him to the point he jumps off a bridge, right in front of Tim.

Francis’ death affects Tim into questioning why he was always embarrassed about his sexuality. And right while a girl named Jen is taking an interest in him. Tim wants to get even with Jeff. Sure, he’s become friends with Jen who actually rejected a pass from him months ago. Tim actually decides the best way to get even is to get him where it hurts: in running. Jeff is a stellar half-miler who dreams of of making the National Championships. Tim was also a talented runner who even rivaled Jeff in the 800m at aged 12 but quit just after his mother’s death. Through the encouragement of a coach who knew him back then, Tim returns to running and to be the one qualifying for the Nationals instead of Jeff.

Jeff thinks he can use the video to threaten Tim’s goals of beating him and it works, but temporarily as Tim resumes running with top-secret training drills from his coach and Jen as his training partner. The running goals even rekindle the closeness between Tim and his father as he’s back to supporting Tim in his running and delighted to see Tim happy again.

At the Provincial Championships, Jeff and Tim run separate heats and they both qualify for the finals both with the fastest times of the heats and only .02 seconds between them. This sets up for excitement for the final as the winner qualifies for the nationals. At the second turn, Jeff notices Tim in front of him and tells him to look to his friend. Standing by the side is the friend with the video waiting to download it. Tim is undeterred but before the final turn, the friend downloads the video right with Tim watching. The trick works. Tim slows down in embarrassment with Jeff coming through to win.

While Jeff is celebrating his win, the whole school’s track team gets the video on their phones. No doubt Tim is humiliated. There’s no way out. Even his father finds out. The father may be shocked to learn Tim is gay but he promises to be supportive of him. Despite Tim’s father, Jen and the coach trying to be supportive, Tim feels there’s no way out. Not while the video’s on YouTube and all over social media where Tim constantly gets taunted by everyone at school, including Jeff. Tim decides there’s only one way to end this all and it’s at Jeff’s celebration party at a night club. Tim decides it’s the perfect place to set off the bomb he showed Francis. The story leads into a heavily climactic ending that’s a surprise to all.

No doubt this film is full of topics. It’s about teen peer pressure, teen sexuality, depression, teen violence, teen competitiveness, but most noticeably bullying. A lot packed into one film. Yan England has even mentioned that he hopes this film stimulates a lot of discussion of the topics. No doubt it’s worth talking about.

It’s definitely a film that can bring back bad memories of high school to many. Especially me. I struggled with learning disabilities which were also behavioral disabilities. The behavior I displayed in a lot of cases would be cause for fellow teens to easily single me out. It doesn’t upset me as much but I’m still not happy about my past. In fact years ago, one person got on the topic of bullying and asked those in her conversation, including me, if we were bullied. I responded: “I was a bully’s delight,” with a smile of disgust. The craziest thing about the film is that it brought back a lot of the anger and frustration I had when I was a teen. Memories I thought I resolved those many years ago. What can I say? All I can say is high school never changes. Teens still think that mocking others different from the will make them look cool. Problem is it does make them look cool in front of their peers. I like the end when Jeff tells the police of the video: “It was a joke.” That common response from teens: “It was a joke.” They think it’s that easy to get off.

The frustrations Tim goes through are a lot of frustrations teens go through. Being bullied by someone for years can be a frustration one can have. The frustration of learning of one’s homosexuality can definitely be a frustration, especially since many teens are known to respond with hostility. Trying to be someone is a frustration most feel. It’s obvious Tim wanted to be somebody other than Jeff’s victim. Francis’ death made him want to get even with Jeff and he thought he could do it in track. He had what it took. Then the race. This was to be Tim’s chance to get even with Jeff for the many years of bullying and for Antoine’s suicide. Instead it became the creme de la creme of Jeff’s bullying and the biggest humiliation of Tim’s life.

You could easily see and feel Tim’s frustration at that moment. Even with the support of people like his coach, his father and Jen after the incident, it just bothered Tim so much, he snapped. I can easily remember about frustrations I went through as a teen and feeling like my situation was hopeless. It’s easy to forget your parents’ love for you or even support from your friends when this happens. It’s easy to see why Tim would snap and do this.

As for the film itself, this comes across as a conventional story at first and you think you know the ending when you see the track competition. However it’s right there when it becomes a new movie. That’s the best thing about the film: it’s like three films in one. Yan England is taking a lot of unorthodox, if not all that creative, steps in creating a film that’s unpredictable. The victory over Jeff we all hoped for all of a sudden turns into a worse situation for Tim. A surprise to all of us in the audience. That scene at the beginning where Tim shows Francis his bomb seems to be an irrelevant scene as time goes on until the very end. Even the scene at the end when we don’t know what will happen to Tim’s bomb will have you at the edge of your seats. However, I will say if the movie had the right scenes at the end. I’m thinking it could have ended better.

This is a very good first feature-length film for writer/director Yan England. Yan used to be a young actor in Quebec with the teen variety show Watatatow back in the 90’s. He’s moved into directing and writing. In fact his short Henry was nominated for an Academy Award years ago. Here he delivers a film relevant to what’s happening with teens and the subject of bullying. He shows how much bullying has ‘progressed,’ if you can truly call it that, with cybertechnology. He also does a very good job in creating three movies in one.

Antoine-Olivier Pilon delivers again in a character completely different from the one he played in Mommy. Instead of an eccentric, he plays a down-to-earth teen filled with anger and hurt but ambition. He also played the frustration parts in the last part of the film very believably. Another accomplishment for him. Sophie Nelisse was very good on playing the supportive friend. She shows a maturity since Monsieur Lazhar. David Boutin was very good as the father trying to be supportive and Lou-Pascal Tremblay was very convincing as Jeff. You will end up hating him! The techno music score in the film added to both the excitement and the drama.

1:54 is not your typical teen movie. It deals with a lot of serious issues very well, if imperfectly. It has some technical glitches but it does engage the audience and is worth seeing.