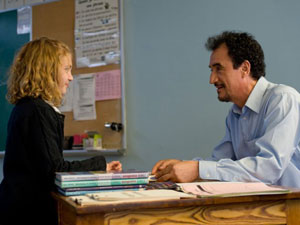 The film starts with what is to be a typical day at a Catholic elementary school. A boy named Simon is getting the milk for the day. As he walks into his classroom alone, he discovers his teacher Martine hanging. This is very hard for the students and the school. One of the difficulties is finding a new teacher for the students of the deceased teacher’s class. In walks Bachir Lazhar, an Algerian immigrant. They are hesitant at first but they agree to hire him.

Known to few is that Bachir’s immigration status is in question by the courts. A package he receives comes into question. The immigration court asks him why he won’t return since ‘Algeria is back to normal’ but he replies “Nothing is ever really normal in Algeria.” The interrogations eventually get frustrating to the point Bachir admits of the fire in Algiers that killed his wife and children back in the 90’s. That fire was no accident.

The class tries to move on as usual. For some students, it goes fine. For others like Simon and Alice, who witnessed their teacher hanging, it’s difficult and painful. Alice is more vocal about her difficulties. She makes a speech in class about violence and how the hanging has an effect. She also has a softer side and develops a liking for Monsieur Lazhar, even learning about his home city of Algiers. Simon is more reserved and difficult. He’s not the same since the hanging and appears like he has something to let out but can’t. He even resorts to fights with other students. Home life isn’t easy for him because his parents are rarely there. However something has to be done as it’s discovered he has a picture of Martine which he drew angel wings and a noose on.

Dealing with the students is not an easy task to do either. The elementary school is worried about the suicide being brought out into the open. Plus teachers are now under strict limits over what to deal with students’ issue and how to deal with them. The new laws set twenty years ago changed lots to how a teacher can function towards a student. This is hard for Bachir as he wants the students to heal from this trauma. Especially Simon, whom the teachers are considering expelling. We learn shortly before Martine hung herself, Simon was hugged by Martine while he was crying but told his parents she kissed him. The parents came down hard on her.

What happens in the end is one scenario ends on a bright note and another scenario ends on a low note for Bachir. In the end we get a turnaround that’s more valuable than Bachir keeping his job as a teacher. Something that the school board could never give the children.

The role of Monsieur Lazhar was that of a man who would help bring help when it was needed unexpectedly.  Right at the beginning of his teaching he would tell the meaning of his name:  “Lucky” and “Tell the good news,” In the end, he was the lucky one who would give the good news to the children. The students in turn would be the lucky ones as he would help the most troubled of the students heal from the trauma. He would succeed where the school board and the counselor would fail. Even in the end, his impulsive helping of the students would be too much for the school to handle. The ending would show the common belief that no good deed goes unpunished but it’s not without its rewards. Bachir Lazhar would give to the students and he would receive from them as well. His teaching of the students would also help him in terms of his own healing from the loss of his own family.

The best quality of the movie was in its gentle storytelling. We have a situation of a troubled school being taught by a teacher with a troubled past of his own. He faces two pressures of keeping his new-found job, keeping the peace of his classroom since the suicide, maintaining the peace of the school and being able to stay in Canada to avoid persecution back home in Algeria. All of this was told in a gentle manner that would keep the audience intrigued and hoping for the best for Bachir Lazhar and for Simon and Alice. That was its best quality.

The acting overall was excellent and stuck to their parts well without coming across as showy or phony. Mohammed Fellag was excellent playing a teacher with a troubled past thousands of miles away. The children were also good as they played genuine child roles instead of the typical cutesy acting Hollywood normally gives them. Their feelings, traumas and actions were not over-the-top either. The directing and scriptwriting of Phillippe Falardeau was also well-written, although not a standout. Known to few, Monsieur Lazhar is actually an adaptation of a one-man monologue. Falardeau did a very good job in creating and directing a script with a multitude of actors. He did a very smart job in making the story very real.

Intersting how Monsieur Lazhar gives Canadian film a unique achievement. This is the first time Canadian entries in the Best Foreign Language Film category has been nominated for two years in a row. Last year was Incendies. Interestingly two of the three producers of Monsieur Lazhar also produced Incendies. The Oscar nomination isn’t the only acclaim Monsieur Lazhar has received. The film also won the Viewers Choice Award for Best Canadian Film at the Toronto Film Festival, Best Film award at the Valladolid Film Festival and has been nominated for nine Genie Awards, Canada’s national award for filmmaking excellence. Surprisingly, it was not shown at the Vancouver Film Festival. It’s a shame because I would have liked to have seen it if it was out then.

Monsieur Lazhar is a film that starts out on a dark subject but it ends on a bittersweet positive note. The warmth of Monsieur Lazhar reminds us how people can succeed where the system fails. We need more people like Monsieur Lazhar out there.