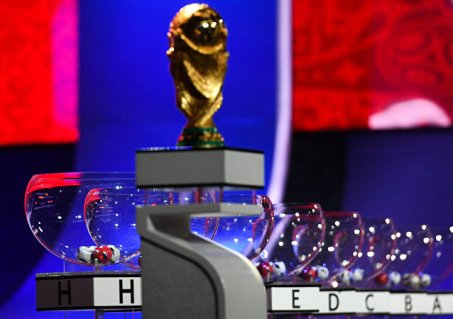 It’s right there on FIFA’s website on how much it took to determine the 32 qualifiers for next year’s World Cup: thirty months, six confederations, 209 teams, 868 matches played, and 2454 goals scored. All 31 available berths up for grabs were decided by November 15th. December 1st was the day to decide the four teams for all eight groups for the World Cup.

Qualifying for the World Cup is already enough of a battle. The respective continent’s confederations contested their matches and conducted their own qualifying format for deciding their qualifiers for the World Cup. There were even two countries that qualified via a ‘wildcard’ berth where they’d have to play a team from another continent twice. The thirty-two qualifying countries were all decided more than two weeks ago. The qualifying rounds made a lot of news for those that qualified, but those that didn’t got a lot of news of their own too. The second-round qualifying matches for the CAF saw two of Africa’s best-ever teams–Nigeria and Cameroon– pitted against each other. Only one can qualify and it ended up being Nigeria. Another surprise was the Ivory Coast being surprised by Morocco and Ghana being overtaken by Egypt. Asia didn’t have many surprises, but Qatar finished last in the Second Round group. Not good since they will be hosting in 2022. The CONMEBOL almost saw the non-qualification of Argentina, but they recovered to win their last game and qualify. Instead the most shocking non-qualifier was 2015 and 2016 Copa America winner Chile which was third the day before the final game for all teams.

The biggest shockers in qualifying came from the CONCACAF and Europe. On the last day of CONCACAF qualifying, all the USA needed to do to qualify was beat Trinidad and Tobago in their last game. It was something they could do as Trinidad would finish last of the Final 6. Instead the USA lost 2-1. That was enough for them to kiss their qualification chances goodbye as Panama beat Costa Rica 2-1 to qualify and Honduras beat Mexico 3-2 to earn a berth in the interconfederation playoff against Australia. Europe had some of the biggest shockers as The Netherlands didn’t even qualify for a UEFA playoff round and Italy thwarted their playoff against Sweden losing 1-0 the first game and a scoreless draw the next. Russia 2018 will be the first World Cup since 1958 in which Italy didn’t qualify and only the third World Cup ever with Italy absent!

Now enough of this World Cup’s also-rans. On with those that qualified. Twenty of the 32 teams for Russia 2018 played in Brazil 2014. Brazil makes it 21 for 21. All former World Cup winners except for Italy will be present. The team with the longest absence making a return to the World Cup stage in 2018 is Peru whose last World Cup appearance was back in 1982. There are only two countries that will make their World Cup debut in Russia: Iceland and Panama. Iceland is especially noteworthy as it has become the first nation with a population of less than 1 million to qualify for a World Cup! Actually there aren’t even half a million people living in the nation of Iceland so that makes it even more remarkable.

Now onto the draw. The draw was held Friday at 18:00 Moscow time at the Kremlin. Legends from all eight countries that have won the World Cup in the past were present: Laurent Blanc, Diego Maradona, Gordon Banks, Cafu, Miroslav Klose, Fabio Cannavaro, Diego Forlan and Carles Puyol. Gary Lineker was host of the event and Russian legend Nikita Simonyan was also part of the event, Vladimir Putin was defintely in attendance, an d the Igor Moiseyev Ballet provided the performance before the draw.

Now onto the actual drawing. In the past, FIFA has organized the pots to give appropriate correlation with continents and availability. FIFA wants the eight groups of four to be a case of no more than two European teams and only one team of the other confederations. There are fourteen European teams (UEFA) including host Russia, five South American teams (CONMEBOL), three teams from North and Central America and the Caribbean (CONCACAF), five African teams (CAF) and five teams from the AFC (Asia and Australia).

FIFA wants to create better parity among the groups for this World Cup. FIFA doesn’t want a case of two or three top-ranked teams in a group as only two can advance past the Group Stage. We all remember the dreaded Group D of 2014 which consisted of three top-ranked teams. This time around FIFA decided to break the draw into four pots of eight. The pots are all based on the teams’ FIFA World Ranking as of October 2017, regardless of continent. The only exception being Russia as the host nation is always automatically in Group A. Here’s how the pots break down with their confederation listed and their ranking in brackets:

As you can tell by the pot arrangements, they’re trying to make the contest as balanced as possible. In addition, FIFA knows the top seeded teams are Team 1 in each group–host nation being Team A1– but FIFA still wants a drawn ball in all cases to make it official, even drawing the order of the last group team drawn. That explains all those red balls at the beginning of the draw; to make defaults official. Confederation rules still apply as far as maximums per group. Pot 1 had six UEFA teams and Pot 2 had four. It could have been a case where four groups could have reached their maximum two for UEFA teams by the time Pot 2 was all drawn out. Instead it was just two groups with UEFA berths completed. Drawing teams and placing them in the right groups was not as hard and tedious as I had anticipated. In the end, all eight groups had their teams drawn and allotted with only minor complications which were sorted out with ease:

So those are the groups for the 2018 FIFA World Cup. It makes for some interesting analyses. The draw usually tries to make for the host nation to have an easy time qualifying to the knockout phase. Russia has a good group with only Uruguay looking to be a real threat to them. Group B is most interesting not because of the challenge of the teams, but of the geography: Spain, Portugal and Morocco! The draw was aimed so that there could be better parity among ranked teams, but there are possibilities of a ‘Group Of Death’ or two. First bet is Group D; Croatia and Iceland are underdogs that can cause a surprise, and Nigeria meet Argentina for the fifth time out of six World Cups. The second potential Group Of Death could be Group F with Germany and Mexico plus possible upsets coming from either Sweden or South Korea.

And there you go. That’s the Final Draw for the 2018 FIFA World Cup. The teams now have six months to prepare themselves and be among the top two to advance. Lots of excitement guaranteed.