By Jon The Blogcentric on 4 November 2018 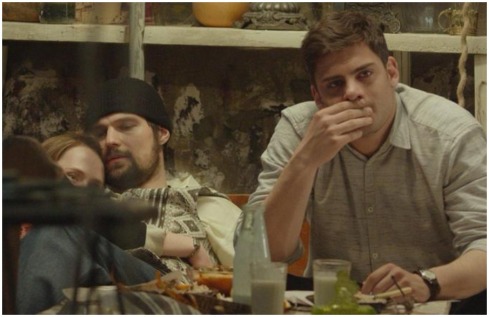 Dovlatov is a focus on writer Sergei Dovlatov, played by Milan Maric (right), and what drove him to defect from the USSR.

Every now and then one sees a biographical film that not a lot of people know a lot about, but grow to understand after the film’s end. Dovlatov is the Russian film of the Soviet-American writer Sergei Dovlatov.

It is November 1, 1971. Leningrad resident Sergei Dovlatov has a talent and a yearning to write, but the Soviet government won’t accept his writings. His writings are very truthful to what is happening, but the Soviet government wants writings that glorify the nation, especially the Soviet regime of the time, and champion factory workers. With Leonid Brezhnev in power, the pressure is even harder as writers of such are either censored or unemployed. Dovlatov is denied membership into a Writers Guild and can’t get any of his poems or stories published. Dovlatov is reduced to pounding out articles for a factory magazine like many of his peers. Dovlatov is expected to help contribute to a film from the factory where workers dressed up as legendary writers commemorate Soviet achievements on the eve of the Revolution. Dovlatov can’t take that seriously and his superiors aren’t happy.

His married life is a frustration. He is on the verge of divorcing his wife Lena and he’s currently living with his supportive mother. He is allowed to see his daughter Katya. Dovlatov does find a break from it all. Each day he meets up with many other literary comrades going through similar struggles in this Communist regime. They listen to jazz, play music and tell stories of their frustrations.

Dovlatov’s life during this six-day period seems like a daily ritual. He begins the day with assignments he finds uncomfortable, tries to make the necessary connections to get his Guild status, and ends his day in a literary and artistic salon with colleagues of his own.

However there are two incidents that shake Dovlatov up. The first is when he’s sent to do a celebratory article of subway builder and poet Anton Kuznetsov. They meet in a subway dig with the intention of doing a ‘pure and prose’ article, but both are shocked to have discovered skeletons of children from a World War II bombing. The second is when he meets with a friend who’s a Black Market dealer. Often throughout the film, Dovlatov talks of looking for a German doll for his daughter. He talks with the man, but the police crack down on him and shoot him dead. The film ends after those six days.

I’ve seen a lot of biographic films. I’ve seen a lot of biographies that are frequently from birth to death. There are even some that focus on the period of a person’s life where they emerge into their greatness. They could be a short period of time but most end up being a long period of time. There have often been a lot of films that focus on that one moment in a famous person’s career that either makes or breaks them, like the Emancipation Proclamation in Lincoln or the writing of In Cold Blood in Capote. It’s even possible to use a week’s period of time that could be when this famous person chances leading into the future path of greatness.

Here in Dovlatov, the focus is on six days. Usually a film maker would pick out a six-day period that could be what changed Dovlatov. Instead the film focuses on a six-day period that could be any six-day period in Dovlatov’s life before he finally defected to the United States in 1978. I think what the focus of the film maker was intended to be was to focus what it was like for Dovlatov to live in Soviet Leningrad. The filmmaker’s intention is to have Dovlatov’s feelings and mindset resemble his works of writing. We shouldn’t forget that soon after the death of the USSR, writers that defected or writers that talk of past-Soviet life became writers of high fixation. Dovlatov may have died in 1990 at the age of 48, but his writing became hugely admired in Russia.

The film doesn’t just show life in Soviet Russia at the time, but gives the viewer a good feel of it. It seems slow at first, but it is very telling. It’s about a writer seeking renown or simple publication, but won’t get credentials because he won’t conform to the writing style the Soviet government demands. During his life, he sees the troubles and the weariness of people in Soviet Leningrad. We should also remember that Leningrad was the name of St. Petersburg during the days of the USSR. What he sees is ugly and hard. Even his own personal life is a frustration. He may get a break when he’s at the parties with his artistic colleagues, but it’s only temporary. The next day, he has to go back to doing what the government wants him to do. One can see the frustration he goes through. One could even understand how trying to get a German doll for his daughter isn’t really something simple and may actually be valuable for this film.

This is the latest film from Russian director Alexei German Jr. German Jr. has had racclaim for his films in the past like 2005’s Garpastum which was nominated for the Golden Lion at the Venice Film Festival, 2008’s Paper Soldier which won the Silver Lion in Venice and 2015’s Under Electric Clouds. In this film he directed and co-wrote the script with Yuliya Tupikina, he delivers a piece that’s less of a film with a beginning, middle and end and more of a film that’s a portrait of a famed writer. It’s interesting they casted a Serbian actor, Milan Maric, to play Dovlatov. Maric has a reputation as a stage actor and this is Maric’s first film role. Maric does a very good job getting into the heart and soul of Dovlatov and he plays the part very well.

Dovlatov may not make sense to most people who see it at first. For those that are into writers and into the writing of Sergei Dovlatov, it’s a good look into the inside of the man and what made his writing.