By Jon The Blogcentric on 7 November 2019 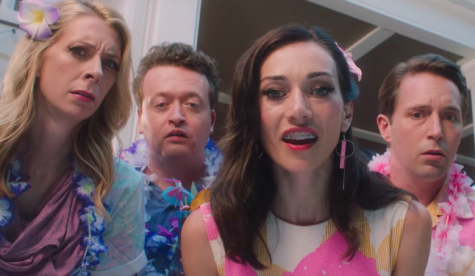 Greener Grass is a comedy about dimwitted parents and dimwitted couples in a dimwitted world.

After seeing a lot of dramas at the VIFF, especially heavy dramas, you can bet I’d be in the mood for some comedy. I got what I needed on the last day of the festival with Greener Grass. It’s not your typical comedy, and all the better for it.

The film opens at a neighborhood children’s soccer game. Jill Davies meets up with her best friend Lisa Wetbottom. Jill’s son Julian and Lisa’s son Bob are playing in the game. Lisa is complimenting Jill on her newborn baby daughter Madison. Jill decides that Lisa can have Madison, to Lisa’s complete surprise. Lisa accepts with no problem.

The two drive home in their golf carts, which all the resident of the town drive. Arriving home, Jill tells Nick the news, and he’s okay with it. He’s happy that they still have Julian, even though he is a nerd who’s awkward at sports, which Nick is uncomfortable with. Lisa introduces baby Madison to her husband Dennis and son Bob. The others happily welcome Madison and rename her Paige. Lisa is proud of how Bob is good at sports, but uncomfortable how Bob is not that good at school. On top of that, her husband Dennis is shorter and pudgier compared to taller, more athletic Nick. Later on, the two couples meet together at a barbecue. They end up kissing each others’ spouses. However they all laugh it up and switch it back to the right pairings.

They try to go about their lives and raising their families normally, or as normal as it gets in that town. Nick may be unhappy Julian is not the athletic hero he hoped for, but he’s okay since they now have better pool water. The water’s so good, he enjoys drinking it. Soon there is the news that the yoga instructor has been murdered. The whole town is in shock. Both Jill and Lisa are nervous. There’s even a message of terror sent to Lisa’s golf cart.

One day, Lisa notices a volleyball left by a playground. She uses it to make herself look like she’s pregnant. And everyone including Dennis buys this. This starts to upset Jill. Lisa first noticed how unhappy Jill was at a children’s bowling game. At Nick’s birthday party, Lisa thinks Jill is best with getting a divorce. Soon Julian distracts from the party and talks about how terrible his life is. When he appears to take a suicide plunge in the pool, he turns into a dog. Everyone is in shock.

Jill goes about bringing the dog-like Julian to school, much to Bob’s shock, and music practice. However Nick is blown away how good Julian is at sports. He’s like the son of Nick’s dreams now. Jill tells Nick he wants a divorce. Nick agrees and takes Julian with him. Jill is now childless and empty. Meanwhile a ‘pregnant’ Lisa is shocked to see Bob watching Kids With Knives on the television. The show immediately turns Bob into a self-loathing angst-ridden monster. However Lisa decides to ‘give birth’ to the volleyball, and all including Dennis accept it as the new addition to the family.

Jill can’t handle it. It’s not just being childless, but the stress knowing the murderer hasn’t been caught yet. Jill then confronts Lisa. She wants Madison/Paige back. Lisa is hurt. Paige is hers. Plus he reminds Jill that it makes her look like an ‘Indian giver’… excuse me… ‘Native American giver.’ Jill can’t take it anymore. That night, she rips out the wire from her braces, furiously drives past the intersection in her golf cart without being polite and drives off into another town. She sees a house with children. She knocks on the door and talks to the mother. The conversation is friendly until Jill asks for one of her children. The woman politely asks her to leave, but one of the girls is looking at Jill as she walks off. Jill has a new child!

Jill makes it back into town and just on the eve as the murderer of the yoga instructor has been caught. At a children’s soccer game, Jill’s child plays her first game. Everybody is happy to see Jill’s new child, including Lisa. She’s happy to see that Jill is finally happy again. Or is she?

Watching this comedy does leave you wondering what the heck is going on? The world these adults live in make no sense at all. Perhaps that may be its best quality. Instead of this being a world that makes perfect sense, it makes perfect nonsense. It’s a world where the adults wear sweet pastel colors, all wear braces on their top teeth and all drive around in gold carts. A world where they’re too polite to make the first move at a stop sign. A world where they make huge decisions without rational thought. A world where they can love as conditionally as they want. A world a parent can simply give their child to another family and the family’s good with it. A world with TV shows where cooking contestants are judged with someone else’s entry, and they accept without hesitation. A world where the kids have their own weird bizarre traits and can instantly either turn into a dog or act like they’re possessed by the devil. A world where a woman can fake a pregnancy with a basketball and everyone would believe it, and even treat the basketball like it’s their baby!

To sum it all up, it’s a world lacking of common sense, but full of smiley niceness, instant hurt and even insanity. I haven’t seen this much weirdness or bizarre human behavior since watching an episode of South Park. Though it’s not as warped as a South Park episode, it has a combined weirdness that has to both make sense and be consistent from start to finish. When you see a lot of the idiocies or the idiotic world created in the film, it does get you wondering. Will it hold through from start to its feature-length finish? Will the stupidity of the world be just as stupid at the end? Will the characters be just as dim-witted? To my surprise, the story did hold up. Instead of making perfect sense from start to finish, it made perfect nonsense. The world and the characters are just as idiotic at the end as they were at the beginning. The may have been some noticeable changes in the kids, but it ended with the same crazy energy.

This may be a comedy with nonsense from start to finish. However it does seem to resemble the envy people, parents, and couples. It’s a spoof on how we all think the grass is greener on the other side or how we keep up with the Joneses or how we try to chase something we can’t get. We can’t be happy with what we have. We have to think the other one’s better or try to one-up them. This film and the brace-cases in it spoofs it, and in bizarrely hilarious fashion.

This comedy belongs to Upright Citizens Brigade alumni Jocelyn DeBoer and Dawn Luebbe. They wrote it together, directed it together and play Jill and Lisa respectively. Actually this is a feature-length version of the short film Greener Grass they created four years earlier. They took a story full of a lot of comedic ridiculousness and insanity and had quite the job to make it work as a smooth film from beginning to end. To my surprise, it works. The story and its combination of idiocy and insanity works from beginning to end. It had all the making of a story that would go off-path, but it doesn’t. Whatever different elements of the story get added in as if it adds to the story instead of interferes with it.

One thing about the film is that it’s obvious Jocelyn and Dawn are aiming for shocks. This film is a film that has people with a lot of experience writing for and acting in comedies. Here you can tell with a lot of the incidents and lines, they are aiming not just to weird us out, but shock us along the way. It’s noticeable with a TV show called Kids With Knives, Nick drinking pool water, the other-spouse kiss (which is full of saliva) and Bob uttering angry lines like “I wish I was aborted!”

The supporting acting is also funny. The husbands are played by two Saturday Night Livers: SNL actor Beck Bennett plays Nick and SNL writer Neil Casey plays Dennis. They both do a good job of adding to the idiocy of the story and even show a good male side to the idiocy in the world of this film. The two boys in the film were also good, but Asher Miles Fallica was quite something as Bob. He goes from a kid that’s your typical kid to a boy who suddenly acts like he’s possessed by the devil after watching Kids With Knives. That’s crazy!

Greener Grass is a comedy about suburban families that mixes in stupid with bizarre and insanity and insecurities. It comes off as a winning feature-length comedy from start to finish.