Rust And Bone is a French film that’s not your typical artsy type of movie you’d associate with the term ‘French film’. Instead it’s an offbeat romance between two unlikely people. It has to be the year’s most unlikely romance story.

Ali is a Belgian man who’s had it rough. A young father of a five year-old boy names Sam, he’s dirt poor and often looks for food or steals it. He dreams of being a mixed martial arts fighter but has to earn a living as a security guard or bouncer and make whatever extra money he can from outdoor fringe fighting. He travels with Sam to Antibes, France living with his sister in hopes of a better life.

Stephanie is a killer whale trainer at the French resort town. She appears to have things better for her as her job is more stable and pays well but something is missing in her life. The fact that she goes to night clubs scantily dressed shows she’s missing something.

Ali and Stephanie first meet by accident. A brawl starts at the night club Ali is a bouncer at and Stephanie is hurt with a bloody nose. Ali offers to take her home and look after her for a short while. They trade phone numbers but they soon return to their regular lives. The next day Stephanie returns to her job at the oceanarium. The show seems business as usual until one of the orcas flies in and smashes the wooden office leaving Stephanie injured and bleeding. The wounds were so bad, both her legs were amputated.

Ali had all but ignored Stephanie until he received a call from her. They spend time together including times when he takes her swimming at the beach. During the time, she learns to get her self-confidence back. She’s able to swim, to stand and walk with prosthetics and even return to her job at the oceanarium.

Even though Ali helped her through it all, he is the one struggling. He has problems financially and still does his fighting outside. He has difficulties juggling his security work with his fighting. Sometimes he spends less time around Sam than he should. He constantly spends time with Stephanie and even has sex with her but still engages with women frequently even in front of Stephanie.

There would eventually have to be some message to send him to turn his life around but nothing does. Stephanie is tired of spending all this time with Ali despite his unwillingness to have a relationship. During his work as a security guard, he discovers people stealing from the store his sister works at. One of them is his sister and she gets fired. The sister throws him out of the house and it’s just up for him and Sam all alone. Things don’t change for him until a near-tragedy happens. It leads to changes for both but an ending that ended rather flat.

It’s hard to pinpoint what the actual theme of the movie is. If I could determine a theme, it would be about love turning your life around. I think the most unique thing about this film is that it makes a very good effort in creating a romance in the most unlikely of circumstances. A romance between a woman who just lost her legs and a man who is pursuing bloodsports doesn’t come across as your typical romance fair but the film was successful in achieving it. Part of it had to do with the screenplay co-written by director Jacques Audiard with Thomas Bidegain and in directing. It was most well-written to present a very real situation and real sets of events. Also part of the success of it was the acting from Marion Cotillard. She has one of her best acting performances in years. Her ability to act out the part very well and give depth to her character also adds to the film. Matthias Schoenarts didn’t give as stellar a performance as Ali but he did a good job for himself. Also a standout effort is the score from Alexandre Desplat. He keeps on churning out scores that fit movies well and he does it here again. Another standout effort of the film is the use of Katy Parry’s song Firework. The song is first used as part of the orca show but later becomes Stephanie’s personal anthem of self-recovery. Stephanie’s a firework.

Rust And Bone has already received good acclaim at film festivals. It was nominated for the Palme d’Or at the Cannes Film festival. It also won the Golden Swan for Best Film at the Cabourg Romantic Film Festival. It has made the circuit for many Canadian film festivals including Toronto. It’s expected to be released in North American theatres on Novermber 23rd in limited release.

Rust And Bone is not your typical romantic movie but it’s a very deep story about people with deep emotions that were meant to be together. Despite its imperfections and lack of spectacle, it’s still worth seeing. You’d be surprised how good it is. 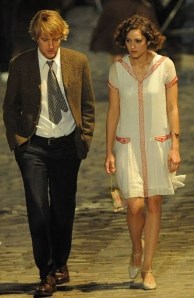 Midnight In Paris turned out to be one of the most unlikely sleeper hits of the summer. Little was expected of it: Owen Wilson being the biggest name, a romance featuring characters older than the 20’s, a Paris setting and a trip back to the past. Somehow it was able to capture people’s imaginations and make moviegoers want to see it.

The story is about Gil: a Hollywood screenwriter who’s successful but easily distracted. He’s engaged to Inez, a daughter of wealthy conservative parents. While the four are vacationing in Paris, Gil is struggling to finish his first novel about a man working in a nostalgia shop; a novel for which he plans to give up his scriptwriting career and move to Paris for inspiration. This does not sit very well with Inez’s parents as they don’t favor the arts or Paris nor does it sit well with Inez herself as she intends to live in Malibu. Meanwhile Inez’s friend Paul who appears to know a lot of the artistic greats makes things more complicated as Gil finds him insufferable and even phony.

After a wine tasking one night, Gil is drunk and alone outside the hotel. At midnight, Gil comes across a coach leading a group to a secret place. Gil joins the group and the people appear to be celebrating 1920’s couture. Later we see that the coach leads to a place where the 1920’s come alive with the Cole Porter, Josephine Baker, Ernest Hemingway, F. Scott Fitzgerald and wife Zelda. He even meets Gertrude Stein and offers her to look over his novel. One catch we learn as he returns to the hotel, he’s back in the present.

Gil goes to return the next night novel in hand and offers to bring Inez with him but she’s annoyed with what he says and returns to the hotel. The coach returns at midnight and this time Ernest Hemingway is inside. He gives Gertrude his novel and she introduces him to Picasso. Gil encounters Picasso’s mistress Adrianna whom he has become attracted to. The following day Paul  shows Gil and Inez Picasso’s painting of Adrianna at a museum and tells his story about it. Gil contradicts with the truth he just saw the other night, only to annoy both Paul and Inez.

Gil visits the past more often for inspiration for his novel which annoys Inez. Her father even hires a private investigator on him, only to be lead to the Versailles during the era of Louis XIV and never to be found again. Gil spends more time with Adrianna, who leaves Picasso for Hemingway. This confuses Gil as he feels he’s falling in love with her. Meanwhile he meets with surrealists like Salvador Dali, Man Ray and Luis Bunuel who see nothing strange about him coming from the future. Gil goes furniture shopping with Inez but comes across and an antiques dealer who’s selling Adrianna’s diary. He also learns from a conversation with the antiques dealer herself that she also has the same fondness for the 20’s Gil has. Later a guide from the Rodin Museum translates Adrianna’s diary and he learns she’s in love with him. Gil returns to the past and confesses his love to Adrianna. A coach leading them to the days of the Belle Epoque drives up and Adrianna opts to go in, talking of how she longs of the days of the Belle Epoque and how the 1920’s are so imaginative. It there that Gil learns about the illusionate lure of nostalgia and learns to accept the present for what it is. In the end, the romantic triangles between all involved take a surprising turn and Gil makes some surprising decisions.

I don’t think the movie is stressing too many points but rather telling an amusing love story where artistic inspiration and one’s passion are the top themes. It does pay an admiration for the writers and thinkers in the past but it reminds us to admire their influences rather than dwell back to their time.

Another theme that’s common in Woody Allen’s movies is about artists and their inspirations. It shows how a top Hollywood writer feels that burning desire to create a novel that no Hollywood millions can take the place of. Allen puts in many legendary artists, writers and filmmakers—including some from an American expatriate group in Paris at that time–who received their inspiration in Paris to make his point. It also reflects on Allen’s feelings of conservatism being stuffy, especially with the Tea Partiers. Interesting how Gil is an artist mesmerized by legends of the past while Inez’ father admires a political party known for its past thinking.

In terms of the movie’s acting, this is the best acting I’ve seen from Owen Wilson. He seems in these past few years to be leaving his past Slacker Pack schtick behind and is now doing more sensible roles. This is an excellent move for Wilson. Here he plays a man who’s smart but easily distracted. Very good job. The supporting roles were also excellent, especially the character acting. Most of the characters of people from the past are so well-acted, you easily forget who the actor is. It took me a while to recognize Adrien Brody as Salvador Dali, Marion Cotillard as Adrianna and Tom Hiddleston as F. Scott Fitzgerald. The most recognizable was Kathy Bates as Gertrude Stein. Nevertheless her acting was still top quality.

The best effort has to come from the directing and writing from Woody Allen. I will admit that Woody Allen’s humor and comedies are not as fresh as it was during the 70’s and Midnight isn’t that different. If there’s one thing I like, it’s that Woody Allen is able to keep quality and good effort in comedy. While most comedic writers rely on cheap shots, one-liners and slapstick to make hit comedies, Allen keeps the intelligence in his storylines and presents comedies with amusing situations, full characters and an ending that differs from your typical Hollywood endings. Here we have characters that make you laugh and think at the same time. Here we have a return back to the past that fits the story well. Here we have a romantic comedy that doesn’t end the way your typical Hollywood romantic comedy ends. in terms of box office, Midnight is Woody’s highest-grossing film in North America ever. Impressive.

Midnight In Paris is not a comedy for everyone. I don’t think a trip into the past in Paris at the stroke of midnight will draw everyone. Nevertheless it is a refreshing break from your typical predictable, formulaic Hollywood fare and will impress whoever is willing to view it.