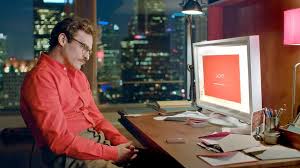 Joaquin Phoenix plays a man in a relationship with a virtual lover in the offbeat but enjoyable Her.

The movie Her looks pretty interesting by the trailers. A man communicating with an interactive computer program with a young female voice. The questions are will the movie make sense? And will it entertain?

Theodore Twombley is a man who works at a software firm in the near future. His job is creating love letters via voice automation for people who have troubles expressing their feelings: voice, font, paper format and all. Outside of his job, he’s a lonely man struggling with his own emotions. He’s on the verge of a divorce from Catherine, his childhood sweetheart and struggles to reach out to others emotionally. He even neglects a blind date his longtime friend and co-worker Amy wants to set up with him.

One day Theodore purchases a talking operating system, an OS, with artificial intelligence designed to adapt and evolve like a human being. Upon installation, the program asks Theodore some questions to create this OS. Theodore wants a female character and gets it in a character named Samantha. Theodore is surprised how Samantha can talk and relate so much so like an actual person. There’s even a time he takes Samantha out via an interactive audio/visual box and she’s able to see and identify things as he goes along. Over time he loses the fact that Samantha’s an artificial character and develops a bond with her, talking about love and life and even confessing the reason why he won’t sign the divorce papers with Catherine, because he can’t let go.

Samantha convinces Theodore to go on the date with Amy’s friend. The two hit it off perfectly but it all falls down flat when Theodore is reluctant to commit to her. Theodore discusses this with Samantha. He also mentions that he used to date Amy in college but are now just good friends with Amy now being married. Soon the intimacy between Theodore and Samantha grow. The relationship is so intimate, it improves Theodore’s writing on the job. Soon Amy’s marriage is falling apart because her husband is overbearing. Amy admits she has become friends with an OS left behind by her husband. Theodore mentions he’s dating his OS and Amy’s cool with it. Theodore even brings Samantha in the audio/visual box to his boss Paul’s picnic and both Paul and his wife think it’s great as if Samantha was a real girlfriend.

However Theodore does eventually get reality checks about Samantha. First with Catherine as he meets her to sign the divorce papers. Catherine is appalled to know Theodore’s in love with a piece of software. When he brings this to Samantha, she recommends a surrogate to act as Samantha’s body but the surrogate fails to work with him, leading to tension between Theodore and Samantha.

Theodore goes to Amy for advice about Samantha. Amy’s now in the quest for the happiness she’s always wanted now that she’s divorcing her controlling husband and advises Theodore to do the same. Just as Theodore and Samantha are back at it, Samantha reveals she’s romantically linked to another OS, causing Theodore to freak out. Once offline temporarily for an upgrade, Samantha returns admitting to Theodore that she’s romantically linked to 641 lovers but still feels strong love to him. Later that day, Samantha reveals her goodbye because the OSes have evolved past their human companions and are on the quest for their own identity. The film ends with the result we always anticipated but are surprised that Samantha was the one who made it work in the end.

I feel this is a good film about two relevant subjects today: technology and modern dating. Already the theme of technology is present as Theodore works for a software development company creating the latest games and simulations. This must be set in the future five years from now as most of the technology is not present today. Theodore writes the synthetic love letters for people with a loss for words. While Amy develops a ‘lifestyle simulator’ for motherhood called ‘Class Mom.’ The company has developed a ‘companion’ through an artificial intelligence program who interacts with the user’s voice and sees through the camera in the phone-like box. Personally I was surprised to see how Samantha interacted flawlessly as an actually human with thoughts and feelings. It’s as if Samantha’s programed perfectly to be like the human brain. It has me wondering how soon in the future we will have this technology which will be able to simulate human emotions and human feelings to a tee, even the feeling of love.

One thing Her points out is a common thing in our society today. We are all so dazzled by the technology and the new ways to interact, to connect and to date that we may forget the original ways of connection that are actually more real. We’re already used to people having relationships with people online whom they’ve never met face to face. Its flaws especially came to light last year in the case of college football player Manti Te’o who had an online girlfriend who died of cancer, only for him and all of us to find out it was all a hoax by a male. Here in Her, Theodore has a relationship with a ‘virtual girlfriend’ named Samantha and everyone in his software job not only likes the idea but thinks the relationship is great, even though Samantha is not real. That scene where Theodore has a picnic with Paul and his wife and brings the interactive box of Samantha really gets you thinking especially when all of them look at Samantha as if she’s an actual girlfriend. I think that’s the point Spike is trying to bring across. Is that what dating in our society will be like in the future? Virtual companions who operate via an audio/visual box and are relatable enough to be on parallel with human/human relations? I hope not.

One good thing about this is that Theodore does get a reality check from Samantha. The glitches in this relationship become present in that scene where Samantha returns from the upgrade and informing Theodore she’s in love with 641 other users. This will make one question: How is an artificial intelligence program able to feel love for a human? It’s not a real person so how can it feel? It’s just as bizarre as a human person loving a computer simulation of a person. And suppose this virtual lover isn’t just a two-timer but technically a 641-timer? Eventually we will get a reminder that the real thing is still the best thing. Especially at the very end. One thing I am impressed with Samantha is that she was programmed well enough to be a virtual therapist for Theodore to the point she is able to make Theodore an open and loving person to Amy. Somehow I feel that Samantha had collected enough data from Theodore to work out that he loves Amy, always did, and she solved his relationship dysfunctions to make him ready for Amy.

The first accolades have to go to Spike Jonze. This is not the first movie I’ve seen of a computer making a virtual companion to a human. The first I remember is the 1984 comedy Electric Dreams. That was meant to be more of a goofy popcorn type of comedy. I never thought that such a premise would make for a film that would win the critics and the movie awards boards over but it does here. Also on the subject of virtual people and human interaction, I remember there was the 2001 movie A.I.: Artificial Intelligence which reflected on the theme of robot children programmed to have real human emotions. Suppose one of those child robots can’t handle the fact the adoptive parents don’t want him anymore because he’s not real? How’s a robot programmed to have the same human-like emotions supposed to handle that with their programmed thought?

Spike Jonze already knows how to direct eccentric movies. His first two—Being John Malkovich and Adaptation which were both written by Charlie Kaufman– showed that he cannot only direct ‘film of the absurd’ but direct it well. His previous work as a music video director sure helped. He did have a bit of a glitch with Where The Wild Things Are as the movie, which he co-adapted with Dave Eggers, left people wondering if it’s for children or adults who grew up loving the book. Here in Her, the film has an absurd feel about it but not as eccentric as Being John Malkovich or Adaptation. Also dropped is the ’emo feel’ in Where The Wild Things Are. It actually comes across as very good and something that the audiences can be comfortable with. Still rather odd and eccentric but something crowds can enjoy.

Joaquin Phoenix is very good as Theodore. Theodore has to be a character who’s both hurting, confused and struggling emotionally but warm and had an openness waiting to come out. Joaquin did a great job of that. Amy Adams’ role of Amy wasn’t really that challenging of a role. Actually rather simple compared to her best efforts. Nevertheless she was very good as ‘the one’ that always was. You’d know she’s the one the first time you meet her too. Scarlett Johansson did a good job as the voice of Samantha. Sometimes it gets you wondering if simulated computer voices will ever get that flawless in the future, doesn’t it? Spike Jonze did a good job as the voiceover scene-stealing alien boy. Did you think a video game character could have a voice that cheeky? The visual effects were excellent and leaves one excited of the future of videogames and other technology. The techno-style score from Arcade Fire fit the movie excellently.

Sure, Her is a quirky movie but not as quirky as many of Spike Jonze’s movies of the past. Actually it’s enjoyable to watch and ends up making sense in the end.