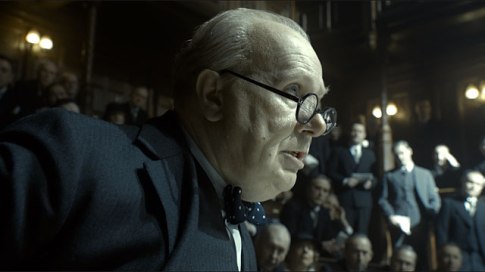 Darkest Hour is the story of Winston Churchill (played by Gary Oldman) and his struggle to convince the people of the UK that fighting Hitler is the right thing to do.

Usually around the latter part of the year, historical dramas are common for release. Darkest Hour is one, focusing on Winston Churchill and World War II. The question is does it fare well as a film? And does it have relevance to the present?

The film is set in May 1940. World War II had just begun eight months ago with the fall of Poland. France is next. The film hits hard in the UK as they fear war is looming. It hits so hard, Prime Minister Neville Chamberlain is pressured by the opposing Labour Party to resign for not doing enough. Neville needs to find a successor, but his first choice, Lord Halifax, declines. He goes for his second choice: Winston Churchill.

Now Winston Churchill was seen as a bad choice as the successor to Chamberlain. He has a bad record with his roles in the Admiralty, the Gallipolli Campaign During The First World War, his views on India, and his support for Edward VIII during the Abdication Crisis. Even his own personal manner is of question as he is oafish and has a reputation for infidelity and a quick temper. He’s even temperamental to his new secretary when she mishears him, but his wife Clementine gets him to come to his senses.

King George VI encourages Churchill to form a coalition government along with Halifax and Chamberlain. Churchill’s first response to Hitler’s invasion of France is fast and immediate: no surrender to Hitler and fight if we have to. He made it clear on May 13 1940 in his ‘blood, toil, tears, and sweat’ speech.

The speech is not well-received by the Parliament. They think he’s delusional. The Nazi army is too powerful. It even gets flack from King George VI. The French Prime Minister thinks he’s delusional for not admitting the Allies lost in the Battle Of France. People in his party offer Churchill to accept Hitler’s offer to negotiate for a peaceful end to the War, but Churchill declines. He does not trust Hitler.

The situation gets frustrating to the point both Halifax and Chamberlain are looking to use the Italian Ambassador as a route to negotiate peace with Hitler. Both plan to resign from the Government if Churchill doesn’t comply, hoping to cause a ‘vote of non-confidence’ to allow Halifax to become Prime Minister. Meanwhile Churchill is trying to seek support from the US with President Franklin Roosevelt, but he declines as the US signed an international agreement preventing military action in Europe years ago.

However war is pressing. The UK find themselves in battles in Dunkirk and Calais. Churchill, against the wishes of the War Brigade, orders a 30th Infantry Brigade in Calais to organize a suicide attack to distract the Nazis allowing the soldiers in Dunkirk to evacuate.

The defeat at Calais causes the War Cabinet to want to negotiate with Germany. However as Churchill is about to make his way to Parliament, he receives support from his wife, support from King George VI fearing exile if Germany wins, and support from a group of citizens in the London Underground he takes to parliament. Even members of the Outer Cabinet and other members of Parliament give him their support. News comes that the evacuation in Dunkirk ‘Operation Dynamo’ is successful. At parliament in front of cabinet members and members of the War Cabinet, Churchill delivers his speech of ‘we shall fight on the beaches’ to the support and applause of all, even Halifax and Chamberlain.

Lately there have been a lot of biographical films that don’t thoroughly focus on the person’s life, but instead focuses on the one moment that defined them as a person. We saw in Lincoln how getting the Emancipation Proclamation made constitutional and the political fight to get it done is what defined Abraham Lincoln the most. We saw in Capote that it was the making of In Cold Blood that would become Truman Capote’s biggest legacy of a writer, and would eventually lead to his downfall. Here we see the period of one month how Churchill couldn’t just simply say that Hitler needed to be fought, but had to convince the people and especially the parliament that fighting him is the right thing.

Such a situation in our world history is not uncommon. If you remember Lincoln, you will remember that Abraham Lincoln had to do political campaigning in order to get the Emancipation Proclamation made constitutional. The Proclamation itself was up for vote in the House. Just a reminder that even the most righteous political laws still have to go through the same political processes. Even for powerful speeches, it’s about saying it at the right time and the results to follow. We may remember how back in 1987, Ronald Reagan stood at the Berlin Wall and said, “Mr. Gorbachev, tear down this wall!” This is something JFK could have told Nikita Khruschev to do, or Nixon telling Brezhnev to do, or even Reagan himself telling Brezhnev or Andropov to do, but it would not result. The Soviet leaders were just that stubborn and dead-set on their rigid ways and dismiss what the POTUSes said at hot air. But Reagan said that just during a time when it appeared the Cold War appeared to be thawing and Gorbachev was the first Soviet leader to appear cooperative with the US, but not without its friction. That sentence is memorable because the Wall did come down in a matter of two years.

Here in Darkest Hour, we see another example of how words that are true in conviction and the right thing to say still faced political opposition. When Churchill was placed as Prime Minister, he didn’t waste time in speaking his opposition to Hitler and that the UK should not surrender. However those in the office all thought his words were deluded. They knew of the Nazi army and the invasions it’s caused already in less than a year. Hitler and the Nazi army were just that menacing. They also saw the efforts, or lack thereof, from the previous Prime Minister fail. On top of that, France had just fallen to the Nazis. They were simply afraid.

It was easy for people to think of Churchill’s words as deluded. He already had a reputation in the British parliament of being quite the buffoon. In fact the opening scene of the film shows his buffoonish nature. Churchill knew in his heart that the UK had to fight the Nazis, but he had to convince the British parliament. And he had to do it fast. Over time, more tyranny from the Nazis occurred and the UK was feeling the heat. Churchill was denied support from US president Franklin Roosevelt because of an agreement signed the year before. That negotiation for peace from the Germans would seem like something one would cave into and it was easy to see why the British politicians thought it right, even though we all know it to be wrong.

The last fifteen minutes of the film just as Churchill is about to deliver the ‘fight on the beaches’ is a very powerful scene as it shows how Churchill is able to win support in his stance from his wife, the King of England and even people on the subway as he makes his way to parliament. I don’t know if that really happened to Churchill in real life, but that subway scene is a powerful scene. Sometimes I think that scene is telling me that all too often, the common person has a better sense of what’s right than the people in power.

For the most part, the film is as much of a biographical drama as it is an historic drama. The film is very much about the speeches of Churchill and the start of the mission of British forces to fight Nazi Germany. The film not only focuses on Churchill’s quest to fight in the war, but his quest to convince the people in political power to believe him. It focuses on Churchill as a man of great conviction, but also a man of noticeable flaws. That had a lot to do with why people first thought he was a madman or deluded. It reminds you that a head of state can sometimes be reduced to a pawn in their political building. The film does remind people of the common saying that: ‘What’s right isn’t always what’s popular and what’s popular isn’t always what’s right.” Churchill knew in his heart he was right, but he had to fight to make it believed by all. It was necessary as the Battle of Dunkirk would soon happen

It’s interesting how Darkest Hour is release in the same year Dunkirk is. I find it very appropriate because it was actually just right after the Battle Of Dunkirk and the subsequent evacuation that Churchill delivered his speech of “We shall fight on the beaches.” The fight on the beaches of Dunkirk and the evacuation and rescue mission was the first significant sign of what the UK needed to do to win against the Nazis. Churchill was there to pay all respect to those heroes, the survivors and fatalities, who were a part of it.

Director Joe Wright and writer Anthony McCarten deliver a very good historical story. However there are times when it does feel like it’s completely restricted to being about Winston Churchill. I understand what the story is all about, but they could have explored some additional angles to go with it. Without a doubt, the film is owned by Gary Oldman. He does an excellent job of delivering a performance of Winston Churchill. His depiction of Churchill first appears cartoonish at the beginning, but the depth and dimension develops over the film and he really comes out shining.

Although the film is dominated by the portrayal of Winston Churchill, there are supporting performances from Kristin Scott Thomas as Clementine Churchill and Lily James as Elizabeth Layton that are able to steal the moment. Also capturing the moment are Ben Mendelsohn as King George who slowly supports Churchill and Ronald Pickup as Neville Chamberlain who supports Churchill despite his own political downfall. The film also does an excellent job in the technical aspects such as the Production Design to reconstruct parliament, costuming from Jacqueline Durran and the makeup and hairstylists to fit the era, the cinematography from Bruno Delbonnel and the musical score from Dario Marianelli which capture the intensity and triumphs of the moments.

Darkest Hour is more than just an historical drama or biographical drama. It’s an excellent film about standing by your convictions without crossing the line of being preachy.