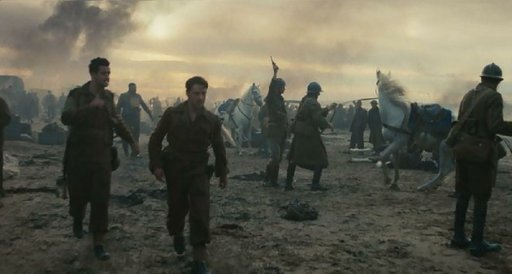 Dunkirk is the telling of one of the most historic battles of World War II on land, sea and air.

The film does share some minor similarities with Titanic. Firstly, it’s a film that features a lot of action as part of the story. This being about the Battle of Dunkirk and the evacuation would be a film that would feature a lot of action and a lot of intense drama. Also like Titanic, it features some fictional stories or story lines inside a moment of history. Like Titanic, they also include historical figures who were part of the Battle, however even there the depictions of incidents do stray away from what really happened and go for the story.

Basically film is so loose, I’m okay with seeing a fictional depiction of moments in history as long as I’m made aware of its fiction. This film is a very good, very complex story of the Evacuation of Dunkirk. We should remember that the Battle Of Dunkirk was very important in the history of World War II. It was the first sign to the Allied forces that Hitler and the Nazi army had a vulnerable side and that the Nazis could be the losing side of World War II, despite how menacing Hitler and the German forces appeared. The rescue mission that accompanied it is a sign of the heroism as 300,000 Allied soldiers survived. The story focuses on three different aspects of the Battle– land, sea and air– and captures in the time frame of a week about what the heat of the moment must have been like for soldiers, civilians, casualties and leaders. The stories of what happened during the Battle of Dunkirk can be told through many different aspects and from many different viewpoints. This film succeeds in capturing the moments as the tension begins, the battles ensue, the devastation is done, the rescue has its own friction and the eventual triumph happens. It allows the viewer to relive the moment of all that happened. I even remember for a brief period of time that I thought the Allied soldiers would lose. Of course I learned in history that they did not lose, but the film succeeded in making me forget it sense that they might lose. That’s the magic of film.

The film is not just about giving a moment in history three different sub-plots. The film also captures the human element of the battle for those part of it. Although the characters are fictitious, they are based on real people from the Battle Of Dunkirk. First there’s young Tommy who goes from being the sole survivor of a battle to joining two other Allied survivors in a new fight for survival and shelter. There are the Dawsons who find themselves rescuing a shell-shocked soldier and seeing their friend George die because of his violent reactions. There’s the RAF pilot who goes from one one of the following pilot to leader of the battle as his leader is shot down. All three stories may not be exact true stories, but they capture the human side of the battle. In all three scenarios, it’s the story about surviving right as they’re witnessing death and destruction around them. It’s likely that what we see in the stories of Dunkirk are similar stories that thousands faced during the very battle. It’s even a reminder of why we should look at those who were part of the Battle, both soldiers and civilian participants, as heroes.

This film is arguably writer/director Christopher Nolan’s best film to date. He came across the idea of doing this film in the 1990’s as he and his wife sailed across the English Channel along the same path of the Dunkirk evacuation. This was no easy film to make. He had his concept of three different scenarios of the Battle Of Dunkirk. He not only had to give the human element to his stories, but also include the action of the battles and the intensity of the various moments. He did an excellent job of constructing such a story that was not only well-done and well-pieced, but was also able to engage the audience as well.

As for the acting, there was not a single stand-out role. Nolan even admitted he didn’t want to put emphasis on the characters for who they are, but instead on will they survive this. Even the role of Tommy was kept very minimal, but Fionn Whitehead did a very good job in his performance as the young soldier struggling to survive. I believe the best acting performance came from Mark Rylance as Peter the mariner who’s caught in the intense situation, but tries to remain cool and calm. Another standout is Tom Hardy as the Spitfire pilot who’s thrown into the leadership role. I know some that are loyal to One Direction may take interest in this because of the appearance of Harry Styles. His performance is good, but his role is limited.

The film needed to have top technical efforts in order to be successful and it had some of the best of the year. There was cinematographer Hoyte Van Hoytema who delivered excellent camera angles,editor Lee Smith who was able to piece the three stories together very well, production designers Nathan Crowley and Gary Fettis who did an excellent job of constructing seaside Europe in 1940, composer Hans Zimmer who delivered yet another score that fits the movie to a tee, and the visual effects team for recreating the battles and attacks that occurred.

On an Oscars note, the craziest thing about the months before December is that one does not know which films will have enough juice to qualify for a Best Picture nomination. It’s become very obvious in the last few decades that the big studios save the release for their ‘Oscar bait’ movies for December because they know how things work. Most of the time, a lot of excellent movies that get released in the summer or earlier often miss getting nominated for Best Picture. The year when it was best made obvious was 2002 when all five Best Picture nominees were films either released in December or given wide release in the New Year. Winning an Oscar or even getting nominated is as much about studios doing a strategy or ‘playing the game’ as it is about doing an excellent effort. Don’t forget this is showbiz. Even awards of merit like the Oscars, guild awards or even critics circle awards need to be campaigned and marketed for the win.

Dunkirk is not just a simple re-enactment of one of the first major battles of World War II. It delivers in the human side of the story as it delivers in the action of the battles. This explains why while the summer movie season of 2017 was known for being lackluster, this movie was a top highlight. And a top-quality highlight too.