Posted on 2 March 2018 by Jon The Blogcentric 2 comments 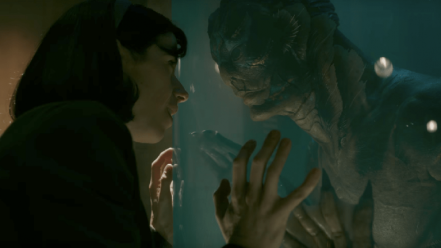 Sally Hawkins (left) plays a mute who develops a bond with a sea creature (played by Doug Jones) in The Shape Of Water.

At first one would think that The Shape Of Water is another science fiction movie with a bizarre story, but it turns out to be a story that’s a lot more than that.

Eliza Esposito is a mute woman in Baltimore in 1962. Orphaned at a young age, she lives in an apartment just above a movie theatre and works as a janitor in a secret government laboratory. She only has two friends. The first is Giles: a gay advertising artist who lives next door to her. They often eat pie and watch entertainment together. The second is Zelda: an African American woman she communicates with in sign language. It’s through Zelda she can tell her biggest secrets.

One day, a creature is brought to the laboratory. It’s a sea creature from South America captured by Colonel Richard Strickland. Right when she sees the creature, she notices something about him. That the creature has some human-like traits. Both Zelda and Eliza sense something wrong with Colonel Strickland as he comes across in a gruff manner. They also notice he brought a cattle prod that has blood on it. Eliza notices the blood travels in a unique pattern.

Later Strickland is attacked by the creature, bleeding badly and lost two of his fingers which get reattached shortly after. As Strickland is being tended to, Eliza wonders who is this creature and what do they want from him? Eliza soon develops a bond with the creature and discovers it’s a humanoid amphibian. She gives him eggs to eat, music to listen to, and communicates with him through sign language.

There are different plans people have for this creature. General Hoyt wants Strickland to dissect it for the possibility of an advantage in the Space Race. Scientist Robert Hoffstetler, who is secretly a Soviet spy, tries to convince his masters to keep the creature alive for scientific study. The Soviet spymasters disagree and want him euthanized.

When Eliza learns of Hoyt and Strickland’s plans for the creature, she tried to persuade Giles to assist, but he rejects at first. It’s after a failed attempt at hitting on the pie man that he agrees to comply. Zelda is also opposed to it at first, fearing for but her job and Eliza’s, but she agrees to help. Hoffstetler tells Eliza he’s aware of her plan and is willing to help.

The plan is to help the creature escape where no one can see. Zelda keeps a close eye on the coast. Hoffstetler helps in the distracting of the surveillance cameras just as Zelda makes the adjustment, and even has a bomb on the power base set to explode at the right minute. Giles rents a truck and paints it to look like the laundry pick-up truck. Eliza is able to get the creature into the laundry bin. Just as it appears that Giles is about to get stopped by security, Hoffstetler injects sleeping medicine into the guard’s neck. The pick-up and escape is successful, but not without smashing Strickland’s new blue Cadillac!

Eliza keeps the creature in her apartment. She keeps it in her bathtub which she mixes with salt and plants. She plans to release it into a canal in a few days one it opens to the ocean. She’s well aware that Strickland still wants the creature. Strickland even meets with Eliza and Zelda to interrogate, but both are able to keep the truth hidden from him.

Back at the apartment, the creature leaves Eliza’s suite and visits Giles’ suite. He takes an interest in his drawings and the television, and thinks one of his cats is food! The creature runs off again just after he slashes Giles’ arm. Eliza goes searching for the creature and finds him in the movie theatre staring at the screen. The relationship between Eliza and the creature grows. She becomes more than just his protector, but his lover. She herself can even acquire the ability to make shapes with water. She even tells all to Zelda, to her surprise. The creature even helps Giles heal from his wounds. Giles eventually opens up to him just after. Eliza gets sexually involved with the creature even to the point she tries to flood her whole bathroom to have underwater sex! Much to the disappointment of the cinema owner down below!

Meanwhile Hoffsteler meets with his handlers and is shot, but not until Strickland intervenes and shoots the handlers dead. He forces Hoffsteler to reveal who took the creature. Strickland then goes to Zelda’s house. To the shock of her and her husband, Strickland arrives and threatens Zelda to reveal Eliza has been keeping the creature. Zelda then telephones Eliza and Giles warning them of Strickland. The time to take the creature to the canal is now. The creature wants Eliza to come with him, but Eliza insists it’s better for him to go alone. The scene ends on a dramatic note and an ending that’s unexpected, but is the right ending for the film.

This does make for a bizarre story of a recently-discovered sea creature and a woman’s romantic connection to the creature. We’ve seen Beauty-And-The-Beast type of movies before like King Kong or Creature Of The Black Lagoon. The funny thing about this is that it actually succeeds as a romance. The first thing that makes it work is that there’s a real connection between the woman and the creature. Rightly so because Eliza is the first to connect with the creature and connects with him in the biggest way. All Eliza had before was her job and the friendships with Giles and Zelda. Here she finds a being that she not only connects with, but becomes her soul mate. The one that completes her. They were two lonely people who were united by fate of the most impossible kind. You could understand why the ending made sense. It was through the magic of the creature’s healing that she is able to live in his world and his world only.

The most interesting thing of the film is its connection of the various arts. It’s more than just nostalgia. It reminds you of the charm and the feel of such entertainment back then that most people overlook. However it’s through those various arts that the sea creature gets a sense of human vitality and even embraces it into his own life. The art he comes across helps him communicate in the human world and gives him his human-like qualities. From the music Eliza plays to the images on the movie screen to even watching a hokey episode of Mr. Ed on Giles’ television, the entertainment is his connection to his human traits. It even helps him experience his feelings of love which he has for Eliza. You could understand why that one scene where Eliza was not a mute –that musical number where she dances with the creature– makes sense. It’s through art that she’s able to express her love for the creature: the one being that doesn’t make her feel like an outsider at all.

The creature doesn’t just affect the lives of Eliza, but of the two closest to her too. Soon after Giles has a change of heart and helps the creature’s escape, Giles opens up to the creature and soon makes him a part of his own art. As Zelda helps the creature escape, she too develops an inner strength in her and is able to stand up for herself to her husband. It’s something to think about. The three main characters are all misfits in 1962 Baltimore. Eliza is a mute, Giles is gay, and Zelda is black. However it’s through this creature that Eliza finds a soul mate, Giles finds a purpose and Zelda finds an inner strength.

I give top credit to Gullermo del Toro. The story he directed and co-wrote with Vanessa Taylor is comical and had a lot of good drama, but it’s the human element that shines in the story line. Del Toro would admit in an interview that this is inspired by The Creature From The Black Lagoon and always dreamt of seeing Gill-Man succeed in the romance to Kay Lawrence. I can sometimes see hints of Pan’s Labyrinth in the story. It’s interesting how he creates this story that romanticizes the entertainment of the time as well as reminds us of the hysteria of Communism at the time too, as well as the racism. All of this makes the charm of the film.

The acting is the biggest strength of the film. The best comes from Sally Hawkins in playing a mute who best communicates to the sea creature with her feelings and with the power of art. Richard Jenkins is also excellent as Eliza’s loner friend who finds a new purpose in life through the creature. Another excellent performance is from Octavia Spencer playing the friend closest to her side. Also very good acting from Michael Shannon. You often wonder if Strickland is heartless or just plain under the thumb of the Colonel. You know he’s troubled when you see the amount of pills he takes. Excellent work for Doug Jones. One again, he does excellent work as the creature in Guillermo del Toro’s movies. Most of you remember him as the Faun in Pan’s Labyrinth. You could say Doug Jones is to del Toro’s movies what Andy Serkis is to Lord Of The Rings’ Gollum.

The film has a lot of excellent technical aspects too. There’s the costuming and make-up team that made up the costume of the creature, as well as the visual effects team that made the ‘blue effect’ of the creature’s skin. There’s the production design team that made an excellent set that dates back to the early 1960’s to a tee, even with the movie theatre. There’s Luis Sequeira that designed the right costumes and outfits for the actors as well. Finally, there’s the mix of the music of the time mixed with the imaginative score of Alexandre Desplat. Desplat knows how to compose for a movie.

The Shape Of Water is more than just a creature-and-woman romance we’re familiar with. It succeeds in having the feel of an actual romance and successfully convey the feelings of love. In the end, the romance looks so right! That’s its magic.