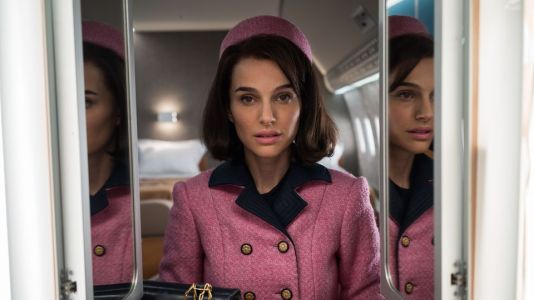 Natalie Portman showcases a deep personal angle of Jackie Kennedy in Jackie most of us never saw.

At first I wasn’t too interested in seeing Jackie. I mean there have already been enough made-for-TV movies of JFK and Jackie Kennedy. The film would not only have to justify being made but also its big-screen release.

The film begins with a journalist interviewing Jackie Kennedy in her home just days after JFK’s assassination. It’s like one minute she’s the First Lady living in the White House and the next, she’s a young widowed mother living in a private home miles away. The journalist begins with small talk but the questions move to the assassination and the aftermath.

It is from that point the film flashes back to various moments. Moments when Jackie and John attended Camelot: a musical JFK was captivated by. Moments like Jackie right after the shooting cleaning the blood off her clothes. Moments like being comforted by Bobby Kennedy, Lyndon and Lady Bird Johnson, and White House social secretary Nancy Tuckerman whom Jackie would later confide in. Moments like making funeral plans. Moments like her dealing with the priest and her questioning her faith more than ever.

Now keep in mind when this film came out, I was not too interested in seeing it. I mean the role of Jackie Kennedy has been included in too many made-for-TV film. When I saw this film about to be released, I was thinking “This film had better justify its big screen format.” This is not just simply a film that’s a biography. This film focuses on Jackie not even during ten days of her life. This is one of the most critical times of her life as she went from being Jackie Kennedy to a widow in an instant. Many of us know a lot of Jackie Kennedy, but this film presents an angle of Jackie Kennedy few of us knew. The smile and happy charm of Jackie Kennedy we are all familiar with is now replaced with a Jackie Kennedy that is hurting inside. She feels like she’s nothing without JFK. Her faith both in God and in the magic of Camelot has been challenged to more than what she can handle. She even feels like she’s worthless as a mother to her children. That was Jackie right after JFK died. That was Jackie those many days later dealing with the journalist.

We also see another angle to Jackie. This film goes through scenes happening in various moments of time in Jackie’s life. We see some scenes when JFK was still alive but most scenes are various times after his assassination. With those scenes, we see the different aspect of Jackie few knew. We have always known Jackie Kennedy the First Lady to be charming, charismatic, sweet and outgoing. Here in the film, we notice that Jackie is not the prissy, naive Jackie as most of us thought she was. She knew of her husband’s infidelity. She knew of Wanted For Treason posters published by dissenters days before his assassination. She did have concern about tax dollar use for her husband’s funeral. She even considered her publicity an interference: “I never wanted fame. I just became a Kennedy.” She even questioned her faith with the priest. These are all aspects most never knew of Jackie Kennedy. However the film also shows Jackie as a person who doesn’t lose faith in the things she believes in. Despite going through the hardest moment of her life, she still finds the inner strength to keep her faith in God and to believe in the power of books and theatre. “I believe the characters we read on the page become more real than the men who stand beside us.” That would take a lot for someone to still believe in especially after what happened.

This is an excellent breakthrough film for Pablo Llarain. This is his first English-language feature and he does a very good job in directing the story and scenes. Also done well is the script from writer Noah Oppenhein. He’s most famous as the scriptwriter for The Maze Runner. Jackie is a big change of pace for him. It’s very common nowadays to do films of a certain famous person and have it focus on a certain brief period of their life instead of the common biography-style film you’d expect. It’s done many times in films like The Queen, Capote and Sophie Scholl: The Final Days. It’s also a difficult challenge because in doing so, they have to construct a story that looks like it sums up the protagonists lifetime in that brief period of time. Oppenheim succeeded in constructing a very 3D Jackie Kennedy in that brief period of her life.

It’s not just Oppenheim’s story of Jackie that worked well but also the performance of Natalie Portman. At first, I was skeptical of the idea of having Portman play Jackie Kennedy. She did not come as the type of personality to play her at first. However Portman did an excellent job in her portrayal of Natalie and portraying the personal traits and feeling of Jackie in the scenes of the story. The film also shows an excellent maturity in the acting of Natalie Portman. Sometimes we forget she was 35 when she was filming this film and Jackie Kennedy was 34 when this incident happened. This film shows Natalie’s acting maturity very well. For all intents and purposes, Jackie Kennedy was the role with the most depth and range in the film. Nevertheless there were supporting performances that delivered well despite their limited range, like Peter Saarsgard and Bobby Kennedy and Greta Gerwig as Nancy Tuckerman. The costuming from Madeline Fontaine and the music from Mica Levi also added to the quality of the film.

Jackie did justify its big screen format in the end. It’s an excellent film about carrying grace under such devastating heartbreak and reminded us why we admire Jackie Kennedy so much.