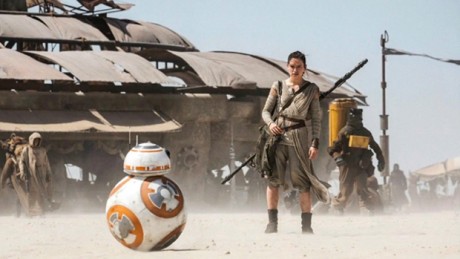 Star Wars: The Force Awakens has a lot to offer fans of the Star Wars series including new characters like BB-8 and Rey (played by Daisy Ridley).

It never fails with me. I have the habit of ‘waiting until the crowds die down’ to see a blockbuster movie. I don’t think it’s the right thing to do when it involves a Star Wars movie, especially not Star Wars: The Force Awakens. I saw it three weeks after its release. I’m glad I finally saw it.

I won’t explain the story line like I do in most reviews, especially since most of you have already seen it by now, unless of course you’ve been under a rock. One thing about this movie is that it wasn’t just simply bringing another volume of the Star Wars series to the screen. The film’s job was also to bring back the magic of Star Wars people have come to know and love. No kidding the first three Star Wars movies from 1977 to 1983, those that are now referred to as episodes 4 to 6, captivated the world. Watch any one of them nowadays and you’ll see why.

However when George Lucas did the three prequels from 1999 to 2005, many fans felt something was missing. No doubt The Phantom Menace had huge expectations but they missed them and disappointed a lot of fans. Attack Of The Clones tried to be better but still something was noticeably missing. The scene of the fighting Yoda added excitement but it was one small added element. Revenge Of The Sith was the best of the prequels but the feel of Star Wars was still not there. I think it was best summed up by my sister who’s a huge Star Wars fan: “George Lucas knows how to direct sci-fi but he doesn’t know how to direct actors.” Good point because it’s been proven in other action movies or sci-fi movies in the past that special effects no matter how dazzling cannot overtake a lousy story or lousy acting.

Now we should remember that The Force Awakens or Episode Seven was actually thought up by George Lucas way back in the 1970’s as he was dreaming out and writing out the whole Star Wars series. Lucas made it clear after Revenge Of The Sith he will no longer direct Star Wars movies. In fact he sold LucasFilm to the Walt Disney Company in 2012. The first thing Disney did was bring The Force Awakens on screen. The director they hired was J.J. Abrams who has an extensive resume in writing and directing thrillers and sci-fi like Armageddon, Mission Impossible III (his directorial debut), Super 8 and the last two Star Trek movies. Hired to adapt the story to screenplay was Abrams, Lawrence Kasdan who co-wrote the scripts for Empire Strikes Back and Return Of The Jedi but didn’t help co-write any of the prequels, and rising writer Michael Arndt.

The mix turned out to be the right chemistry as it was able to bring the magic of the story back to life. The recreation of the two worlds also worked excellently. There was however one challenge I feel it didn’t overcome. That was when they brought back Harrison Ford as Han Solo, Carrie Fisher as Princess Leia, and Mark Hamill as Luke Skywalker. There were a few times that I felt that instead of adding to the latest Star Wars story, it almost made it seem like a ‘Star Wars reunion.’ Even adding C3P0, Chew and R2D2 in there also added to that feeling this was like a ‘reunion” I don’t know if the huge following of Star Wars had a lot to do with why I felt that it seemed like a ‘Star Wars reunion’ but that’s how I felt.

One thing I have to say is the best thing about this Star Wars story are the new elements and the new characters of the story. One thing you hope to get with each Star Wars film are new characters that are able to charm us whether it be the philosopher Yoda in The Empire Strikes Back or even villains like Jabba The Hutt in Return Of The Jedi. Here was get appealing characters like Rey and Poe Dameron and even villains like Kylo Ren. I don’t know if they will deliver the same craze Luke, Leia and Han first did but moviegoers have welcomed them to the Star Wars saga. In addition we have a plot twist in this film as Storm Trooper Finn deserts his duty to fight against the Dark Side. That’s a key element leading into Episode Eight in anticipation in what will happen next.

In addition, adding BB-8 to the Star Wars saga was a plus. Usually adding in something cutesy to the Star Wars Saga is a risk. C3P0 and R2D2 had a big part in making the first Star Wars‘ greatness. The Ewoks of Return Of The Jedi helped make the story. However Jar Jar Binks of The Phantom Menace was too irritating and had a lot to do with that episode’s constant panning. BB-8 was cute but he was more the cute one would welcome and be entertained by rather than easily get irritated with. BB-8 actually added to the quality of The Force Awakens. Even the scenes where R2D2 meets BB-8 for the first time come across as funny instead of ridiculous.

It’s not to say the older elements weren’t good. They may not have stood out like the newer elements but they still fit the movie excellently. I know I talked about bringing Harrison Ford, Carrie Fisher and Mark Hamill back made it feel like a ‘Star wars reunion’ but they were intended to be in the story from the start and intended to age 30 years. I can’t think of anyone else who could play their characters. The Dark Side and its darkness still maintained its mystery and villainous feel. The battles were also excellent to watch. Oh yes, the light saber battles. You can’t have a Star Wars episode without light saber battles. There weren’t as many this time around but they still dazzled.

I will have to say J.J. Abrams succeeds with flying colors in directing and co-writing the latest in the Star Wars saga. He’s proven in the past he can direct sci-fi and direct actors and he was the right man to take over the Star Wars series right after George Lucas let it go. The acting was not stellar but it was very good. The best acting came from those performing the ‘new roles’ like Daisy Ridley, Adam Driver, John Boyega and Oscar Isaacs. Driver especially delivered an unpredictable villain. The set designs fit the movie perfectly and were able to replicate the ships, planets and lands of the story perfectly. The visual effects were top notch again and worked the movie excellently. And of course they had to bring back John Williams as the score’s composer. Even at 83, Williams is still at it. It seems as though there’s no other composer who can do it for Star Wars and he delivers again.

Without a doubt the biggest news about Star Wars 7 is all the box-office records it’s breaking. It already broke the opening weekend record with $247.9 million: almost breaking the quarter-billion barrier. It would go on to break the North American total box office record held by Avatar on January 5th: the very day I saw it! It now stands at $879.3 million and currently sits at #2 at the box office. Worldwide it sits at $1.94 billion currently and appears poised to break Avatar’s record of $2.788 billion. Only time will decide that.

Star Wars: The Force Awakens is a very good addition to the Star Wars series. Not only that but it brings back a lot of the Star Wars magic that appeared missing from the prequels. What can I say? Star Wars mania is back and rightly so.